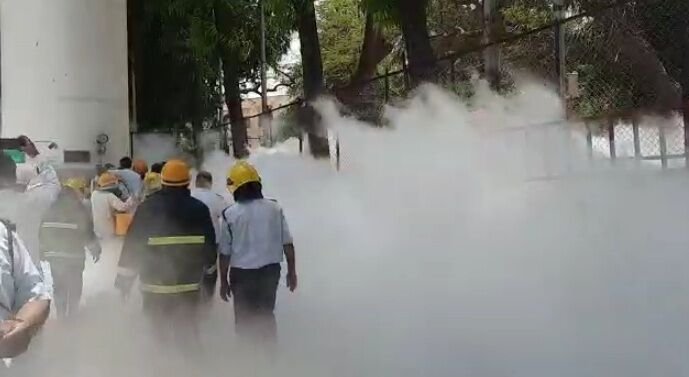 In a horrific incident, at least 22 Covid-19 patients on ventilators died at a hospital in Nashik, Maharashtra, when their oxygen supply was interrupted by a leak in a supply line. (IANS photo)

NEW DELHI — Twenty-two COVID-19 patients on ventilators died in a hospital in western India April 21 when their oxygen supply was interrupted by a leak in a supply line, officials said.

Suraj Mandhar, the district collector, said the supply of oxygen has since resumed to other patients.

Fire officer Sanjay Bairagi said the leak was halted by the fire service within 15 minutes, but there was supply disruption in the Zakir Hussain Hospital in Nashik, a city in Maharashtra state that is the worst hit by the latest surge in coronavirus cases in the country.

Surinder Sonone, a police officer, said the leak occurred in a pipe connecting the oxygen supply to the main tank in the hospital complex.

Five of the 140 COVID-19 patients were shifted to another hospital, he said.

India has reported a new record 295,041 coronavirus cases, as the daily death toll crossed 2,000 for the first time.

Even with hospitals struggling, Prime Minister Narendra Modi April 20 advised state governments against imposing a harsh lockdown in favor of micro-containment zones as he sought to avoid another economic slump.

The surge in India has exacerbated the slowdown in global vaccination campaigns. India is a major vaccine producer but was forced it to delay deliveries of shots to focus on its domestic demand. So far, India has administered over 130 million doses of vaccines in a nation of nearly 1.4 billion since mid-January.

Overall, India has reported more than 15.6 million confirmed cases, the second highest behind the United States. The number of deaths stood at 182,553.

In related news, France will impose new entry restrictions on travelers from India to fight a contagious coronavirus variant spreading in that country, an official said April 21.

The restrictions come in addition to those previously announced regarding four other countries — Brazil, Argentina, Chile and South Africa — that will be implemented starting from April 24.