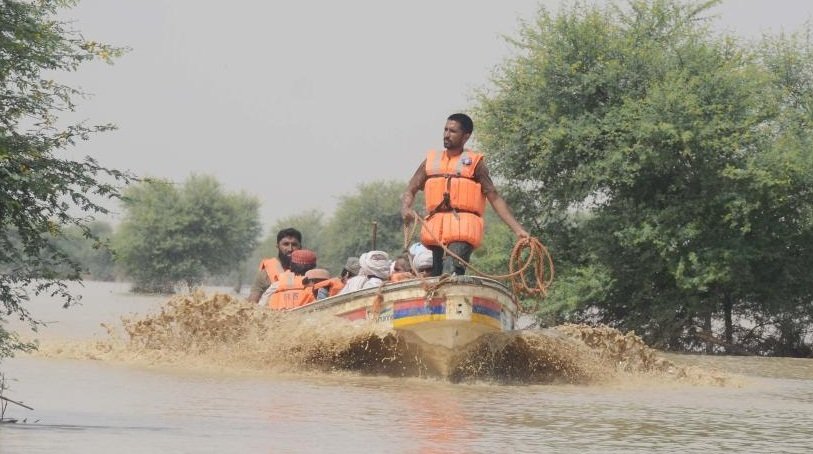 At Mohenjo-Daro alone, the record rain has damaged excavated areas and exposed the ones buried underneath by creating furrows in them, Dawn news reported.

The accumulated water has seeped into the excavated areas, loosening the soil, and tilting the walls.

This site, among the primary surviving bastions of the Indus Valley Civilization as it dates to 2,500 B.C., is one of the last remaining connections Pakistan has with prehistory.

The Mound of the Dead, one of Mohenjo-Daro’s most iconic features, is covered in blue tarpaulin.

The torrential rain that has left most of Sindh inundated has not spared these ruins either, or workers scramble to reinforce the retaining wall of the mound as water seeps down into the unexcavated parts of the site, carving channels as it goes.

While the government and welfare organizations battle to provide relief and rehabilitate the hundreds of thousands left homeless by the savage monsoon downpours, heritage and archaeological sites across the province are also in dire need of repair.

Reports emanating from various parts of the province paint a bleak picture; the very forts, and tombs that symbolize the glorious past of the region are now in danger of crumbling.

Apart from that, the Buddhist stupa at Thul Mir Rukan has fallen victim to the inclement weather as its drum has been broken.

The floods have not spared the famous Makli monuments in Thatta and Banbhore either, both internationally renowned archeological sites.