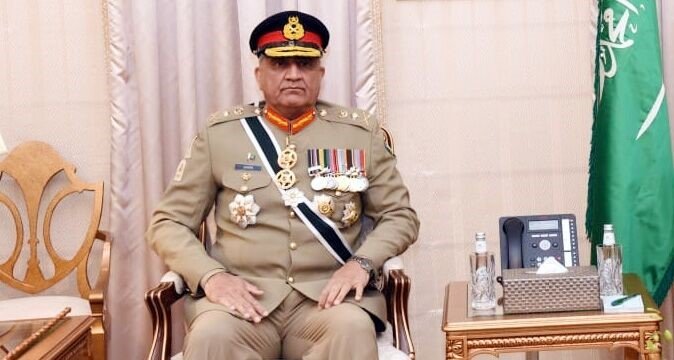 Pakistani Army chief General Qamar Javed Bajwa March 18 called for burying the past and moving forward, saying that Kashmir holds the key to peace in all of South Asia, a region that is home to a quarter of the world’s population. (iamCOAS/Twitter photo)

ISLAMABAD — Pakistan’s powerful army chief on March 18 urged for a peaceful resolution in the disputed region of Kashmir and for peace talks with archrival India, a rare conciliatory call amid a weeks-long cease-fire across the volatile territory.

Unsettled disputes between the two South Asian nuclear rivals are “dragging this region back to the swamp of poverty and underdevelopment,” said Gen. Qamar Javed Bajwa, addressing a gathering of scholars and experts discussing national security issues at a seminar in the capital, Islamabad.

The disputed Himalayan region is split between Pakistan and India but claimed by both in its entirety. The two countries have fought two of their three wars over Kashmir since gaining independence from Britain in 1947.

The March 18 call comes as the militaries of Pakistan and India pledged in February to halt cross-border fighting in Kashmir and adhere to a 2003 accord that has been largely ignored. Since then, the cease-fire has been holding, enabling residents to freely move in the region.

Bajwa called for burying the past and moving forward, saying that Kashmir holds the key to peace in all of South Asia, a region that is home to a quarter of the world’s population.

“It is important to understand that without the resolution of the Kashmir dispute through peaceful means, the process of sub-continental rapprochement will always remain susceptible to derailment,” he said.

Also speaking at the gathering was Pakistani Foreign Minister Shah Mahmood Qureshi, who said that “if India took one step forward for peace, Pakistan will take two.” He however, claimed “India chose to take several steps backwards … (with) South Asia once again teetered on the brink.”

The bitter relations between Pakistan and India were further strained in 2019, when Pakistan’s military shot down an Indian warplane in Kashmir and captured its pilot, responding to an airstrike by Indian aircraft targeting militants inside Pakistan. India at the time said the airstrikes targeted Pakistan-based militants responsible for a suicide bombing that killed 40 Indian troops in the Indian-controlled part of Kashmir.

The escalation halted peace efforts between Islamabad and New Delhi. Also, Pakistan wants India to reverse a 2019 move under which New Delhi stripped Kashmir’s semi-autonomous status and imposed a slew of administrative changes through new laws, touching off anger on both sides of the frontier.

India accuses Pakistan of arming and training anti-India rebels in Kashmir and also helping them by providing gunfire as cover for incursions into the Indian side, a charge Pakistan denies. Rebels in Indian-administered Kashmir have been fighting Indian rule since 1989.