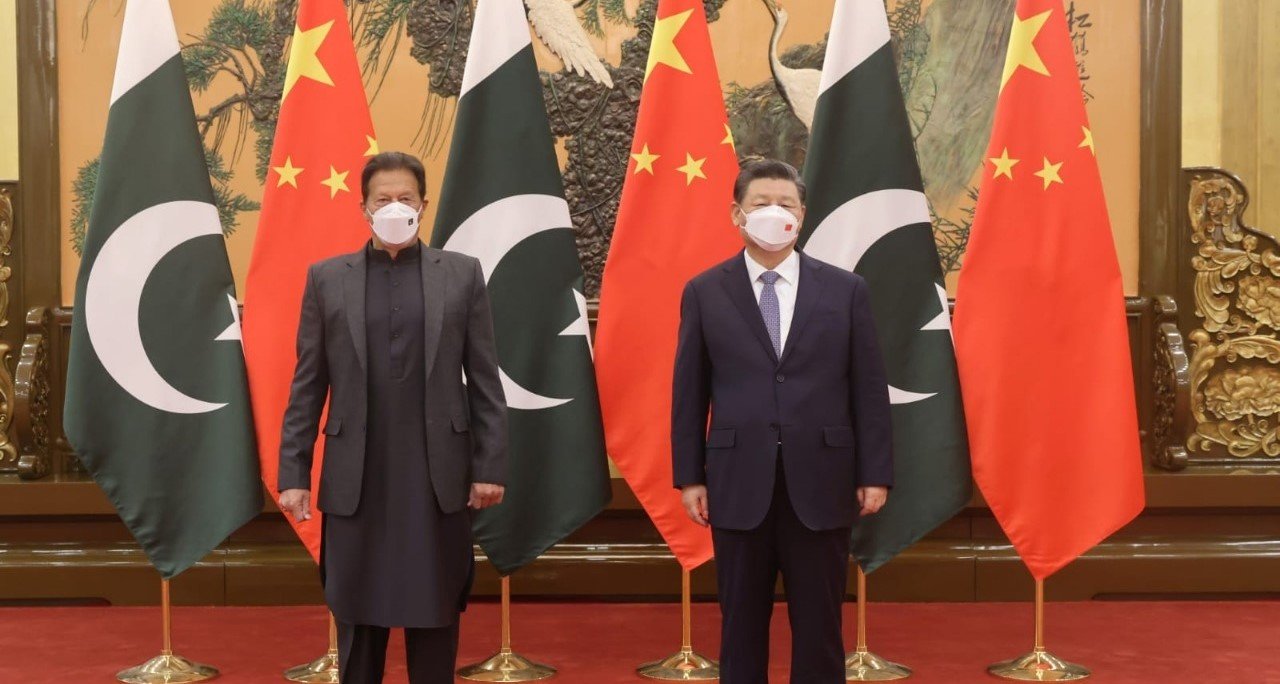 China has agreed to extend several loans to Pakistan but China will be promoting its own agenda even as the debt burden of Pakistan increases. Seen above, Prime Minister Imran Khan and Chinese President Xi Jinping. (IANS photo)

Pakistan’s Prime Minister Imran Khan was on a four-day visit to China last week. Apparently, the visit was billed as to attend the opening ceremony of the Winter Olympics in Beijing. But Khan was accompanied with a huge delegation including Pakistan’s Foreign Minister, Finance Minister, Planning Minister, Information Minister, National Security Advisor, Commerce Advisor and Special Assistant on China-Pakistan Economic Corridor (CPEC).

However, the Pakistan Prime Minister and his team were left red-faced when they were informed that one of the key meetings would be held in virtual mode, though the Pakistani delegation was present in Beijing.

The meeting with He Lifeng, chairman of China’s National Development and Reform Commission (NDRC) and vice chairman of the Chinese People’s Political Consultative Conference was held virtually. This indeed was a completely undiplomatic step by China and was perhaps taken by it to show Pakistan and its leadership its place.

Khan’s China visit comes at a time when Pakistan finds itself in a quagmire of issues. On one hand, Pakistan’s economy is turning from bad to worse, and on the other the security scenario within the country particularly in the restive Balochistan region and Afghan border has added to Khan’s troubles.

Pakistan is currently facing severe economic difficulties due to high inflation and no foreign aid. To ease the pain, Khan has requested for a $5 billion loan from China and pushed for increased trade and cooperation along the CPEC. The Corridor, an infrastructure project initiated in 2015, to promote trade and development, has so far performed below expectations. It also suffered a jolt when China stopped the work on the Dasu Hydropower Project after 9 Chinese nationals were killed in an explosion in the Khyber Pakhtunkhwa province.

Launched in 2015, the CPEC is the flagship project of China’s Belt and Road Initiative (BRI). It was expected to bring in massive investment from China, creating thousands of job opportunities for the people of Pakistan. However, Khan’s regime has witnessed the stalling of the CPEC projects owing to the dire economic situation and non-cooperation of the bureaucracy due to the prevailing fear of the National Accountability Bureau (NAB).

Other reports state that Pakistan plans to seek $5 billion from China and $1 billion each from Russia and Kazakhstan. It is pertinent to mention here that Pakistan has also been striving to get the suspended loan programme worth $6 billion revived from the International Monetary Fund (IMF).

However, these loans are unlikely to help, as they will only add to Pakistan’s growing debt obligations. Beyond loans, China will likely promote its own agenda. Also, it may do little to solve Pakistan’s long-term economic problems. Instead, it may burden it with public discontent and protests, as the government and the CPEC has so far been unable to deliver the promised benefits, particularly to the local populace in provinces where CPEC footprint is stronger.

Prior to his China visit Imran Khan had done his homework and tried to address the Chinese criticism of delays in CPEC projects. Khan had ordered the removal of 37 regulations hindering the pace of the CPEC projects, and reaffirmed his commitment to the timely completion of different projects.

The ambitious CPEC connects China’s northwest Xinjiang Uyghur Autonomous region and the Gwadar port in the Baluchistan province of Pakistan, covering a distance of 3,000 kilometres and a range of new infrastructure projects. India has repeatedly protested to China over the CPEC as it is being laid through the Pakistan-occupied Kashmir (PoK).

Last year, a report by US-based international development research lab AidData had reported that a substantial chunk of Chinese development financing under the CPE comprised loans which have been given at current commercial market interest rates as opposed to grants, which is a norm for bilateral infrastructural projects.

The Pakistani daily Dawn had earlier printed excerpts of the report, according to which Pakistan received about half of all Chinese development finance in the form of ‘export buyer’s credit’ and was to be used by Pakistan to pay Chinese implementation partners and purchase of equipment by them.

In its editorial in September last year Dawn had commented that the nature of Chinese financing for infrastructural schemes merits greater transparency for the projects executed in Pakistan since 2015. It further said that after coming to power Imran Khan’s government has also kept the matters under wraps, just as his predecessors had done.

In his meetings with the Chinese President Xi Jinping and Premier Li Keqiang, Khan also briefed them on his geo-economics vision and the government’s policies for sustained growth, industrial development, agricultural modernisation and regional connectivity.

During his meetings, Khan also highlighted that Indian atrocities in Indian Kashmir and said the persecution of minorities in India were a threat to regional peace and stability. He said that rapid militarization of India was undermining regional stability; he also cited India’s aggressive behavior and the prevailing Hindutva ideology as a threat to regional peace and a cause of lingering instability of the region.

Khan’s remarks came in an exclusive session with the heads and representatives of leading Chinese think tanks, universities and the Pakistan Study Centre in Beijing.

Regarding Afghanistan, both leaders acknowledged that a peaceful and stable Afghanistan would promote economic development and connectivity in the region and called on the international community to promptly assist the Afghan people in averting a humanitarian catastrophe. He recalled that Pakistan in the past had played a role in building bridges and remained ready to do so again.

During the visit, Pakistan also signed a new agreement with China to start the second phase of the $60 billion CPEC. The Prime Minister showered praise on the controversial projects under CPEC, saying it has strategic significance for both the countries and delivering tangible benefits to the people. This is in contrast to his earlier views on CPEC before coming to power criticising its secret nature and investments.

In his statements in Beijing, Khan didn’t utter a word about the Uyghur Muslims of Xinjiang province of China and the atrocities committed against them by Chinese authorities. Last year, in an interview he had said that the Pakistan government understands the Chinese policy in Xinjiang very well, which is for the betterment of its people and is more concerned about the situation on its borders i.e. Kashmir.

One fails to wonder why Khan who was a critic of OPEC earlier, is now endorsing it. Perhaps he doesn’t fathom that through CPEC China wants to manage a foothold in Afghanistan via Pakistan, as most of the Chinese companies, which are involved in developing CPEC are related to mining, infrastructure development, minerals and mine technology, and they might have plans on how to tap the mineral reserves of Afghanistan which is reported to be around $1.3 trillion.