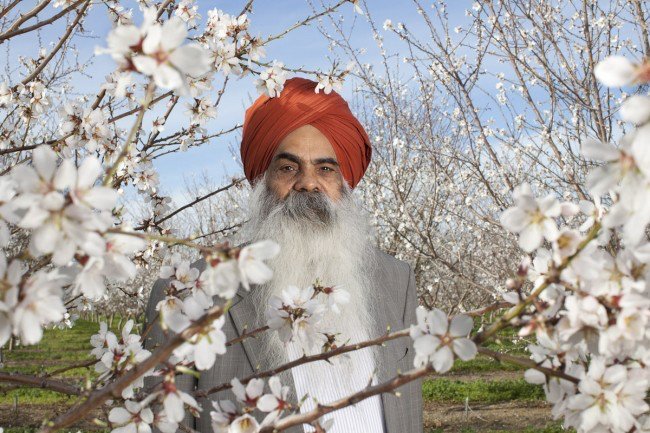 YUBA CITY, CA – Didar Singh Bains known as the Peach King of California and one of the richest Sikh farmers in North America, died at his home on September 13. He was 84. Bains is survived by wife Santi,  sons Ajit and Karmdeep and daughters-in-law Carmen and  Harpreet; daughter Diljit and son-in-law Avtar.

His passing was mourned in Yuba City where he farmed, lived and served the community as well as in Punjab and Sikh circles.

Bains was born in 1938, in Nangal Kurd, District Hoshiapur. He immigrated to the US in 1958 and began life here as a farm laborer. He tilled and toiled over a land that reminded him of fields in Punjab. Years later, his perseverance and focus was to make him the largest independent peach grower in the world. With lands spread across the US, India and Canada he diversified growing raspberries, blueberries, black currants, prunes, walnuts, almonds, and grapes. He became the second largest cranberry grower for the Ocean Spray brand.

Bains was also deeply religious, serving at the Stockton Gurdwara and then becoming one of the 26 founding members of the Yuba City Gurdwara. In 1980, he started the Yuba Nagar Kirtan, which is now a massive and annual event.

His activities were keenly monitored when after Sikhs fled India after the 1984 riots, he reached out to help. Reports say he had lawyers stationed in the Bahamas to aid their immigration to the US. On their arrival, they were sure to find jobs on his various farms. But Bains was clear, he was helping on humanitarian grounds and extended the same support to militants and those who were not. He is also said to have made clear he had nothing to do with separatist politics, and that humanitarian assistance is what was of interest to him.

The outpouring of grief from Sikh-affiliated institutions was immediate upon learning of his passing. The Shiromani Akali Dal tweeted,  “Akali Dal Gurdwara Yuba City California founder, eminent social worker and patron of many other Sikh institutions. The entire Shiromani Akali Dal expresses deep sorrow on the demise of Didar Singh Ji. May the good soul rest at His feet.” The Shiromani Gurdwara Parbandhak Committee has also tweeted its deep sorrow.

Bains’ son and Sutter County District 4 Supervisor Karm Bains told the media,  “He laid a foundation not only for his family, but also the entire community… He was the epitome of a selfless servant. He was inspirational. He served his faith, the community and was an inspiration to all. It’s all about hard work. Live an honest and hard-working life to share with others in need or your neighbors, but always be thankful.”

The funeral will be held on September 18, at River Valley High School, in Yuba City and is open to the public. Antim ardas will be at 1 p.m. at the Sikh Temple Gurdwara in Yuba City.