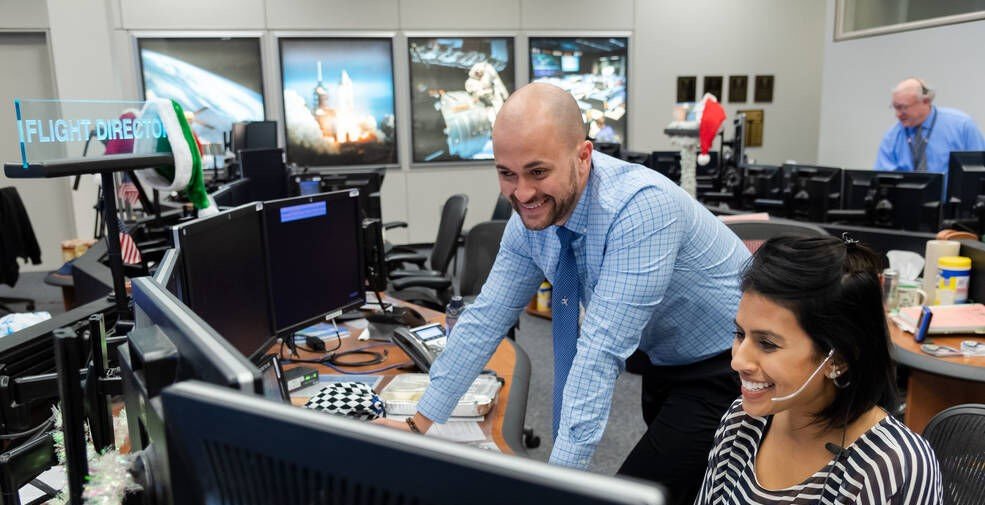 NASA flight directors Marcos Flores and Pooja Jesrani, along with their team of flight controllers, monitor operations on the International Space Station on Dec. 24, 2019. The achievements of Jesrani, the first Indian American and South Asian woman NASA flight director, will be featured in a new ABC docu-series, “Our America: Women Forward,” premiering March 8. (NASA/Robert Markowitz photo)

“Our America: Women Forward,” a multiplatform docu-series produced by ABC-owned television stations, celebrates women across the country, sharing their stories of perseverance, hope and triumph.

Viewers tuning in to their local ABC newscast will meet women from their communities rising above obstacles and barriers rooted in sexism to achieve personal and professional success, said ABC.

Since the first NASA flight director was named in 1958, there have fewer than 100 flight directors. Flight directors are responsible for leading teams of flight controllers, research and engineering experts, and support personnel around the world, and making the real-time decisions critical to keeping NASA astronauts safe in space.

Jesrani was born in England but immigrated to Houston, Texas, when she was a child. Jesrani began interning with United Space Alliance (USA) before graduating from the University of Texas at Austin with a bachelor’s degree in aerospace engineering in 2007.

In her work with USA and later NASA, she has supported the space station flight control team in many positions, including managing the life support and motion control systems, and then as a capsule communicator, speaking directly with the astronauts in space, according to NASA.

Jesrani is in charge of mission control at the Johnson Space Center in Houston and also partners with agencies around the world.

Jesrani’s story will be featured under the theme: “The Trailblazer,” which represents women “who dare to go where they have never gone before.”

Other women featured include Bushra Amiwala, the youngest Muslim elected to public office in the country, having served on the Skokie School District Board of Education in Illinois; Nicole Mann, a NASA astronaut, who is training as part of the Artemis Program, a NASA program that will land the first woman and next man on the moon by 2024; Patrice Banks, an engineer-turned-mechanic, who in 2016 founded the Girls Auto Clinic, a full-service auto repair center with female mechanics; and Kimberly Bryant, electrical engineer and founder of Black Girls Code.

The five-part series airs daily from March 8-12 and culminates in an hourlong documentary narrated by talk show host Tamron Hall, airing the weekend of March 13.