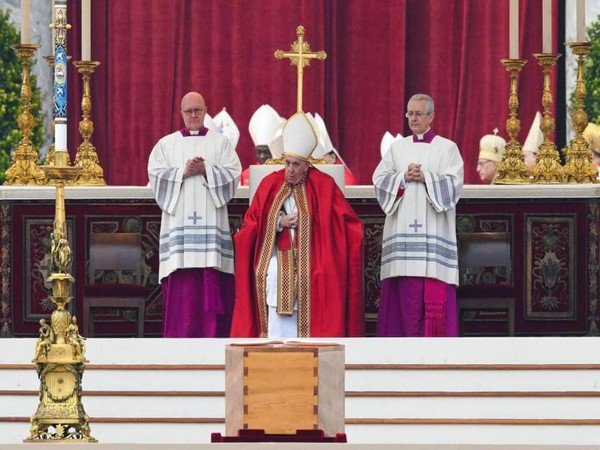 ROME, (ANI) – Pope Francis on January 5 paid tribute to his predecessor, Pope Benedict XVI, at his funeral at St. Peter’s Square, which was attended by a sea of mournersN.

It was the first time that a Pope presided over the funeral of his predecessor. Benedict is the first Pope in about 600 years to resign from his position rather than holding office for life. Benedict died on December 31, aged 95, at a monastery in Vatican City.

His funeral was a simple event, as per the pope’s wishes. Father James Martin, a Jesuit priest, as quoted by CNN said: “It’s difficult to have a simple service in St. Peter’s Square, but I think it was. You have to have some pomp and ceremony for a former pope, but I think within the guidelines of what Pope Emeritus Benedict wanted, it succeeded very well.”

According to Vatican spokesperson Matteo Bruni, Benedict’s funeral was attended by about 50,000 people. He was named Pope Emeritus during his funeral, but the language of some prayers was different because he was not the reigning Pope when he died.

Pope Francis led the mass. The crowd later took part in a Communion.

Delivering the sermon, Pope Francis said, “God’s faithful people, gathered here, now accompanies and entrusts to him the life of the one who was their pastor.”

“Like the women at the tomb, we too have come with the fragrance of gratitude and the balm of hope, in order to show him once more the love that is undying. We want to do this with the same wisdom, tenderness, and devotion that he bestowed upon us over the years. Together, we want to say, ‘Father, into your hands we commend his spirit'”, Francis said. “Benedict, a faithful friend of the Bridegroom, may your joy be complete as you hear his voice, now and forever,” Pope Francis added.

Benedict’s coffin was carried through the Basilica and transferred to the Vatican crypt for burial.