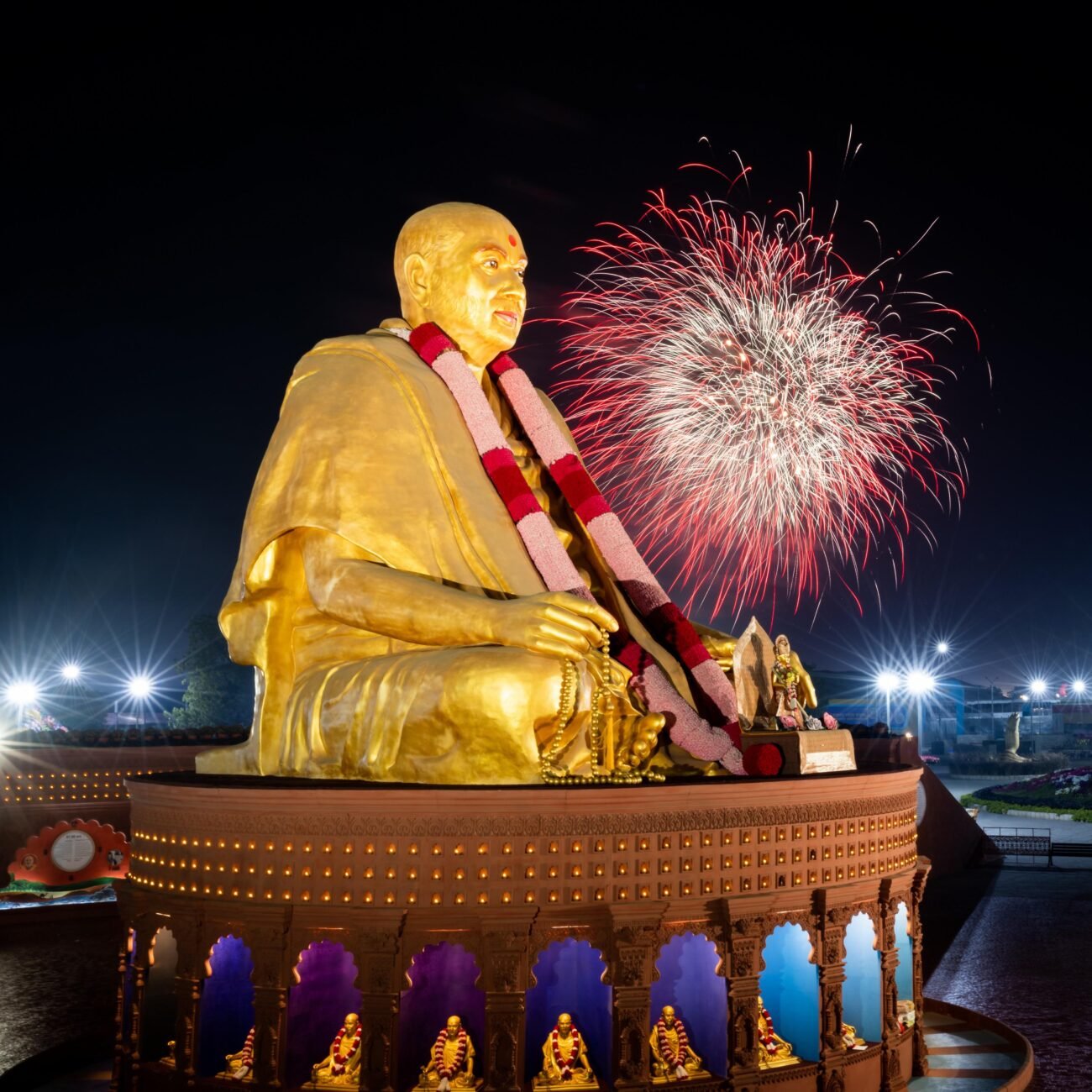 AHMEDABAD – On January 15, Pramukh Swami Maharaj was given a grand devotional tribute in the closing ceremony of the centenary celebrations in the divine presence of Mahant Swami Maharaj.

The month-long festival saw over 12.1 million people visit the exhibitions and attractions at Pramukh Swami Maharaj Nagar where a variety of exhibitions, attractions, seminars, films, and shows, each imparting a unique lesson from the inspiring life of Pramukh Swami Maharaj was held. Millions watched, live, the evening assemblies held every day for the past, a press release said.

A blood donation drive was also organized over the month-long festival, during which over 5.6 million cc of blood was donated. Hundreds of thousands of people were impressed and humbled by the ornate main gate, Pramukh Swami Maharaj’s 30-foot sculpted image, the replica of Swaminarayan Akshardham, the enchanting glow garden, the light and sound show, the Women’s Empowerment Pavilion and other exhibitions.

After visiting the exhibitions, many were inspired to give up addictions and strive for family harmony, said the release. After watching the shows at the Bal Nagari, 250,000 children resolved to respect their parents, study sincerely, and become ideal citizens of the world.

All who visited were in awe of the 45 departments and 80,000 volunteers inspired by Mahant Swami Maharaj who made Pramukh Swami Maharaj Nagar possible,  the release added.

The closing ceremony titled, ‘We Will Not Forget You’ also drew hundreds of thousands of devotees from around the world. The assembly began with the singing of devotional hymns followed by the grand entrance of Mahant Swami Maharaj on a decorated chariot as youth danced on stage to him.

Selected devotees shared their personal experiences with Pramukh Swami Maharaj and how they will never be able to forget him for what he has done for them and their families.

Senior BAPS swami Viveksagardas Swami then spoke about Pramukh Swami Maharaj’s life and the physical and mental sacrifices he made for everyone in society and said his travels were for the joy and betterment of others.

Abu Dhabi Mandir project head Brahmaviharidas Swami spoke about Pramukh Swami’s construction of temples and their global footprint. After a video about the significance of BAPS temples, senior BAPS swami and mahant of Gandhinagar Akshardham Anandswarupdas Swami explained how Pramukh Swami changed society’s landscape through festivals. A video introduced the festivals he had inspired.

The last part of the grand finale program focused on the impact of Pramukh Swami on the future with each senior swami of the BAPS Swaminarayan Sanstha speaking about a quality of Pramukh Swami: Ghanshyamcharandas Swami began with a prayer, Tyagvallabhdas Swami spoke about his devotion to Bhagwan Swaminarayan and his gurus, Bhaktipriyadas Swami on saintliness, Swayamprakashdas Swami  illustrated how everyone was viewed equally and  Ishwarcharandas Swami on his endearing humility.

After a powerful video introducing Mahant Swami Maharaj through testimonials, he said,” We saw in today’s assembly that Pramukh Swami Maharaj had cared for everyone. Thus, everyone felt that he is mine. That is why none can ever forget him, not today and not thousands of years hence.

“Pramukh Swami Maharaj had God in every pore. He was Aksharbrahma. He has not and will not ever leave from this Earth. He is with us today and will forever remain with us. “Pramukh Swami Maharaj’s centenary was celebrated in a grand and divine way. By Bhagwan Swaminarayan’s grace, the festival has been completed without a hitch. By celebrating this festival, we offered our devotion to our guru. We should never forget this. This festival was not celebrated to show anyone or increase our glory.

The celebrations concluded with a mass maha-arti, a colorful dance by youths and fireworks.