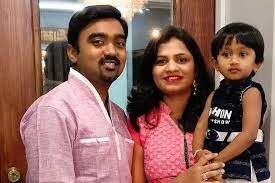 NORTH ARLINGTON, N.J. — A New Jersey man stabbed his wife to death before he was found dead himself in a home in which a young child was found unharmed, authorities said.

Prosecutors in Bergen County said April 9 a neighbor called North Arlington police shortly after 5:30 p.m. on April 7 to report that she had looked through the mail slot in the front door and had seen two people lying on the floor in the living room area.

Police entered the home and found 33-year-old Balaji Rudrawar, and his wife, 31-year-old Aarti B. Rudrawar, deceased, both with multiple stab wounds. “A young child was also located in the apartment but had not been harmed,” prosecutors said.

NJ.com reported that the man’s father told the Press Trust of India that the woman was pregnant. Authorities Wednesday declined comment on that report.

“My daughter-in-law was seven months pregnant,” Bharat Rudrawar told the news agency. “We had been to their house and were planning another trip to the U.S. to be with them again.”

Gobindsingh Nihalani, a friend of the couple who was organizing an online fundraiser, told NJ.com that the husband worked for an information technology company.

India-West Staff Reporter adds: Nihalani said efforts were being made to reunite the child with her grandparents. The GoFundMe page, which identified the child as a 4-year-old girl, had raised more than $98,000 by April 10 evening.

The Rudrawars were described as “a couple of few words but many smiles,” by Nihalani.

Nihalani also said the husband worked for the information technology company Larsen & Toubro. The infotech company, based in India, did not immediately respond to an email seeking comment.