HomeArts/BooksRediscovered Drawing by Michelangelo to be Auctioned 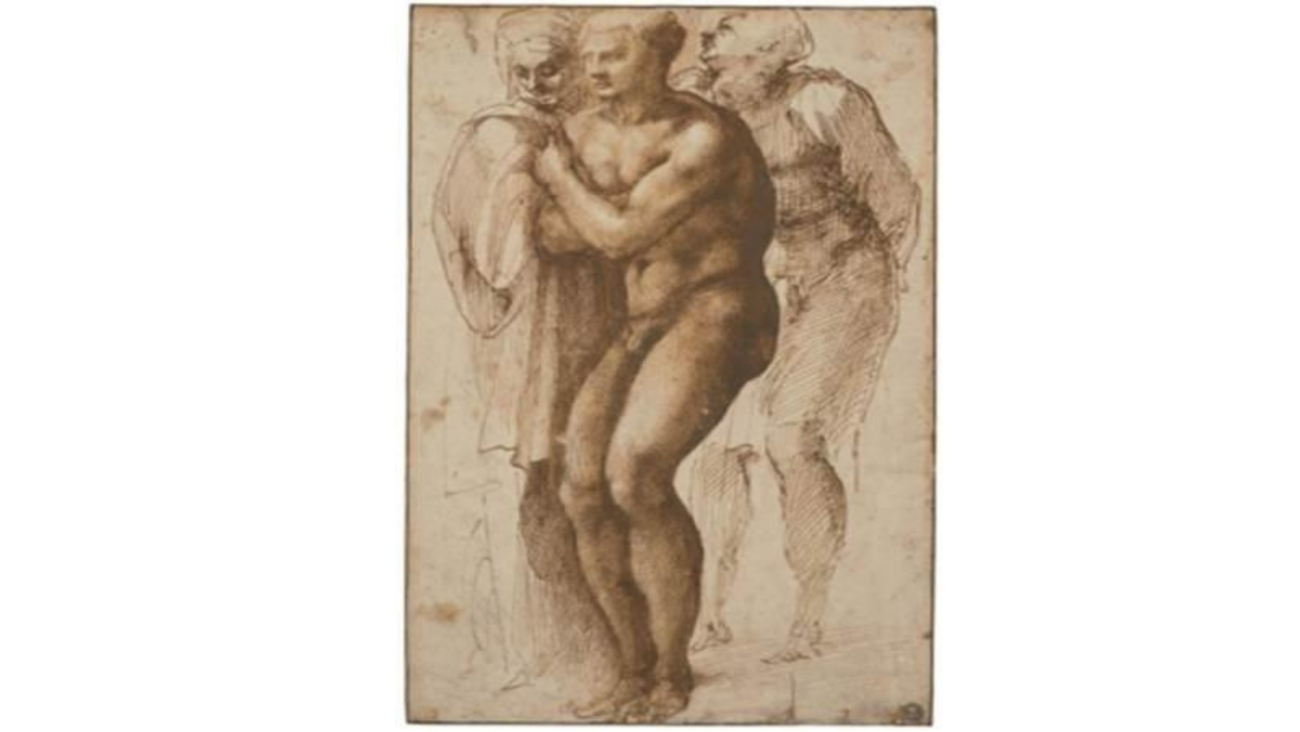 NEW YORK, NY – Christie’s has announced the sale of a previously unseen drawing by Michelangelo, ‘A Naked Young Man’ (after Masaccio) surrounded by two figures, completed early in his career. This extremely rare work, one of the very few drawings by Michelangelo still in private hands, will be auctioned in May.

The work, which came to the market from a private French collection, was designated a French National Treasure, which initially prohibited its export from the country for a period of thirty months. The French government recently removed this designation and granted an export license, allowing the drawing to be sold to collectors worldwide without restriction. Michelangelo’s drawing will be exhibited in Hong Kong and New York before being sold in Paris.

Furio Rinaldi, then a specialist in Christie’s department of Old Master Drawings, identified the drawing as Michelangelo’s in 2019. Paul Joannides, Emeritus Professor of Art History at Cambridge University and author of complete catalogues of drawings by Michelangelo and his school in the Ashmolean Museum, Oxford, and the Musee du Louvre, later studied the original and supports the attribution. The drawing, which was sold in 1907 at the Hotel Drouot in Paris as a work of Michelangelo’s school, escaped the attention of all scholars until its recent rediscovery.

This drawing, by the young Michelangelo in Florence at the end of the 15th century, is likely the artist’s earliest surviving nude study. The central figure of the work is a recreation of the shivering man depicted in Masaccio’s Baptism of the Neophytes, one of the most famous frescoes from the Santa Maria del Carmine Church in Florence (1401-1428).

Michelangelo created several other studies after Masaccio, including a drawing at the Staatliche Graphische Sammlung in Munich and another at the Albertina in Vienna, as well as a drawing after a Giotto fresco at the Louvre.

Michelangelo transforms Masaccio’s figure with two shades of brown ink, enhancing the man’s musculature and creating a more powerful and robust figure that foreshadows his most famous representations of the human body, such as his monumental marble David at the Galleria dell’Accademia in Florence and his two Slaves at the Louvre. Michelangelo later added two figures behind the shivering man in a completely different, more energetic style, unrelated to Masaccio’s original composition.

The sale of this large and well-preserved drawing joins the ranks of other major works on paper offered at Christie’s auctions, including Raphael’s Head of a Muse, which sold in London for more than $38 million in 2009; Leonardo da Vinci’s exquisite Head of a Bear, which achieved nearly $11.8 million in 2021; and a rare nude male study by Michelangelo, which sold in London in July.

Cecile Verdier, Chairman, Christie’s France: “Everyone at Christie’s involved in this sale is deeply honored by the opportunity to present a work of this magnitude. A major discovery in the History of Art, the sale of this drawing is also a momentous event for the art market.”