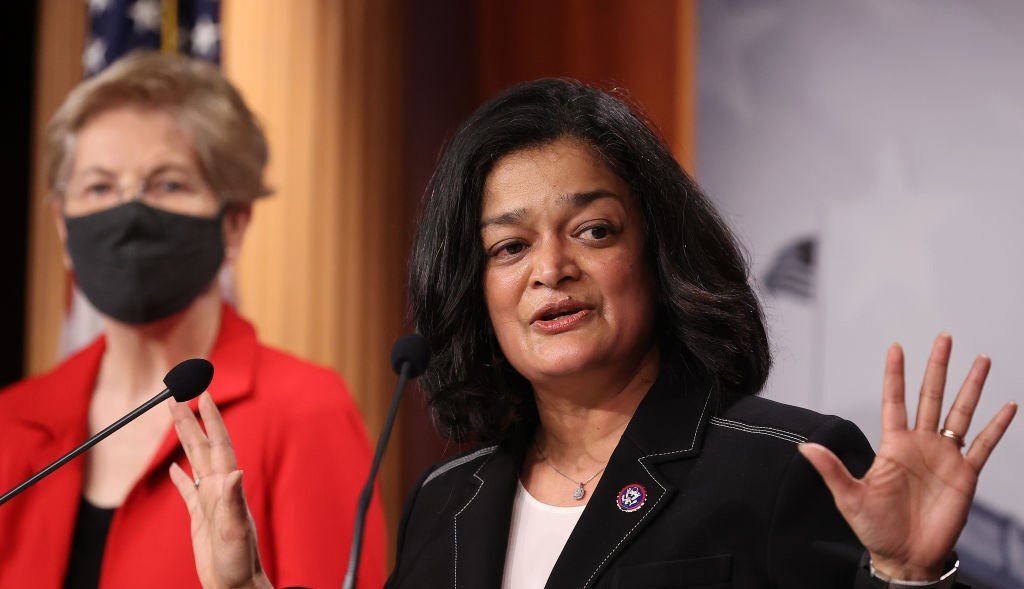 Indian American Rep. Pramila Jayapal speaks during a March 1 news conference with Sen. Elizabeth Warren (left) to announce legislation that would tax the net worth of America’s wealthiest individuals. Citing growing inequalities during the coronavirus pandemic, Jayapal, Warren and Rep. Brendan Boyle introduced the bill that would apply a two percent tax on people worth more than $50 million and an additional one-percent surcharge for net worth above $1 billion. (Chip Somodevilla/Getty Images)

Jayapal said the COVID-19 pandemic has exacerbated structural economic inequalities. “As working families struggle to put food on the table, keep the heat on, and pay the rent during this devastating economic crisis that has caused the poverty rate to jump by the largest amount in at least 60 years, the rich have only gotten richer and the wealth of billionaires has jumped by 40 percent,” she said in a press statement.

The members of Congress announced their bill days after a minimum wage hike to $15 an hour was left out of the $1.9 trillion COVID relief bill, which was passed for a second time by the House on March 10, and was signed by President Joe Biden Mar. 11. Supporters of the wage hike noted that millions of people, many with families, eke out a living on $7.25 per hour: some hold two or even three jobs to stay afloat.

“The Ultra-Millionaire Tax Act will help level the playing field, narrow the racial wealth gap, ensure the wealthiest finally begin to pay their fair share, and invest trillions of dollars into our communities so we can make a real difference in the lives of people across America,” said Jayapal, the first Indian American woman in the House.

Billionaires currently have a tax rate much lower than the middle class. “The ultra-rich and powerful have rigged the rules in their favor so much that the top 0.1 percent pay a lower effective tax rate than the bottom 99 percent. Billionaire wealth is 40 percent higher than before the COVID crisis began,” said Warren in a press statement announcing the bill.

“As Congress develops additional plans to help our economy, the wealth tax should be at the top of the list to help pay for these plans because of the huge amounts of revenue it would generate. This is money that should be invested in child care and early education, K-12, infrastructure, all of which are priorities of President Biden and Democrats in Congress,” she said.

“The hyper concentration of wealth among a tiny number of multimillionaires and billionaires is a crisis for American capitalism and the American Dream,” said Boyle.

Two French economists — Gabriel Zucman and Emmanuel Saez — from the University of California, Berkeley, are the driving forces behind Congressional proposals for a wealth tax, according to The New York Times, which profiled the two researchers in a story Feb. 21, 2020, when Warren and Vermont Senator Bernie Sanders were still in the race to capture the Democratic ticket to the White House.

“Wealth at the top has boomed during the COVID crisis. Billionaires’ wealth has literally exploded while many Americans struggle with job and income loss,” wrote Zucman and Saez in a statement released by Jayapal.

“The ultra-millionaire wealth tax is the most direct and powerful tool to curb growing wealth concentration in the U.S. and make sure the ultra-wealthy pay their fair share in taxes. It will also bring substantial and much needed tax revenue to address the many challenges the country is facing,” wrote the economists.

John Cochrane, an adjunct scholar at the Cato Institute, disagreed, saying a wealth tax is a very inefficient way for the government to raise money. “A substantial wealth tax would be a neon sign to the wealthy: Don’t save your wealth, consume it now! Take a private jet on around‐the‐world tour! Also, a substantial wealth tax screams: don’t get wealthy in the first place by working hard or starting a business because the government will just take it away from you,” he wrote.

“A great lie is that the rich pay lower taxes,” Cochrane stated.

Jayapal, Warren and Boyle’s proposal include anti-evasion measures, such as increased audits of those subject to the tax; a 40 percent “exit tax” on people with a net worth of above $50 million who leave the country to avoid paying taxes; and a revamping of the IRS, with new tools to identify hard to value assets.