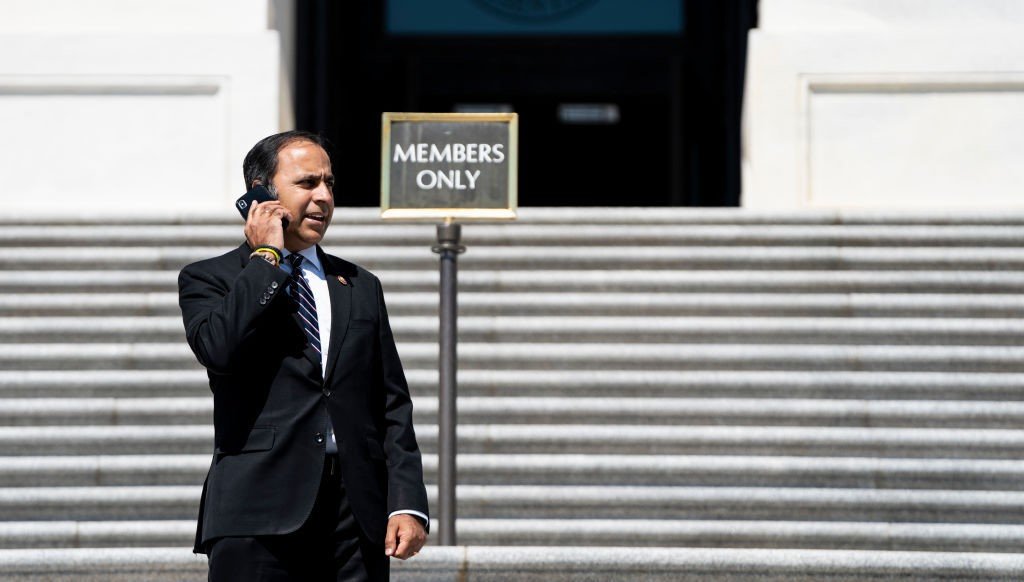 Indian American Rep. Raja Krishnamoorthi, in a proposed letter to be sent to the Democratic leadership, said: “The American economy is unable to access the full international talent pool of high-skilled workers already present and working in the United States today…because there is effectively a green card ban on high-skilled immigrants from India, China, and other countries with large populations of workers eager to remain in America and power.” The congressman is seen on the steps of the House on Capitol Hill in Washington, D.C. May 14, 2021. (Bill Clark/CQ-Roll Call, Inc via Getty Images)

Indian American Congressman Raja Krishnamoorthi (D-IL) Aug. 23 called on his congressional colleagues to join him in sending a letter to House Speaker Nancy Pelosi and Senate Majority Leader Chuck Schumer on the need to address the employment-based green card backlog as part of budget reconciliation.

Any package that addresses longstanding immigration priorities must include relief for the approximately 1.2 million individuals unable to receive a green card primarily due to country-based discrimination, the congressman said in a statement.

“I am pleased that tackling our broken immigration system is part of the budget reconciliation discussion,” said Krishnamoorthi. “However, it is imperative any immigration package include provisions to address the employment-based green card backlog, which is damaging American competitiveness and abandoning 1.2 million people to perpetual nonimmigrant status. I call on my colleagues to immediately raise this important issue with leadership and ensure that relief for backlogged high-skilled workers is included in the final package. Our economic recovery from COVID-19 depends on it.”

The letter, which will be sent in a week, is co-signed by Reps. Kathy Manning (D-NC) and Deborah Ross (D-NC).

Krishnamoorthi stated in the letter that “The American economy is unable to access the full international talent pool of high-skilled workers already present and working in the United States today – the very scientists, inventors, health care workers, entrepreneurs, and other professionals that give the United States its edge over its global competitors today. This is because there is effectively a green card ban on high-skilled immigrants from India, China, and other countries with large populations of workers eager to remain in America and power forward our economy and social safety net programs for generations to come. Right now, no more than 7% of employment-based green cards are available to individuals from a single country, which has created a decades-long backlog for would-be immigrants from India and China.”

The congressman noted that “Indian nationals face a particularly daunting backlog of 80 years, and an anticipated 200,000 will die before achieving lawful permanent resident status,” adding that “this is keeping some of the world’s most talented individuals from permanently calling America home, encouraging them to take their inventions, expertise, and creativity to other countries instead.”

“Most workers in the employment-based green card backlog are already in the United States on temporary nonimmigrant visas,” he noted, “such as the H-1B visa for workers in specialty occupations, that are renewable but greatly restrict beneficiaries from reaching their full potential. H-1B holders are unable to change jobs or start their own businesses – despite the fact that they have been shown to boost overall productivity, wages, and new patents. The temporary nature of the H-1B visa forces beneficiaries to live in a constant state of uncertainty, preventing them from becoming entrepreneurs, buying homes, employing more Americans, or otherwise fully establishing themselves as permanent fixtures within the American economy.”

The letter continued: “An especially painful aspect of the H-1B experience is that dependent children, known as ‘Documented Dreamers,’ are often forced to self-deport to their country of birth if they reach age 21 before their parent obtains a green card, despite having lived most of their lives in the United States.”

“Failure to provide a path to lawful permanent residence for the 1.2 million people in the employment based green card backlog, most of whom are H-1B visa holders, would be tantamount to staging an economic recovery with one hand tied behind our back,” the letter states. Krishnamoorthi’s letter adds: “For over a decade, there has been strong bipartisan support for helping individuals stuck in the green card backlog, as recently demonstrated by the resounding 365-65 vote to pass the Fairness for High Skilled Immigrants Act (H.R. 1044/S.386) in the House last Congress. Every comprehensive immigration reform effort over the past 20 years – as well as President Biden’s immigration bill – has included the concept of clearing the green card backlog. Failure to address the backlog, while taking the opportunity of reconciliation to pass other immigration priorities, would be a tragic oversight with lasting repercussions for impacted individuals and the American economy at large.”