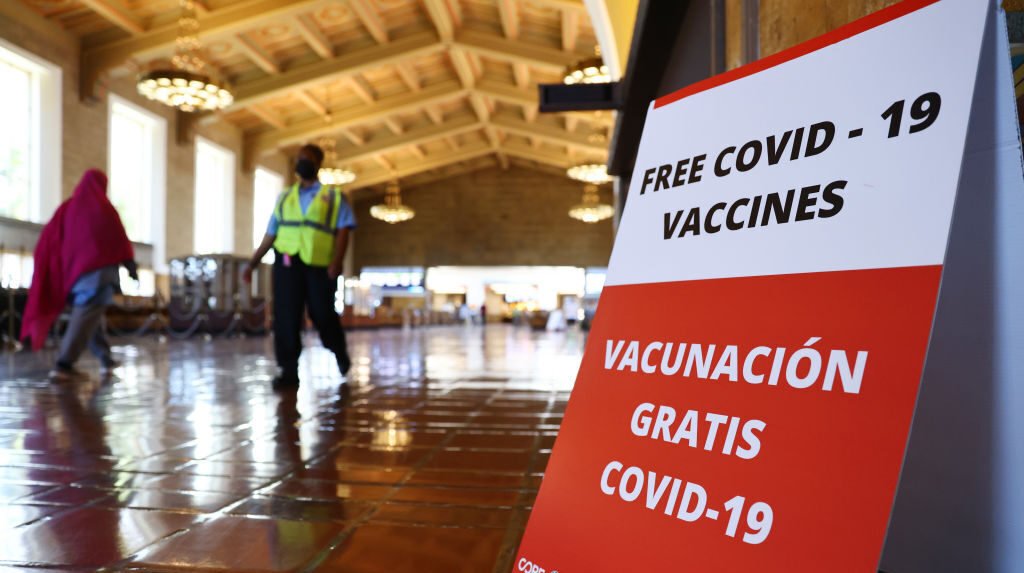 A sign advertises a free vaccination site set up inside Union Station in an effort to target commuters, on June 10, 2021 in Los Angeles, California. Indian American U.S. Representatives Raja Krishnamoorthi and Pramila Jayapal were among lawmakers introducing the NOVID Act. (Mario Tama/Getty Images)

Indian American Congressman Krishnamoorthi last month announced he would be launching the legislation of the NOVID Act to provide funding for vaccinating 60 percent of the population from middle-income countries against COVID-19 (see India-West article here: https://bit.ly/3zjvWoN).

Even as global COVID-19 infection and fatality rates decline, more than 300,000 new people test positive each day. In a recent survey by Oxfam, 88 percent of epidemiologists believed that persistent low vaccine coverage in many countries would make it more likely for vaccine-resistant mutations to emerge from the ongoing caseload, and 66 percent said that within a year the virus would mutate to the extent that the majority of first-generation vaccines would become ineffective, according to the June 8 news release issued by Krishnamoorthi’s office.

Following in the footsteps of the Lend-Lease Act in the Second World War, the NOVID Act would immediately help save lives in those nations still hardest-hit by the virus by reducing the potential emergence of dangerous new strains through helping to inoculate at least 60 percent of the populations of the 92 low- and middle-income countries eligible to receive COVID-19 vaccines through the COVID-19 Vaccines Global Access, the release said.

The NOVID Act would establish the Pandemic Preparedness and Response Program to immediately coordinate U.S. efforts and investments in increasing the production, procurement, and end-to-end distribution of vaccines in COVAX nations to end the pandemic and reduce the threat of new variants to the United States and the world.

PanPReP would be modeled after the President’s Emergency Plan For AIDS Relief, which has helped save 20 million lives since 2003, according to the release.

“Despite the progress we’ve made here at home, the coronavirus continues to devastate other parts of the world, and these outbreaks represent a threat to Americans with an increased risk of double and triple mutation variants which the vaccines we have today may not be able to stop,” Krishnamoorthi said in a statement. “That’s why I’m proud to join with my colleagues in introducing this legislation to protect our country from new variants by helping our partners abroad vaccinate their populations, end their outbreaks, and prevent new variants from emerging within their borders or reaching ours.

“So long as COVID-19 continues to thrive anywhere, it’s a threat to everyone everywhere, and that means we need the global response the NOVID Act would provide,” he added.

“A global pandemic is not over until it is over everywhere,” added Jayapal. “It is not only our moral responsibility to quickly and equitably unleash the resources necessary to defeat this deadly virus abroad, but doing so will also keep us safe at home while reducing the risk of dangerous new variants.”

The NOVID Act would establish the Pandemic Preparedness and Response Program (PanPReP), which will have oversight and responsibility for the U.S. Government global health response to the COVID-19 pandemic.

The program would also be responsible for coordinating the U.S. Government response with international non-governmental organizations, development banks and civil society as well as foreign governments.

IMPACT applauded the introduction of the NOVID Act.

“The United States can and must be a global leader in the fight against COVID, that means fighting for global vaccine equity,” Neil Makhija, executive director of IMPACT, said in a statement. “COVID-19 anywhere is a threat to citizens everywhere. Ending the pandemic should be a nonpartisan goal and Congress needs to quickly pass the NOVID Act,” Makhija added.