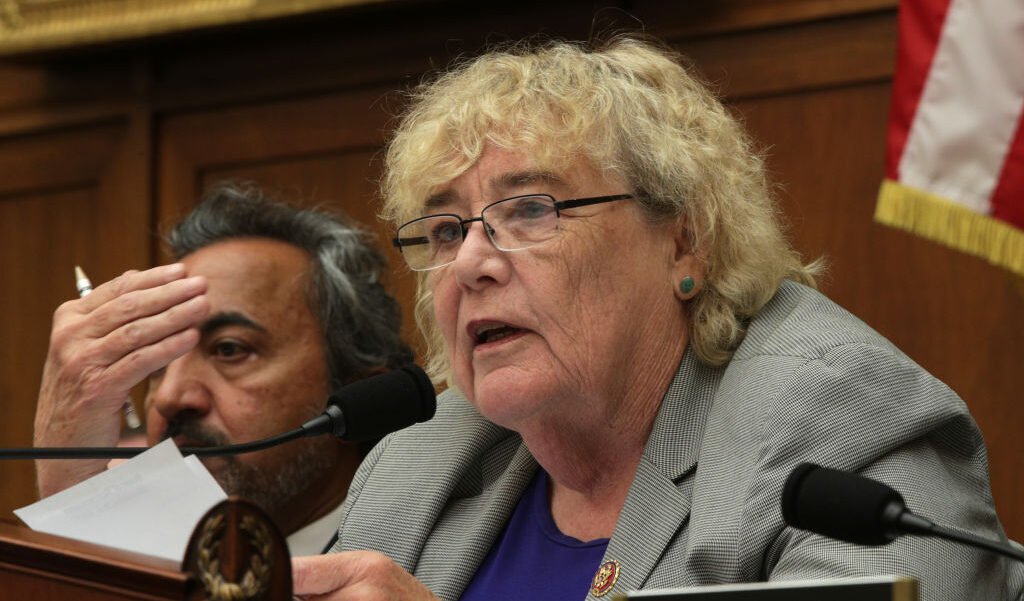 Reps. Zoe Lofgren (above right), who represents portions of the San Francisco Bay Area’s Silicon Valley, home to a large population of Indian Americans, and John Curtis have introduced the Equal Access to Green Cards for Legal Employment (EAGLE) Act of 2021, which aims to phase out the per-country caps that have left thousands of H-1B workers from India stranded in a decades-long green cards queue. Physician Raj Karnatak, who has served on the front lines in the U.S. during the Covid-19 pandemic, urged Congress to quickly get the measure passed. “End the misery of decades of brutal green card backlog. Frontline healthcare workers in the backlog are working in the hardest-hit underserved areas, risking their lives every day. They don’t deserve the inhumane backlog in return,” he tweeted. (Alex Wong/Getty Images)

Reps. Zoe Lofgren, D-California, and John Curtis, R-Utah, on June 2 introduced the Equal Access to Green Cards for Legal Employment (EAGLE) Act of 2021, which aims to phase out the per-country caps that have left thousands of H-1B workers from India stranded in a decades-long green cards queue.

The bill, H.R. 3648, would eliminate the per-country cap over a period of nine years. Critically, it would also raise the family-based green card per country cap from 7 percent to 15 percent.

“We all know that our immigration system is severely broken, and it has been broken for decades,” said Lofgren, chair of the House Subcommittee on Immigration and Citizenship, in a statement announcing the bill. She noted that the framework of green card allocation has not been updated since 1990.

Under current immigration law, H-1B visa holders — overwhelmingly from India — are eligible to apply for a green card six years after they have worked in the U.S. But per country caps only allot a maximum of 7 percent of the 140,000 available employment-based green cards to countries per year. Thus, Indian nationals can only receive 9,800 green cards each year.

Their H-4 dependent spouses and children are also in limbo: children age out of their dependent status once they turn 18; they must then attempt to port their immigration status to an F-1 international student visa, or an employment-based visa. Barring that, they must return to the home country, even if they have lived in the U.S. for most of their lives.

Currently, more than 1.3 million Indian nationals with approved green card petitions are stuck in a queue that can last as long as 83 years by some estimates.

Thousands of employment-based green cards go wasted each year, as they are reserved for countries with little to no demand.

Additionally, from years 1 through 7, 4,400 green cards would be reserved for those who work in “shortage occupations,” such as nurses and physical therapists.

Infectious disease and critical care physician Raj Karnatak, who worked on the health care frontlines in Milwaukee, Wisconsin, during the Covid-19 pandemic, told India-West in April, that — given current estimates — he would be stuck in green card limbo for 195 years.

Karnatak urged Congress to quickly pass the EAGLE Act. “End the misery of decades of brutal green card backlog. Frontline healthcare workers in the backlog are working in the hardest-hit underserved areas, risking their lives every day. They don’t deserve the inhumane backlog in return,” he tweeted.

“Limitations have led to backlogs that were unimaginable in 1990,” said Lofgren. “The effect has been that countries with relatively small populations are allocated the same number of visas as a relatively large-population country.”

“The result? A person from a large-population country with extraordinary qualifications who could contribute greatly to our economy and create jobs waits behind a person with lesser qualifications from a smaller country. It makes no sense,” said the congresswoman, who represents portions of the San Francisco Bay Area’s Silicon Valley, which has a large population of Indian Americans.

Lofgren noted that per-country caps hurt the U.S. economy. “We are now seeing recruiters from outside America luring those with the highest skills away from the U.S.,” she said.

Indeed, Pranav Singh, a critical care physician in Mason City, Iowa, who has been waiting for his green card since 2012, told India-West in April that he and his family are making plans to move to Canada, which, he said, will offer them permanent residency relatively quickly.

Curtis, in a press statement, noted that Utah is the fastest-growing state in the nation, in large part because of the major growth and innovation in the technology sector, which brings thousands of new jobs to the state. Utah also has one of the nation’s lowest levels of unemployment. “Many companies rely on foreign workers, and navigate our complicated immigration system when there is a shortage of Americans seeking these positions,” he said.

“The bipartisan EAGLE Act will create a more fair employment-based visa system by eliminating per-country limitations and creating a first-come, first-served system focused on merit instead of country of origin, making it easier for Utah’s businesses to expand and compete globally,” said Curtis.