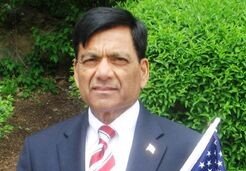 A top Republican leader in Yorktown, New York, has stepped down from his post as video footage emerged of him shouting racist slurs on election night Nov. 2 at former councilman Vishnu Patel.

Patel has served on the council for almost 12 years and was running for his fourth term. But the Indian American candidate failed to win re-election amid a Republican sweep.

“Vishnu’s gone. Gone. Gone. That mother****r. That fu****g sand n****r,” said a voice on the video that was initially posted to the Yorktown Republican Party’s Facebook page, but has since been deleted.

Kevin Byrnes, the chair of the Yorktown Republican Town Committee, took the video down five days later after he was made aware of the slur by the Yorktown News. The person making the racist remarks was later discovered to be Tom Pomposello, a Republican Party district leader who has since resigned his post.

Pomposello did not return India-West’s calls left at his home number. He told the Yorktown News: “I want to apologize. It was disgusting. It was something I don’t remember saying. I watched it and listened to it and said, ‘Oh, my God. It’s me’.”

“I’m embarrassed for my family. I am horrified by this, I plan on apologizing to Vishnu in person, to both the Republican and Democratic parties, and to the people of Yorktown,” said Pomposello, adding that he had been drinking that night.

The Yorktown Republican Party has cut its ties to Pomposello. Several party leaders wrote to him, stating: “Your conduct has become a stain on our community.” He was also stripped of his role in organizing an annual fundraiser, the San Gennaro Feast.

Patel first ran for office in 2009, after retiring from a 36-year career at IBM. He told India-West that he and his family are “proud Americans.”

Patel characterized himself as “the only brown guy on the City Council,” and the first non-white person to serve in that role in Yorktown, a small town with about 36,000 residents, 90 percent of whom are white.

He said he was not surprised by Pomposello’s outburst on election night, given the divisive political rhetoric of the previous four years.

“Donald Trump gave permission for the worst element to say and do things they would have never dared to do otherwise,” Patel stated. “No one attempted to stop Tom,” he added.

In the days since, Patel said he has received “hundreds” of supportive letters, texts, and emails from local Republicans and Democrats. “I’m hoping that a new generation of Yorktown Republicans will shape a different future.”

Patel said he did not plan to take action against Pomposello. “I have faced discrimination on the campaign trail before,” he said. “But my good name will shine on forever.”

Patel is Town Board Liaison for the Community Housing Board; the Energy Advisory Committee; the Senior Citizens Advisory Committee; Tree Conservation Advisory Commission; and the Utilities Oversight Committee. While at IBM, he received several awards for his scientific discoveries. He and his wife Dipika immigrated to the U.S. in 1969.