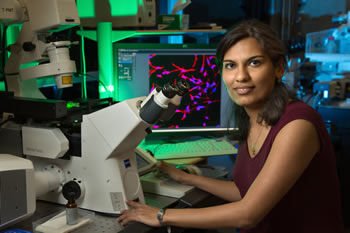 A postdoctoral researcher at the Salk Institute, Swati Tyagi was killed by motorist while she was riding her bike in La Jolla, California. (salk.edu photo)

Swati Tyagi, an Indian American postdoctoral researcher at the Salk Institute’s Hetzer Lab, was identified by the institute as the bicyclist killed after being struck by a car on June 23 in La Jolla, California.

Salk said Tyagi was killed when a person in a car struck her from behind while she was riding her bike. It offered its deepest condolences to her family, friends and coworkers.

“The shock and pain from Swati’s sudden passing is raw and deep. We are struggling to process this heartbreaking news,” Martin Hetzer said in a statement. “Swati was a rising star with immense intelligence, noble modesty and boundless generosity.”

The La Jolla Light said, citing San Diego Police, that the 34-year-old Tyagi was riding south on North Torrey Pines Road approaching La Jolla Village Drive when she was hit at about 4:20 p.m.

Investigators said Tyagi had been riding in the right lane when she merged into the left lane and was struck from behind by a 2005 Mercedes-Benz SL500 driven by a 74-year-old man. Tyagi died at the scene, the report said.

Tyagi was “a very humble person who was very friendly” and helped “everyone she could,” her brother-in-law told the publication in a Whatsapp message from India.

He added in the report that Tyagi studied at the Tata Institute of Fundamental Research in Mumbai and earned her doctorate in 2014 in Germany.

The San Diego Police Department’s Traffic Division is handling the investigation of the deadly crash. Investigators do not suspect impaired driving was a factor, the Light added.

An accomplished scientist who joined Salk in 2016 as a research associate, Tyagi received numerous recognitions for her outstanding work and was a recipient of the 2017 Salk Women & Science Special Award, the institute said in a news release.

Her most recent paper, “High-precision mapping of nuclear pore-chromatin interactions reveals new principles of genome organization at the nuclear envelope,” was shared with the scientific community in May 2021.

“Her love and talent for science inspired us all,” added Hetzer. “We are now called on to retain and safeguard her legacy—for her young son, her husband and family, and the scientific community.”

Swati is survived by her husband, Ashim Rai, a scientist at Scripps Research in La Jolla, and her 11-month-old son, Miransh.

A GoFundMe page (seen here: https://bit.ly/3dTe3o1) was created to provide individuals with a way to help Swati’s family with a financial gift of support to help with their immediate needs.

All donations go directly to Tyagi’s grieving husband. At time of press, the fundraiser, which was seeking to reach a goal of $10,000, had raised nearly $65,000.