HomeEntertainmentCinemaSanjay Dutt Used to Cry Like a Baby, Police Feared For his Safety

Sanjay Dutt Used to Cry Like a Baby, Police Feared For his Safety 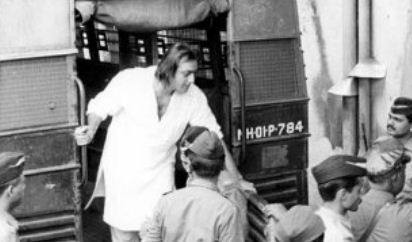 Sanjay Dutt Used to Cry Like a Baby, Police Feared For his Safety

NEW DELHI, (IANS) – Tasked with getting to the bottom of the 1993 Mumbai serial bomb blasts that claimed 257 lives and injured more than 1,400 people, Rakesh Maria, with just 12 years in the IPS and two years in the city as Deputy Commissioner of Police, cracked the case in less than 12 hours, thanks to a few lucky breaks.

One of the biggest surprises was the involvement of the rising Bollywood star Sanjay Dutt, who had hidden in his bungalow some of the weapons smuggled in along with the explosives that caused the mayhem.

“The discovery of Sanjay Dutt’s involvement in the blast conspiracy was a real shocker and a revelation,” Maria, who later rose to be the Mumbai Police Commissioner, writes in his autobiography, “Let Me Say It Now”.

“Yes, sir, quite sure. And I have the entire chain but Dutt,” Maria replied.

This was on the morning of March 15, 1993, three days after the blasts and Dutt at that time was in Mauritius shooting a movie ironically titled “Aatish”(Conflagration).

It had emerged during the investigations that on January 16, 1993, Dawood Ibrahim’s brother Anees had directed two of his henchmen, Hanif, and Samir, to take an arms-laden van to Dutt’s bungalow in Bandra.

The actor kept three AK-56 rifles, 25 hand grenades, one 9mm pistol and some cartridges for himself, put them in a duffle bag, and carried them inside the house.

“Lying in his house, in his bedroom, I think. If I go, I will be able to recover it,” Maria responded.

“If we act before his return, he will get alerted and may abscond. The moment he is back, we shall pick him up. Let’s maintain secrecy. No one should know. Do you know when he is coming back?” Samra said when informed.

The very next day, however, an English tabloid screamed: “Sanjay has an AK-56.”

A few days later, Dutt called up Samra to inform him he was returning to India, and it fell on Maria to arrest him at the airport.

The flight arrived on April 19, 1993, around 2 am. Dutt, a first-class passenger, was the first to disembark.

“He looked at me dazed and in a state of shock and meekly handed over his passport and boarding pass without a word,” Maria writes. Dutt was taken straight to the Crime Branch in the CP’s office at Crawford Market.

“He was taken to a room with an attached toilet that I had identified earlier in the day,” Maria writes. “It was manned by carefully selected handpicked guards. Nobody except me was to speak to him; nobody was allowed to enter the room without my permission. If he was to use the toilet, he was to keep its door ajar. Smoking too was prohibited,” he added.

M.N. Singh had instructed him that he would come to his office at 9.30 a.m. and Dutt was to be produced before him.

Maria continues: “At 8 pm sharp, I went to the room housing Sanjay Dutt with handpicked officers. Nobody had uttered a word to him or responded to his queries through the night. Bereft of family support and with not a soul to extend him any sympathy, Sanjay Dutt looked completely forlorn and broken. Had I allowed him to meet his family, he would have been another man altogether.”

Maria started by asking Dutt: “Will you tell me the truth, or do you want me to tell you your story?”

“Sir, maine kuchh nahin kiya!” He was sitting on a chair, looking at me with soulful eyes and whining.

Looking back on that day, Maria writes: “The tension and stress of the last few days caught up with me. I could not bear the lie and couldn’t help but plant a tight slap on his cheek. He tilted backwards, his legs going up in mid-air and I swiftly held him by his mane of long, gold-tilted hair. Looking literally down upon him into his horrified and scared eyes, I said, ‘I am asking you like a gentleman, you answer like one’.

“Sir, can I talk to you in private, he asked in a quavering voice, looking up at me in a frozen stare, broken and shaken. This was much shorter and quicker than I had expected! I sent the officers out and, then Sanjay Dutt told me everything, crying like a child. He corroborated all that Hanif, Samir and the others had said.

“So, the weapons are in your house,” I asked him. “Come and show me where they are.”

“He fell sobbing at my feet and said, ‘Sir, I have destroyed them. Then he cataloged in detail how, after the news report had appeared in ‘The Daily’, he had tasked his friends to go to his house, take out the weapons and destroy them. I immediately sent teams to pick up his friends Yusuf Nullwala, Ajay Marwah, Kersi Adjania and Rusi Mulla, who had aided and abetted Sanjay in destroying the weapons,

“After he had finished, he fervently pleaded: “Please don’t tell my father.”

“I cannot hide anything. I must tell the truth. It’s time you stood up to face the consequences of the mistakes you have made. Grow up and own up! Tell your father what you have done,” Maria told him as Dutt kept pleading that his father is not told.

By then, M.N. Singh had arrived. Dutt was produced and told to speak for himself. He reiterated the entire sequence of events. M.N. Singh was satisfied and relieved that we had not been led up the garden path.

That afternoon, Dutt was produced before the court which remanded him to police custody.

Later that evening, Sunil Dutt, accompanied by Rajendra Kumar, Mahesh Bhatt, Yash Johar and Baldev Khosa, came to see Maria. “I did not know any of them, despite my Bollywood lineage,” Maria writes.

Even as the elder Dutt continued to protest his son’s innocence, Sanjay was called in.

“No sooner he entered he saw his father and immediately burst into tears. He touched his father’s feet and said, ‘Sorry! Please forgive me. Mere se galti ho gayi.’ I have made a mistake, he confessed. He then proceeded to narrate his follies,” Maria writes.

He continues: “Sunil Dutt was stunned with this admission of guilt. During this entire engagement, my eyes were transfixed on Sunil Dutt. The expression on his face is hard to describe.

“The blood just drained from his face. It was as if the impact of the confession had knocked every wisp of air from his lungs. The incredulity of what he had just heard rendered him speechless and totally stunned. The magnitude and gravity of Sanjay’s actions shook the foundations of his belief and confidence. He was a broken man — his reputation, stature and standing punctured and deflated.”

During the period Dutt was in police custody, “he was an emotional wreck,” writes Maria. “I had instructed the guards to be watchful that he did not harm himself. He would keep asking the guards to let him speak to me. Whenever I got the time, I would ask him to be brought to me.”

Maria continues: “My hectic and overloaded work schedule had left me with no time to listen to his outpourings about his trials and tribulations.

“However, given his emotional state of mind, I did not want him to cause himself bodily harm. Imagine the hue and cry raised about police brutality and their usage of third-degree on an ‘innocent’ film hero if that happened. So, I would ask him to be brought to me late in the night after all my important work was done.

“Then it would all be about his troubled past, addictions, attachment to his mother, how her death had affected him and how he used to miss her, and his affairs of the heart! He would cry incessantly and I would console and advise him to have courage, learn from his mistakes, face life and the consequences of his actions.”

Some of the things Sanjay Dutt narrated to Maria gave him an understanding of the Bollywood-underworld nexus, “especially the inroads that the organized crime syndicates had made into the tinsel world.” On completion of his police custody remand, Dutt was transferred to judicial custody in the Arthur Road Jail and, as Maria puts it, “I heaved a sigh of relief”.