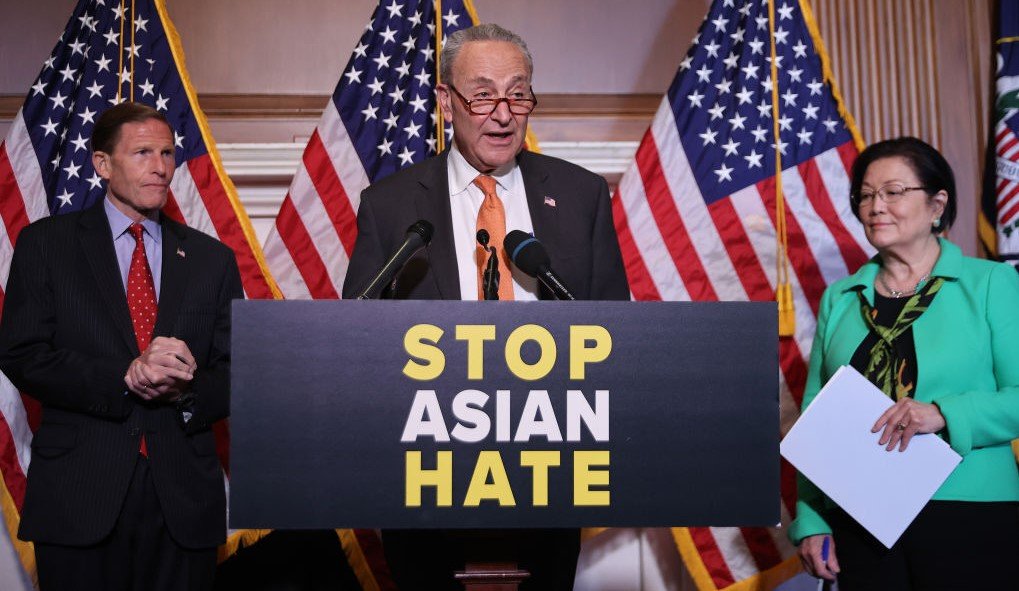 Senate Majority Leader Charles Schumer (D-NY) (center) speaks during a news conference with Sen. Richard Blumenthal (D-CT) (left) and Sen. Mazie Hirono (D-HI) following the passage of the COVID-19 Hate Crimes Act at the U.S. Capitol on April 22, 2021 in Washington, DC. The COVID-19 Hate Crimes Act addresses the rise of hate crimes and violence targeted at Asian Americans and Pacific Islanders through funding that coordinates efforts between local, state and federal law enforcement to respond to hate crimes. Varun Nikore, Indian American executive director of the AAPI Victory Alliance, said: “In light of the surge in anti-Asian hate in this country, the COVID-19 Hate Crime Act gives the Asian American and Pacific Islander community a light at the end of the tunnel.” (Chip Somodevilla/Getty Images)

The U.S. Senate April 22 overwhelmingly passed a bill that would help combat the rise of hate crimes against Asian Americans and Pacific Islanders, a bipartisan denunciation of such violence during the coronavirus pandemic, reported AP.

The measure would expedite the review of hate crimes at the Justice Department and provide support for local law enforcement in response to thousands of reported violent incidents in the past year.

Police have seen a noted uptick in such crimes, including the February death of an 84-year-old man who was pushed to the ground near his home in San Francisco, a young family that was injured in a Texas grocery store attack last year, and the killing of six Asian women in shootings last month in Atlanta.

The names of the six women killed in Georgia are listed in the bill, which passed the Senate on a 94-1 vote. Biden applauded the measure, tweeting, “Acts of hate against Asian Americans are wrong, un-American, and must stop.” The House is expected to consider similar legislation in the coming weeks.

The bill also comes on the heels of a mass shooting at a FedEx facility in Indianapolis, Indiana, which claimed the lives of four Sikh Americans (see India-West article here: https://bit.ly/3sMGw3p). The shooter was later determined to be on white supremacist websites, according to Indianapolis Metropolitan Police Department intel. The Indian American community has pleaded for a hate crime investigation of the April 15 mass shooting. “We fully expect that authorities should and will conduct a full investigation, including the possibility of bias as a factor,” said Satjeet Kaur, the Sikh Coalition’s executive director.

Hirono, the first Asian American woman elected to the Senate, said the attacks are “a predictable and foreseeable consequence” of racist and inflammatory language that has been used against Asians during the pandemic, including slurs used by former President Donald Trump.

Senate Majority Leader Chuck Schumer, D-N.Y., said the legislation shows that the chamber can work in a bipartisan fashion, and he aims to make that happen as much as possible. “That doesn’t mean we forgo our principles. It doesn’t mean we cut back on the boldness that is needed,” he said. “It means we try to work with our Republican colleagues wherever we can.”

But unlike many of the larger, more controversial policy issues Democrats hope to tackle in their new majority, efforts to combat the rising violence against Asian Americans and Pacific Islanders have almost universal backing. More than 3,000 incidents have been reported to Stop AAPI Hate, a California-based reporting center for such crimes, and its partner advocacy groups since mid-March 2020.

Republicans said last week that they agreed with the premise of the legislation and signaled they were willing to back it with minor changes. Hirono worked closely with Sen. Susan Collins, R-Maine, to incorporate some additional Republican and bipartisan provisions, including better reporting of hate crimes nationally and grant money for states to set up hate crime hotlines.

The revised bill would also replace language in the original legislation that called for “guidance describing best practices to mitigate racially discriminatory language in describing the COVID–19 pandemic.” The legislation would instead require the government to issue guidance aimed at “raising awareness of hate crimes during the pandemic” to address some GOP concerns about policing speech.

Republicans agreed to back the compromise bill after the Senate also voted on and rejected a series of GOP amendments, including efforts to prevent discrimination against Asian Americans in college admissions and reporting about restrictions on religious exercise during the pandemic.

Following the passage of the anti-AAPI hate crime bill, many organizations throughout the Indian American and AAPI communities applauded the bipartisan effort.

Among those included in the blitz of celebration of the bill’s passage was IMPACT, the Asian & Pacific Islander American Health Forum, the National Asian Pacific American Bar Association and the AAPI Victory Alliance.

“In the past year alone, there have been more than 3,800 reported anti-Asian hate crimes, but those numbers are dramatic underestimates for the accurate national figures we need to make policy,” said Neil Makhija, executive director of IMPACT. “All Americans need to understand the experience of Asian Americans. The fact that this is one of the only bills to receive bipartisan support in our current Congress highlights the magnitude of the crisis that AAPI communities are experiencing and the urgency of working together to tackle racism and hate.”

With the passage of this bill, Makhija said the community can begin to restore its faith in government and move one step closer to fighting racism against Asian Americans.

“The passage of the COVID-19 Hate Crimes Act is a testament to the monumental organizing by our Asian American, Native Hawaiian and Pacific Islander communities and allies against hate. We thank Sens. Mazie Hirono and Tammy Duckworth, and Rep. Grace Meng for championing this effort in Congress,” Forum president and chief executive Juliet K. Choi said in a statement.

“NAPABA congratulates the Senate for passing this important legislation, and Senator Hirono for her leadership on this issue,” said NAPABA president A.B. Cruz III.

“This bill squarely addresses one of the root causes of the increase in hate crimes and bias-motivated incidents being committed against the Asian American community – the dangerous rhetoric and falsehood that somehow Asian Americans are responsible for the COVID-pandemic. NAPABA is committed to ensuring justice for hate crimes and hate-motivated incidents committed against the Asian American community, and looks forward to swift passage in the House and enactment into the law,” Cruz said.

NAPABA believes this bill will help state and local law enforcement to better investigate and record hate crimes and hate incidents and prosecute them where appropriate.

Added the AAPI Victory Alliance and executive director Varun Nikore: “In light of the surge in anti-Asian hate in this country, the COVID-19 Hate Crime Act gives the Asian American and Pacific Islander community a light at the end of the tunnel. This legislation represents a first step in the right direction as we work to restore trust and end Asian hate crimes. We…applaud the Senate for proceeding with this important legislation promptly and with overwhelming bi-partisan support.”

“Ending Asian hate should never be a partisan issue. Passing this bill is just the first step in a long process for AAPI’s and communities of color to have the equity and opportunities we deserve. We’ve come so far but still have so much more work to do,” the alliance and Nikore added.