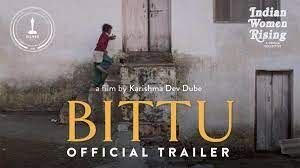 “Bittu” was one of the prize-winning films at the Indian Film Festival Los Angeles. (screen grab of YouTube trailer of the film)

Running virtually from May 20-27, Variety reported that the 19th edition of the festival showed 40 films to audiences in India, for the first time, as well as California, after being absent due to the pandemic lockdown last year. The films were in 17 languages and included 16 women directors.

Calling “Seththumaan” “a film that impressed us tremendously, both in terms of filmmaking and dramaturgy,” the jury appreciated the movie and said, “It’s a phenomenal first feature, gentle and impactful, done with heart and guts, that is at the same time very candid and very mature and complex.”

Honorable mentions went to Sajin Baabu’s Malayali film “Biriyaani.” On the other hand, Karishma Dev’s Oscar-nominated film “Bittu” was also honored at the festival. The jury praised the film and said, “A spectacular film about a brilliant young girl with a foul tongue who discovers that her defiance is lifesaving.”

For the shorts category, the jury gave a shoutout to Rima Das’ “For Each Other”; Upamanyu Bhattacharyya and Kalp Sanghvi’s “Wade”; and Nivita Chaliki, star of “Forever Tonight,” reported Variety.

Audience awards were also announced for Ajitpal Singh’s feature “Fire in the Mountains” and Aarti Neharsh’s short “The Song We Sang.”