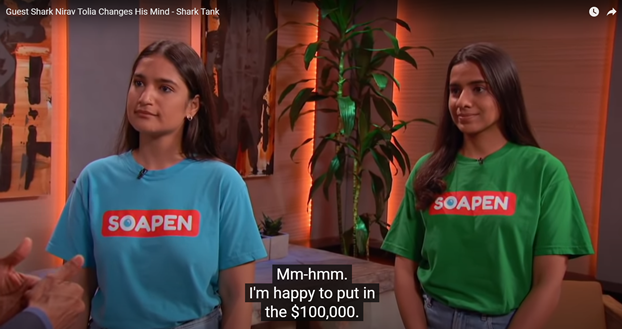 SoaPen is an interesting and fun way to keep children’s hands clean. The company’s mission is to make hand washing fun and accessible to kids globally.

Shubham Issar and Amanat Anand were able to secure funding for their business from Tolia on the Oct. 29 episode but not without a hiccup. The two were hoping to clinch a $100,000 deal for 10 percent equity in their company.

While SoaPen seemed appealing to all the sharks, no one, including Tolia, rallied behind it as they believed the company was still in the nascent stages. However, after a little introspection, Tolia decided he was going to invest in SoaPen after all.

After the two leave the tank without an offer from the Sharks for their kid’s soap product, Tolia tells Mark Cuban he thinks he may have made a mistake. He chases them down the hallway and proposes a deal.

“I’m sorry to interrupt. Let me run something by you,” he says before adding that he and his wife, Megha Tolia, might be able to help them.

He admitted to the stunned entrepreneurs that even though he saw great potential in them it was still “very early. And there are lots of things that need to happen.”

So this was his offer: “I’m happy to put in the $100,000. I would like to have 10 percent of the company. However, for safety, what I would like to propose is a $1 royalty that pays back $1 per unit sold until I reach $200,000, at which point, the royalty goes away. You have nothing else that you owe me besides the original 10 percent.”

“I want to see you succeed,” he said.

SoaPen is non-irritating, non-toxic and free from SLS, parabens, EDTA, phthalates and any animal by-product.

Anand and Issar grew up in India but met at Parsons School of Design, New York.

The two aimed to design for social change and enrolled in the UNICEF Wearables for Good Challenge. It highlighted statistics that showed that more than 50 percent of diseases that caused fatalities among children under the age of five can be avoided by the usage of hand soap.

Anand and Issar were moved by this and started exploring ways to make hand washing fun.

The duo won the UNICEF challenge and SoaPen became a reality. They are listed on Forbes 30U30 and named Toyota’s Mother of Invention, the company notes. (Read earlier India-West story here: https://bit.ly/3CGA5Ve)