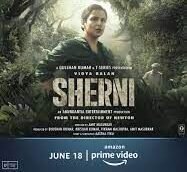 “Sherni” is in the running for India’s entry to the Oscars. (photo via IANS)

MUMBAI — The process of selecting India’s official entry for the Academy Awards is in full swing at the Bijoli cinema in Kolkata. Leading the shortlist are the Vidya Balan-starrer “Sherni” and Shoojit Sarkar’s “Sardar Udham” starring Vicky Kaushal in the titular role. Giving them competition are 14 regional language films, including the Malayalam ‘Nayattu’ and the Tamil ‘Mandela.’

Filmmaker Shaji N. Karun and a panel of 14 other judges have been given the task of zeroing down on the film that would best represent India at the world’s largest carnival of cinema — the Oscars, which will be held on March 27, 2022, at the iconic Dolby Theatre in Hollywood, California.

Both “Sherni” and “Sardar Udham” released to wide critical acclaim this year on Prime Video. ‘Sherni’, directed by Amit Masurkar of “Newton” fame, is the story of a woman forest officer who tries to bring things under control after a tigress runs amuck, leading to a human-animal conflict.

Vidya Balan’s performance in the film was widely applauded and the film was praised in particular for its realistic approach to storytelling and making use of humour at key places to drive home its message.

“Sardar Udham” is a historical biographical drama based on the life of Udham Singh, who assassinated Michael O’Dwyer, who was the Lt-Governor of Punjab when the Jallianwala Bagh massacre took place in 1919. “Sardar Udham,” directed by Shoojit Sarkar, too, has been appreciated particularly for its technical brilliance and the use of silences and moods to steer the story.