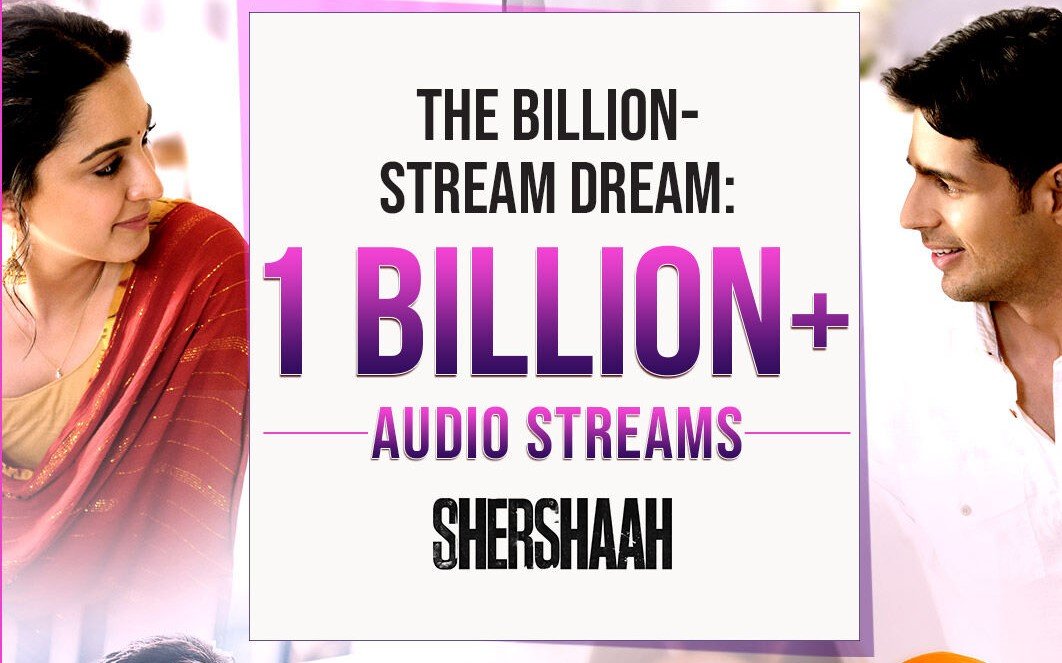 MUMBAI — “It makes me immensely happy that the songs have touched 1 billion audio streams,” exults Karan Johar. “It feels good to be on the top of the charts and have audiences groove to our tunes.”

After all, having struck the right chord with music lovers, “Shershaah”’s music album has become the fastest one to touch a record of an overwhelming 1 billion audio streams worldwide.

Among OTT releases, “Shershaah” has positioned itself in the league of successful and forever green Hindi movies. Ever since its release, the film’s soundtrack has won hearts globally, got music aficionados humming to its tunes every day and still remains the #1 album on national TV. So much so, that the album of the biographical war film, starring Sidharth Malhotra and Kiara Advani, released by Sony Music, has topped the charts for not one but two reasons – it became the biggest album of the year and the fastest one to reach 1 billion audio streams worldwide.

The album, supervised by Azeem Dayani, comprises songs by Tanishk Bagchi, Jubin Nautiyal, Asees Kaur, B. Praak, Jasleen Royal, Darshan Raval and Palak Muchhal, among others. Be it the romantic “Raataan Lambiyaan,” the soft and soothing “Raanjhaa,” which has seen countless reels being made on social media, the heart-wrenching “Mann Bharryaa 2.0,” the patriotic “Jai Hind Ki Senaa” or the male and female versions of “KabhiTumhe,” the compositions along with the lyrics have got the listeners hooked.

Incidentally, “Raataan Lambiyaan” and “Raanjhaa” have been the first Hindi film tracks to have entered the Global Top 100 on Spotify and Billboard charts.

Talking about the success of the album, Malhotra said, “The kind of response ‘Shershaah’ has received is humbling and I am elated to see the continuous affection. Being my passion project, I was deeply involved in the music selection of the film along with (director) Vishnu, Azeem and Karan. We ensured to choose songs that were right fits for every emotion and I am very happy to see the way audiences have embraced the album. I am grateful to all the artists and singers for this magical album. We are over the moon, grateful to have reached 1 billion audio streams. All thanks to the audience for their love and support.”

Delighted at the success of the album, Apoorva Mehta, CEO of Dharma Productions, added, “The success of ‘Shershaah’’s album in association with Sony Music makes all of us extremely proud and delighted. This is a very special film for all of us and to see it become one of the most loved music albums for this year is a truly extraordinary moment. Every song in the album is heart-touching and the music is awe-inspiring. We hope that the audience continues to support us and encourages us to entertain them in a much grander manner.”

“At Sony Music, we are extremely happy that this album is a top favorite among the listeners. It is overwhelming to see that the songs are being enjoyed globally, across all platforms. The numbers are a testament to the success and the appreciation by the audience. Sony Music in association with Dharma Productions is very proud and content to witness this success,” said Sanujeet Bhujabal, executive director, Sony Music Entertainment.