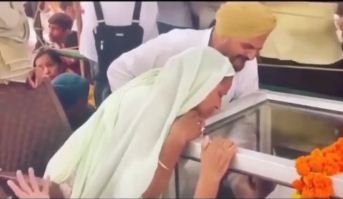 CHANDIGARH, (IANS) – Popular Punjabi singer-rapper Sidhu Moosewala’s parents hugged their son’s coffin as they bid a tearful goodbye to the slain singer on May 31.

Pictures and videos on social media showed Moosewala’s mother hugging the glass casket in which his mortal remains were kept. The mother could not stop looking at her son’s lifeless body. His father broke down and then she turned to wipe his tears.

A sea of fans and mourners gathered at the singer’s village Moosa for the cremation.

Moosewala was brutally murdered on May 29. He was in his car when the attackers blocked him and fired more than 30 shots at him.

The Delhi High Court will hear the plea filed by jailed gangster Lawrence Bishnoi, named as a suspect in the sensational murder of Sidhu Moosewala, alleging apprehension of a fake encounter by the Punjab Police for ‘political mileage’.