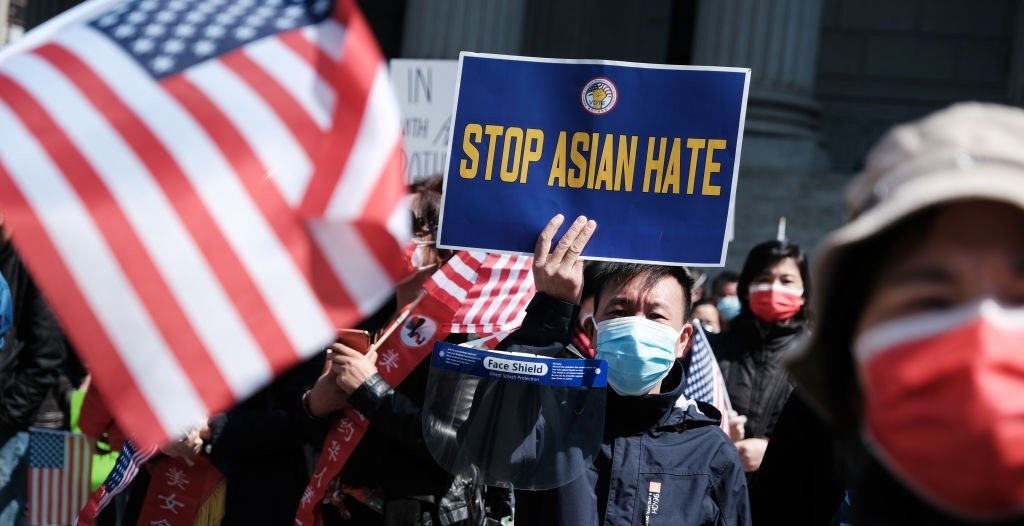 File photo of people participating in a protest to demand an end to anti-Asian violence on April 4, 2021 in New York City. Sikhs Against Asian Hate Crimes and Stop Hate Crime held a rally and a press conference May 1 to press for the April 26 attack on Sikh American Sumit Ahluwalia in New York to be probed as a hate crime. (Spencer Platt/Getty Images)

The Indian American community in New York City is coming together in support of a Sikh American man who was attacked by a suspect with a hammer in Brooklyn.

Media outlets in New York report that the community wants the April 26 attack of Sumit Ahluwalia, 32, to be investigated as a hate crime.

The attack happened at the Quality Inn on Osborn Street in Brownsville, according to reports.

The community believes the attack was motivated by hate, saying the victim was targeted because of his religious attire, specifically his turban, a CBSLocal report said.

Surveillance video shows Ahluwalia entering the lobby of the hotel, where he is operations manager. The suspect then appears to hit Ahluwalia in the head with a hammer before running off, the report said.

“He pulled out the hammer from his bucket and bang on my head with such intensity,” Ahluwalia told CBS2 in an interview.

He says the man had entered the lobby and began yelling at him and the front desk staff before spitting in his face three times, it adds.

“I said, ‘Hey brother, what happened?’ [He said,] ‘You’re not my brother. You’re not the same skin. I don’t like you,’” Ahluwalia added in the report.

Ahluwalia, when asked if he believes he was targeted, said, “I think so because I was the only turban guy who was there.”

The attack has left the father of two who immigrated from India three years ago completely shaken, according to the report.

“Now I’m feeling scared somehow … Now when I’m going to work, when I’m walking, I have some fear, like maybe someone is coming,” he continued.

“Everyone comes to this country with new hope, but now there’s something, other feeling in the mind, like why, I didn’t say anything, why did this happen to me?”

Sikhs Against Asian Hate Crimes and Stop Hate Crime held a rally and a press conference May 1 at Smokey Park in South Richmond Hill to address the incident, PIX11 reported. Members of the Indian American, South Asian and Sikh community were joined by politicians to speak out against anti-Asian hate, the report added.

“Such a tragedy that one of the kindest, most giving groups of people is also one of the greatest targets,” New York Assemblymember Jenifer Rajkumar said at the gathering, the report said.

Police say they are now investigating the incident, but the Sikh community wants it looked at as a hate crime. As of last week, there have been 68 anti-Asian hate crimes in the city, compared to 15 during the same period in 2020, the report asserted.

Ahluwalia did suffer minor injuries to his head, which included internal bleeding. He is expected to be OK, reports added.