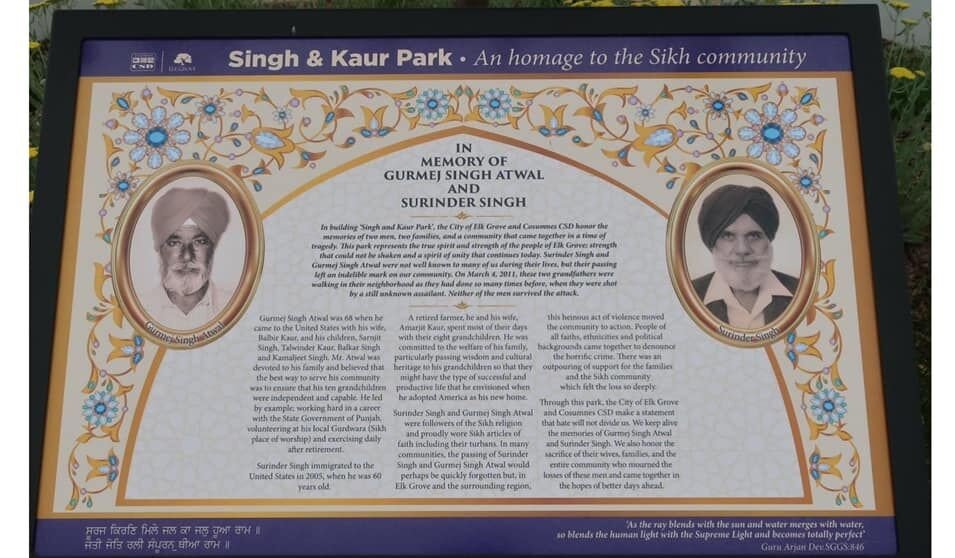 “Singh and Kaur Park,” which opened recently in Elk Grove, Calif., is named in remembrance of two Elk Grove Sikh American residents, Gurmej Singh Atwal and Surinder Singh, who were murdered in 2011. In the park, a plaque describes the two men and the injustice of their deaths. “It also demonstrates the commitment our community has to honoring our diversity,” said Elk Grove Indian American Mayor Bobbie Singh-Allen. (Bobbie Singh-Allen for Mayor/Facebook photo)

The city of Elk Grove, Calif., recently opened its 100th park which is named after two Elk Grove Sikh American residents, Gurmej Singh Atwal and Surinder Singh, who were fatally shot in 2011 during what police investigated as a possible hate crime.

The landscape, reported CBS Sacramento, draws inspiration from Mogul architecture and Punjabi culture and houses two sculptures featuring some of the most recognizable Sikh symbols.

“It’s a beautiful tribute to Surinder Singh and Gurmej Atwal, two Sikh men who were tragically killed in our community in 2011, but it also demonstrates the commitment our community has to honoring our diversity,” said Elk Grove Indian American Mayor Bobbie Singh-Allen in a statement.

On March 4, 2011, Atwal, 78, and Singh, 65, were taking an afternoon walk in the city. They were sitting down briefly, when an unidentified assailant started shooting at the long-time residents.

Singh died at the scene, while Atwal, who was shot twice in the chest, was in critical condition for six weeks before succumbing to his injuries. He had lost the use of most of his organs and remained on a ventilator, unable to speak, for the duration of his hospital stay.

In 2019, the Elk Grove Police Department announced that it has reopened the case. In a video statement posted to Facebook, Elk Grove Police Chief Tim Albright said the yet-unresolved case was important to the police department and the local community.

“I stand poised with members of our organization to take a fresh look at this case,” he said. “Through advances in technology, we have the opportunity to look at the evidence in a different light.”

“Through fresh investigative eyes, we have the opportunity to dig a little deeper. Our desire would be to bring closure to the Atwal and Singh families, and bring closure for this community,” said Albright. (Read earlier India-West story here: https://bit.ly/3vABEzV)

In the park, a plaque describes the two men and the injustice of their deaths.

Singh-Allen told FOX40 that she believes the park will help solve the murders.

“The Sikh community believes in something called ‘charhdi kala.’ Charhdi kala means ‘eternal optimism,’” she told FOX40. “In this park, we find eternal optimism and hope, even though it took a tragedy to get here.”