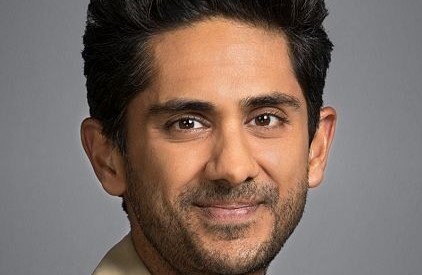 Indian-origin actor Adhir Kalyan plays the role of Awalmir (“Al”), an Aghan interpreter who has just arrived in the U.S., in the new CBS show, “United States of Al.” (cbs.com photo)

Adhir Kalyan is back on CBS, doing what he does best: comedy.

The South African actor of Indian descent, who previously starred on the hit CBS comedy series, “Rules of Engagement,” playing Timmy for five seasons, now appears in a starring role in the new CBS comedy, “The United States of AI.”

The plot of the comedy, which aired for the first time on April 1, is set around the friendship between Riley (Parker Young), a Marine combat veteran struggling to readjust to civilian life in Ohio, and Awalmir (“Al”) (Kalyan), the interpreter who served with his unit in Afghanistan and has just arrived to start a new life in America.

“Moments like these are rare in this line of work. People like this, even rarer,” Kalyan wrote on Instagram the day the show premiered alongside a photo of the cast.

It is created by “The Big Bang Theory” alumni David Goetsch and Maria Ferrari, and executive produced by Reza Aslan, a scholar of religious studies, and Mahyad Tousi.

Born and raised in Durban, South Africa, Kalyan, who currently resides in Los Angeles, Calif., with his wife and newborn baby, has been acting in films and television for over 15 years.

Kalyan’s television credits include a recurring role in the Netflix series, “Arrested Development,” and in the Amazon series, “I Love Dick,” with Kevin Bacon and Kathryn Hahn.

Alongside “Rules of Engagement,” he’s also widely known for his roles as Raja on the critically acclaimed series, “Aliens in America,” and as Dr. Raj Paresh on “Nip/Tuck.” His additional credits include the series, “Second Chance,” and guest-starring appearances on “The Goldbergs” and “The Guest Book.”

Additionally, he can be seen in supporting roles in the films, “Chemical Hearts,” starring Lili Reinheart, “A Nice Girl Like You” and the upcoming comedy, “Shriver.”