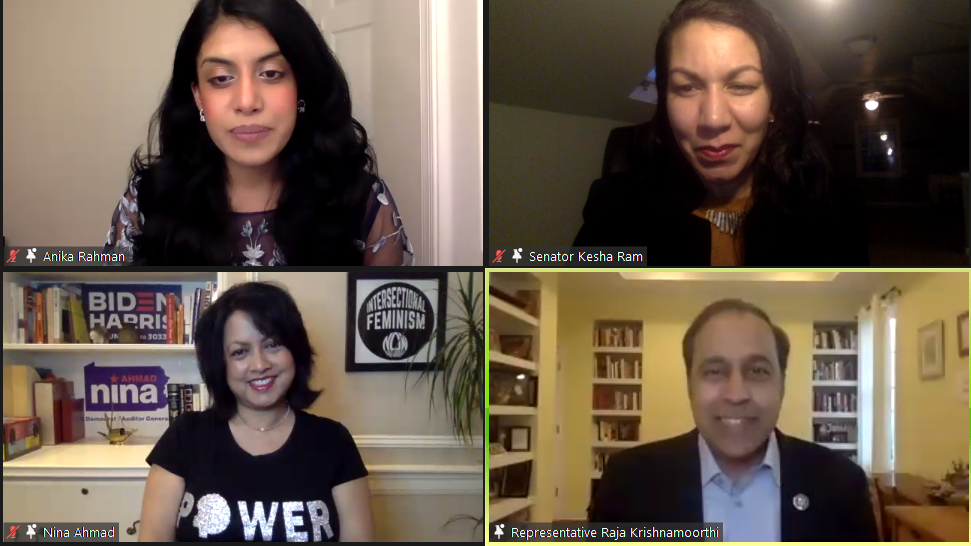 The new organization aims to harness the momentum of its grassroots efforts during the 2020 election, which propelled President Joe Biden and Vice President Kamala Harris to the White House, and flipped the Senate with the wins of Democrats Jon Ossoff and Raphael Warnock in Georgia. SAFA is now aiming to get behind Democratic candidates in the House and Senate who are contesting in the 2022 midterm election.

Neha Dewan, who served as the national director for South Asians for Biden and national co-chair for South Asians for Hillary in 2016, will serve as SAFA’s national director. The organization’s advisory council includes Rep. Ro Khanna, D-California; Virginia state Senator Ghazala Hashmi; Ravi Chaudhury, who served in the Obama/Biden Administration on the President’s Advisory Commission on AAPIs, where he developed strategies for Asian American veterans and their families; and Hayward, California city councilwoman Aisha Wahab.

“One of the most significant trends we’re seeing is more South Asians running for office,” said Rep. Raja Krishnamoorthi, D-Illinois, at the May 6 event. The congressman first ran for office in 2012, losing spectacularly to Iraq war veteran Tammy Duckworth. In 2016, when Duckworth ran for the Senate, Krishnamoorthi ran for her vacated seat and earned her endorsement.

In the 2018 midterms, the Chicago Tribune noted that 45 South Asian Americans were running for office in the state and dubbed it “the Raja effect.”

“If that bozo can run and win, maybe I can too,” joked Krishnamoorthi of himself. He noted that lots of South Asian Americans are getting appointed to roles within the Biden administration. “I can’t wait to see the full blossoming of that progress.”

Reshma Saujani, founder of Girls Who Code, spoke about the effect of the first Indian American vice president. “When Kamala Harris got elected, our community felt seen. We are stepping into our power.”

In a pre-recorded video, Maya Harris, Kamala Harris’ younger sister, said: “We knew the South Asian American community would make the key difference in this election. We were the pivotal voting block in local and state elections.”

Maya Harris lauded the new administration for “hitting the ground running on Day 1” to roll back the excesses of former President Donald Trump’s tenure at the White House.

“The victory in November was a beginning, not an end. Congratulations on the next chapter in your organizing efforts,” she said.

Rep. Judy Chu, D-California, chair of the Congressional Asian Pacific American Caucus, also joined SAFA’s launch via a pre-recorded message. “Over the past year, we are seeing the growing power of the South Asian community. Your power and influence is visible,” she said, adding, “I’m so glad seeing you harness the energy you have built.”

Chu noted that the AAPI community has the highest rising voter turnout of any ethnic group, especially younger AAPIs. She credited AAPIs for flipping the Senate in Georgia.

“Our community has been under-represented and overlooked for too long,” said Shaikh.

Veteran political activist Bel Leong Hong, who co-founded the AAPI Victory Fund with Shekar Narasimhan and Dilawar Syed, said she and Narasimhan created a coalition of AAPIs in 2007, and created an alliance by joining in solidarity with Black, Asian American and LGBTQ civil rights organizations. “By building those alliances, we were collectively heard,” she said.

Sameera Fazili, deputy director of the National Economic Council in the Biden administration, and Rohini Kosoglu, Vice President Harris’ domestic policy advisor, engaged in a panel discussion. “We have a chance to restore and revitalize American democracy and embrace its diversity,” she said,

“At the end of the day, we do this work for our children, for them to have a better chance in this country,” said Kosoglu.