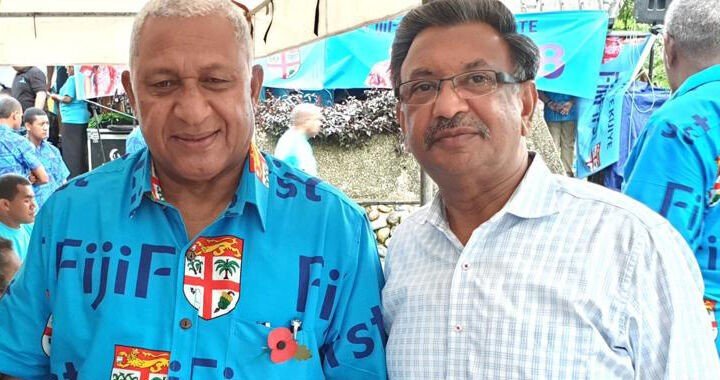 Vinod Bhindi, a Fijian Indian American successful entrepreneur and businessman in Southern California, has officially assumed the post of Honorary Consul of Fiji in Los Angeles.

Bhindi, the owner of Bhindi Jewelers headquartered in Artesia, California, with four total locations in the U.S. – three in California; one in Georgia – was born and raised in Fiji, emigrating to North America in 1975.

Initially, Bhindi and his family set up shop in Vancouver, British Columbia, Canada, opening their first Bhindi Jewelers. He said in an interview with the U.S. Fiji Times that during the early years, he would spend more than half the year in Fiji, and the other in Canada. His brothers managed the store while he was gone, he said in the report.

In 1984, the Bhindi family took a chance to grow the business and moved it to Artesia, where it is now.

“We established our roots in ‘Little India’ in Artesia, California. Here began my mission to become a household name in the South Asian community,” Vinod Bhindi noted in the report.

Bhindi, noting his decades of top-performing experience in the jewelry and land development industries in Fiji and the U.S., said he “aspired to continue with my community involvement by pursuing a role as Honorary Consul of Fiji in Los Angeles.”

He said he believes that his influence, integrity and vast work experience made him a suitable candidate for the position.

“As a Fiji-born and Fiji-raised professional, I intend to represent Fiji’s best interests in other parts of the world as well. Overall, I would like to help promote the development of the commercial, economic, cultural and tourism industry in Fiji,” he said in the report.

Bhindi stressed his desire to build relationships with the Fiji people in the U.S., having been a part of many religious Fiji organizations and temples.

“Religion is at the core of all life and it has definitely played a great influence on mine. By following the principles of Hinduism, I feel centered,” he explained. “Religion allows me to understand the complexities of the world around me and that is why I strongly support these organizations. They foster a strong sense of Fijian community,” he added in the report.

Another way Bhindi has helped out with the community was through a philanthropic effort to help relocate squatters from the mangrove swamps settlement in Vatuwaga.

He notes in the report that he and his brothers Jayant and Dhanesh donated $12 million for the effort, and, upon government approval, would relocate the squatters.

For the last 32 years, Bhindi notes that he has traveled to Fiji two to four times per year building on the family’s community service efforts.

He says he has financially contributed to and volunteered with many nonprofits and orphanages in Fiji. He has also been hands-on with these community service efforts by supplying food to those in need, the report notes.

When possible, he said he brings lunches and dinner to the children and adults who receive aid from the organizations he works with and talks openly with them.

“Understanding their concerns and their views is important to me – it allows me to connect with the most vulnerable populations of Fiji,” he said.

In addition to Bhindi, other honorary consuls include Jay Singh in San Francisco, Dr. Karen Lawson in Philadelphia, Bobby Naicker in Canada, and Elizue Lima in Brazil.

The consuls are appointed by the government of the Republic of Fiji and accepted by the U.S. State Department. The honorary consul officers recognized by the U.S. government are American citizens who perform consular services on a part-time and often voluntary basis.

Singh noted in his September interview that trade with Fiji was open and they had the COVID-19 pandemic under control. More information about the commission can be found at www.FijiTradeCommission.com.