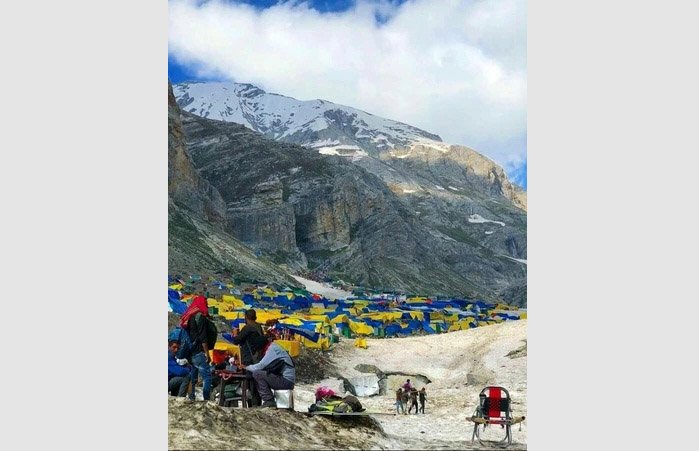 NEW DELHI -The Amarnath shrine, located to the north of Pahalgam in Kashmir, and south of the Zojila Pass, gateway to Ladakh, is believed to be the holy spot where Lord Shiva took Samadhi, before narrating the story of eternity and immortality to Goddess Parvati, hence the name Amarnath. The remote mountainous cave, tucked away from living beings, is at an altitude of 13,000 ft.

Yatra pilgrims vary from 3 to 4 lakhs each year.

The Amarnath Cave can be accessed through two routes. The traditional one is from Pahalgam, which is 33 kms long, with a journey time of five days to and fro. The second route from Baltal is new and shorter, 18 kms from the roadhead, and the Yatra can be done in a day. The two routes meet at Sangam, for the final 3 km trek up to the Holy Cave.

The duration and schedule of the Yatra is decided each year, keeping in view the extent of snowfall in the preceding winter, and the date of Raksha Bandhan, on which the Yatra traditionally concludes. In earlier times the Yatra would last for around two weeks, with persistent demand to increase the duration and was streamlined to a period to 60 days.

It encourages economic activity providing livelihood to many. Every year thousands of Kashmiri locals join the Yatra, offering their services with ponies, palanquins, motor transport, hospitality, and associated logistics. Similarly transport and hospitality services providers in Jammu, and airlines from all over the country benefit from the Yatra.

Terrorist threat to the Yatra is however significant. In 1993, Pakistan-based Harkat-ul-Ansar had announced a ban on the Yatra for two years. In 1998, Harkatul Mujaheedin declared a ban on the Yatra, two days after it began. The Yatra, however, continued under heavy security arrangements. Major terrorist attacks on Yatris in the past, include Pahalgam in 2000, Sheshnag in 2001 and Nunwan Camp in 2002. In 2003 and 2006, terrorists hurled grenades at vehicles carrying pilgrims in Srinagar and Ganderbal respectively. In July 2017, a bus carrying pilgrims was attacked in Anantnag District, killing seven people, and injuring nineteen. In response to a question in the Parliament on July 25, 2017, Minister of Home Affairs stated that from 1990 to 2017, 36 terrorist attacks had been reported on Yatris, in which 53 Yatris were killed and 167 Yatris were injured.

An extensive security grid is deployed for the Yatra every year. The Indian Army, Central Armed Police Forces and J&K Police provide a 3-tier counter terrorist security structure. Additionally, State Disaster Response Force, National Disaster Response Force, Mountain Rescue Teams are deployed to deal with natural disasters. The first tier creates a secure envelope with the Forces dominating the mountain heights in and around the area. The second tier does route opening and security to provide safe passage for the yatris. The third tier provides security at camps enroute, including frisking of yatris and their baggage. In addition, yatri convoys moving from Jammu to Nunwan (Pahalgam) and Baltal and back, are accompanied by armed police personnel.

This year The Resistance Front, a terrorist outfit that came up after August 2019, a proxy of the Lashkar-e-Toiba, has threatened to “spill blood” during the yatra. Notwithstanding the threat, because of the two years gap in the Yatra, higher numbers of pilgrims are expected. Therefore, additional provisions in terms of numbers of security forces and technologies to improve intelligence, surveillance and administration have been incorporated in the scheme of things.

The Yatra has been affected by natural disasters on numerous occasions. In 1996 heavy rains, snowstorms and avalanches resulted in about 60,000 yatris being stranded at different points. 243 people were reported dead, and hundreds of people were severely affected by exposure to the cold, high altitude problems, and accidents caused by the stampede due to widespread panic among the yatris. In fact, the Shri Amarnathji Shrine Board was constituted as corrective measures post the 1996 disaster.

In 2015, three people died in the multiple mudslides in Kulan, Gagangir and Sonamarg villages. The Srinagar – Leh National Highway, which leads to the Baltal base camp, remained closed for three days. In 2018, five people died and four were injured after a landslide triggered by flash floods hit pilgrims near Brarimarg, on the Baltal route. Almost every year the Yatra is suspended for short durations and sometimes pilgrims are diverted from one route to another to keep the flow going.

This year severe rainfall at the higher reaches of the cave, triggered high-speed muddy slush that washed away 25 to 30 tents and five langars from the base camp. 16 people have died, and 40 injured, even as some are still missing. 15,000 pilgrims have been evacuated.

Threat of natural disasters are not unique to Amarnath or Kashmir, it is the fragility of the Himalayas, and the associated complex processes like deforestation, soil erosion, global warming, weakening glaciers and severe localized rainfall. Even when there have been no natural disasters, the ice Shiva Lingam had melted well before the close of Yatra due to environmental factors.

Clearly losses due to natural disasters far exceed terrorist attacks on the Yatra. Nonetheless, in Kashmir, terrorist threat and natural disasters are often concomitant and need to be dealt with deftly. In September 2014, even as Kashmir was enduring the worst floods, with South Kashmir and Srinagar fully inundated, Indian Army undertook disaster rescue and relief, while simultaneously eliminating infiltration bids from Pakistan across the line of control.

The long spell of terrorist incident-free Yatra between 2006 and 2017, can be attributed to lessons learnt and year on year strengthening of the security grid. Similar strategies need to be applied to mitigate natural disasters and deal with the aftermath.

Management of the Yatra in terms of duration, number of pilgrims, modes of transportation, siting of base camps and staging areas must factor the fragile ecology and environment. Well formulated plans must go hand in hand with effective implementation.

The makeshift camps must be replaced by permanent assets sited carefully keeping in mind potential threats, natural disasters, and terrorists.

The number of Yatris must be determined based on the capacities established, and no ad hoc and makeshift arrangements should be permitted.

The stretch between Sangam and the Holy Cave should be a ‘restricted zone’, with only medical facilities and essential security. Langars and other administrative paraphernalia must remain outside this zone.

Use of helicopters for Yatra must be controlled keeping in mind ecological factors. Eco-friendly disposal of waste should be high priority. In 2015, the Army undertook a well-planned extensive plantation drive along the Yatra route in collaboration with the Govt of J&K. The idea was to help nature renew, even as humans sought spiritual blessings and livelihood from its benevolence. Responsibility and sensitivity for the sake of eternity is essential in our actions.