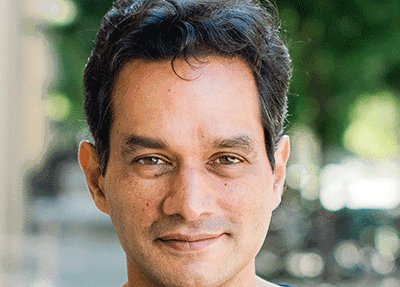 The 2021 HHMI Investigators are diving deep into tough questions that span the landscape of biology and medicine. And the new cohort of 33 scientists that HHMI announced represents outstanding science from across the United States, according to the release.

Uncovering the three-dimensional structures of biological molecules can bring valuable insights into their function. A detailed 3-D map of a virus’s RNA could reveal vulnerable nooks and crannies that might be targets for pathogen-neutralizing drugs, Das’ profile notes.

In the past, most RNA molecules have resisted giving up their structural secrets. But “the dream – and the major goal of my research – has been to be able to take any RNA sequence and rapidly figure out its 3-D structure,” said the Indian American researcher.

Still, the shapes of most RNA molecules remain elusive. So Das and his colleagues doubled down on an imaging technique called cryo-electron microscopy. The effort finally nailed the structure of the first RNA-only enzyme discovered, 40 years after it was first identified. Now, Das’s team hopes to build a 3-D atlas of all of nature’s RNA molecules, it said.

When the COVID-19 pandemic struck in 2020, Das quickly pivoted to study the new threat, seeking the 3-D structures of key segments of coronavirus RNA. His lab and colleagues identified “tantalizing holes and crevices” that could be binding sites for drugs, Das said. They’re now developing anti-viral drugs based on those discoveries, as well as probing and improving COVID-19 mRNA vaccines, the bio added.

These scientists and their fellow 2021 Investigators could radically change how we think about biology, human health, and disease. HHMI will invest at least $300 million in these new Investigators, who come from 21 U.S. institutions and will join HHMI’s Investigator community, which currently includes approximately 250 scientists, it said.

By employing scientists as HHMI Investigators, rather than awarding them research grants, she said, the Institute is guided by the principle of “people, not projects.”

“We encourage Investigators to follow new directions, learn new methods, and think in new ways,” Clapham said. “This could lead to scientific breakthroughs that benefit humanity.”

Each new Investigator will receive roughly $9 million over a seven-year term, which is renewable pending a successful scientific review. HHMI selected the new Investigators from more than 800 eligible applicants, the release notes.

To date, 32 current or former HHMI scientists have won the Nobel Prize. Investigators have made significant contributions across many research areas, including HIV vaccine development, microbiome and circadian rhythm research, immunotherapy, SARS-CoV-2 biology, and potential therapies and vaccines for COVID-19, among other fields, the release notes.