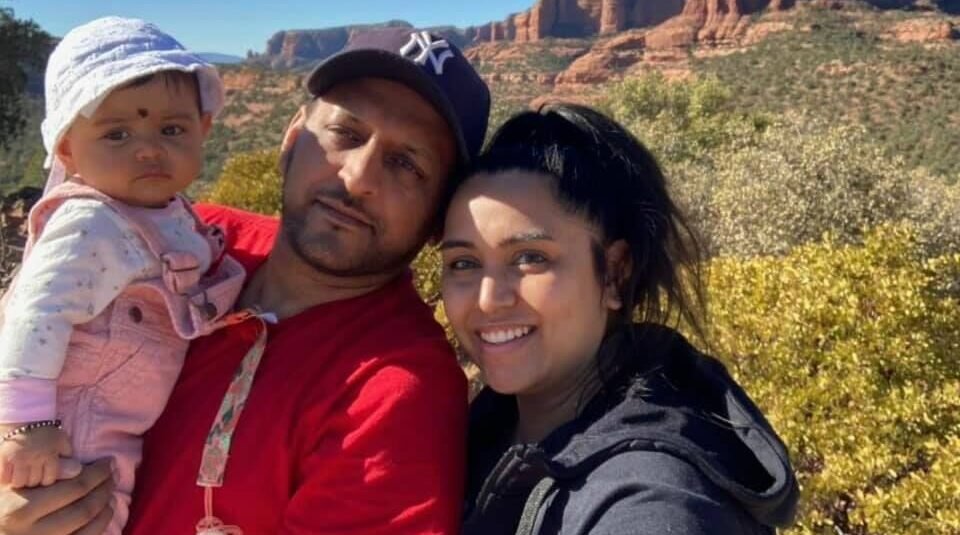 Bhavna and Vishal Patel and their one-year old daughter, Aishani, were killed last month as the 12-storey South Champlain Towers condominium complex, where they lived, collapsed. Trisha Devi, Bhavna’s friend, told India-West the Indian American family’s bodies were cremated July 15, and their ashes will be scattered in the Atlantic Ocean. (Trisha Devi/Facebook photo)

The bodies of Bhavna and Vishal Patel, and their one-year-old daughter, Aishani, who were killed last month as the 12-storey South Champlain Towers in Surfside, Florida, condominium complex, where they lived, collapsed, were cremated July 15.

The ashes of the family will be scattered in the Atlantic Ocean, Trisha Devi, Bhavna Patel’s friend, told India-West.

Devi had known Bhavna for more than seven years: her mother met Bhavna at the temple and introduced the two, who soon became fast friends.

“Bhavna was such a wonderful person. She had a beautiful soul,” said Devi emotionally, remarking on the June 24 apparently hugely preventable tragedy, which has killed at least 97 people. Eleven others were injured, while 34 people were rescued. Search and rescue efforts are still ongoing to find another eight people.

The collapse of the building complex was reportedly due to major structural issues, which had been identified years earlier. Work was scheduled to begin on the 40-year-old building before it collapsed.

Devi organized a prayer service for the Patels on July 2 at the Shri Mariamman Temple in Opa Locka, Florida, when their bodies had not yet been found, despite the massive search and rescue effort. Bhavna and Vishal’s bodies were found July 9, while little Aishani’s body was found July 14.

Rishi Goolcharran, a close friend of the Indian American couple and a priest at the Shri Mariamman Temple, told Sky News: “They are more than family to me, they are loved ones, more than family, because they lived in this temple for a long time.”

“I still cannot believe that they leave us, but we just have to have a very strong bond of the memory of what they actually were to us,” he said.

Many family members travelled from all parts of the country to attend the prayer service and express their hopes for recovery of the Patels, alive. But that was not to be.

Bhavna Patel, 36, was four months pregnant at the time of her death. She was a dual citizen of the U.S. and the United Kingdom. She and Vishal had moved to South Champlain Towers two years ago: local media said the couple made the move to Surfside because of its beautiful beaches and clear blue skies.

Sarina Patel, Vishal Patel’s niece, told The Miami Herald that she had called her uncle to wish him a happy Father’s Day and to make plans for an upcoming visit for which she had just bought a plane ticket. She had never met her little niece Aishani.

“Though our baby girl was not with us long she had an impact on each of our hearts that will last a lifetime,” Sarina Patel said.

When the couple first met, Bhavna still lived in the UK, while Vishal lived in California. They were in a 10-year long distance relationship before their wedding in New Jersey, after which they moved to Miami and then Surfside.

“Bhavna had the sweetest soul and was the most down-to-earth person. She had a smile that could light up a room. Anything that brought you joy truly brought her joy, too,” Sarina Patel told The Miami Herald.

Vishal, too, she said, was a deeply genuine, kind person who never took himself too seriously. “He always knew how to liven up a party with his goofy faces and fun personality,” she said.

“We are so broken that we will never have gotten the opportunity to meet the fourth member of their charming family,” Sarina Patel said. “Vishal and Bhavna were extraordinary people with the biggest hearts full of compassion and love for all. Those who were lucky enough to have known them have truly been so blessed.”

A wooden heart, with hundreds of signatures for Vishal, Bhavna, and Aishani, has been erected near the collapsed building.