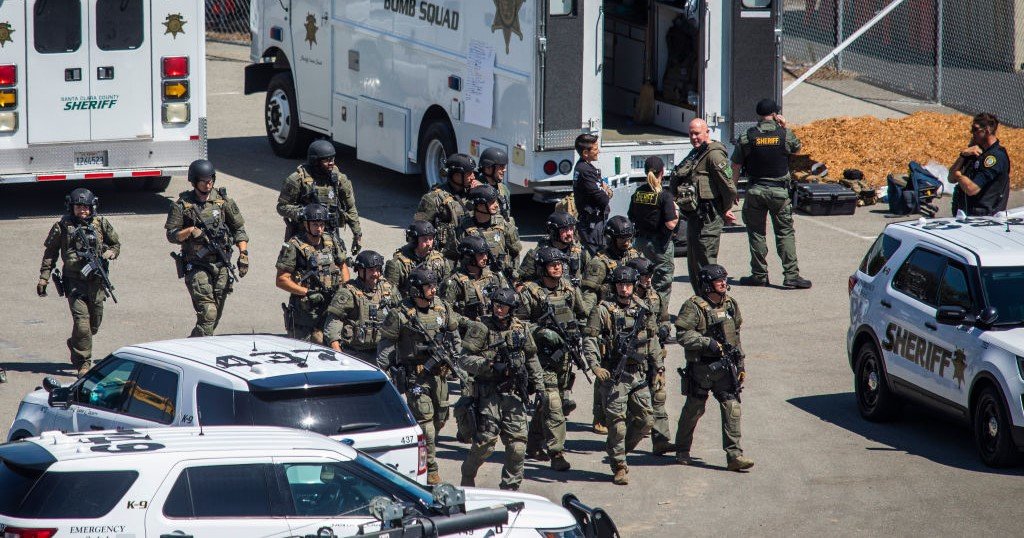 Tactical law enforcement officers move through the Valley Transportation Authority light-rail yard where a mass shooting occurred on May 26, 2021 in San Jose, California. A VTA employee opened fire at the yard, with preliminary reports indicating nine people dead including the gunman. A large number of Indian Americans are employed as bus drivers, light rail operators, and in administrative capacities at the VTA. (Philip Pacheco/Getty Images)

A suicidal shooter killed at least eight people early May 26 morning at the Valley Transportation Authority control center in San Jose, California, before turning the gun on himself.

The shooting occurred around 6:24 a.m., directly outside the VTA facility, in the maintenance yard. A union meeting was scheduled to take place that morning. Several explosive devices were found inside the VTA control center. Law enforcement officials have closed down the building and VTA light rail services were cancelled for the day as of 12 p.m.

Santa Clara County Sheriff Laurie Smith said during a press briefing that police officers entered the VTA control center while the mass shooting was still happening. Police officers attempted rescue efforts, but the results of those efforts, along with the number of people wounded or hospitalized, has not yet been released.

A large number of Indian Americans are employed as bus drivers, light rail operators, and in administrative capacities at the VTA. The Santa Clara County Sheriff’s Department had not released a list of victims May 26 afternoon, pending notification of next of kin.

The Sikh Coalition posted a statement to Twitter: “The Sikh Coalition was deeply saddened to learn of this morning’s shooting at a San Jose, CA VTA facility. We understand that there are many Sikhs employed at this facility, and the community is in our prayers and our hearts as we work to learn more.”

Sikh Coalition spokeswoman Rajanpreet Kaur told India-West the organization has been in touch with local law enforcement agencies, but has not yet received the names of the victims.

Rep. Ro Khanna, who represents portions of the Silicon Valley, which is served by VTA, released a statement about the tragedy. “While much still remains to be confirmed at this time, one thing is abundantly clear: the gun violence epidemic will continue to rage unless we take concrete action to protect our country. It was our community today, but it will be someone else’s tomorrow.”

“My heart is shattered thinking of the lives lost, as well as the families & communities upended by this senseless tragedy. These were some of our frontline heroes, who kept the South Bay moving through the worst of the pandemic,” said the Indian American congressman.

“Over eighty percent of Americans want common sense gun control measures. Background checks, ‘red flag’ laws, and longer waiting periods are all within reach. When I head back to Washington, I will continue to push for this urgently needed legislation,” he said.

Assemblymember Ash Kalra, who represents portions of the Silicon Valley in the California state Legislature, said on social media: “As a former VTA Chair & Board Member, I am totally devastated to continue to learn more about the tragic shooting at the Valley Transportation Authority facility this morning.”

Kalra posted a link to Working Partnerships USA, which has set up a fundraiser to aid families of the victims. The fundraiser can be accessed here: https://bit.ly/2RFK2QJ.

Several publications have identified the gunman as Samuel James Cassidy, 57, an employee of the VTA.

Cassidy worked as a substation maintainer at the facility. According to several media reports, a fire broke out at his home on Angmar Ct., which is about 1.5 miles away from the control center, before he opened gunfire at the early morning union meeting at 6:45 a.m.