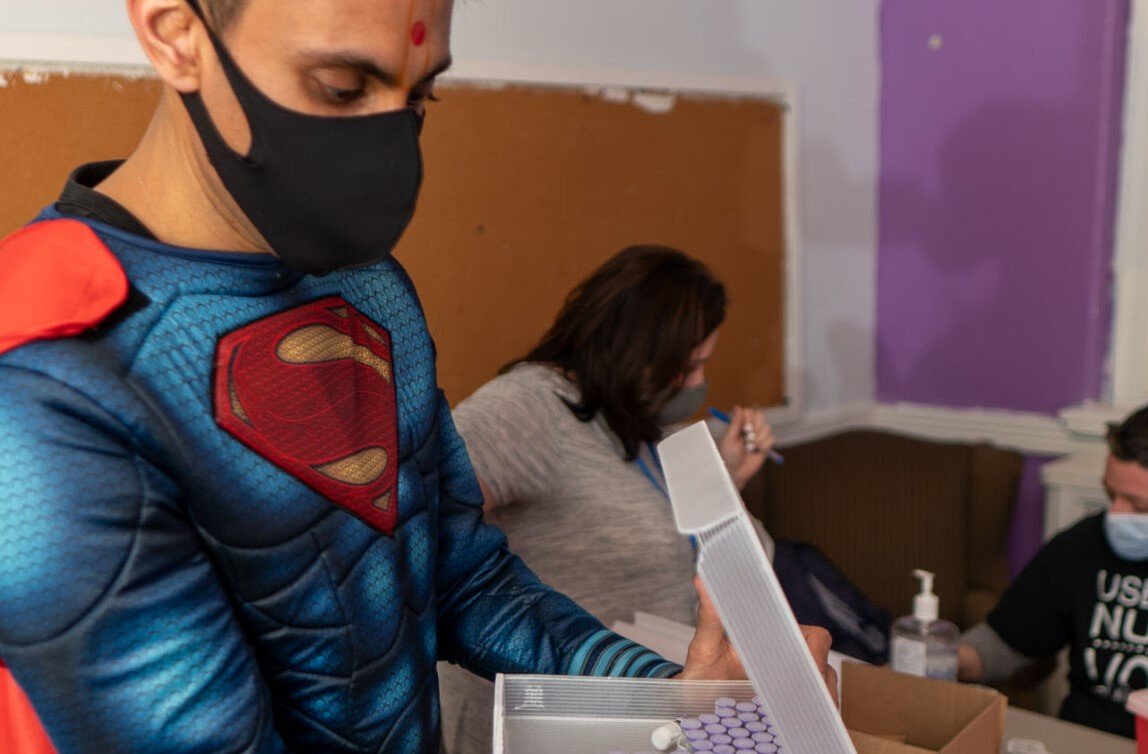 Indian American pharmacist Mayank Amin has been instrumental in getting Covid-19 vaccines into the arms of thousands of people in Lansdale, Pennsylvania. (Skippack Pharmacy/Facebook photo)

Not all heroes wear capes, but this one does! Dr. Mayank Amin, 36, the owner of Skippack Pharmacy in Lansdale, Pennsylvania, has been working nonstop since the onset of this pandemic to keep his community safe. And ever since his pharmacy was selected to administer Covid-19 vaccines, he’s had little time for anything else.

But along with his work in getting the vaccine into the arms of thousands of people who need it, the Indian American pharmacist is also gaining popularity because of the Superman suit that he dons while making house calls. The tradition, Amin told “Good Morning America,” started on New Year’s Eve, when he had a prescription to fill for a child, and since the pharmacy would be closed by the time he finished filling it, he decided to make a home delivery.

“So I had a (Superman) costume. I went out to their house and rang the doorbell. The little boy came to the door and actually thought Superman came to deliver his medications,” Amin told “GMA.” (The customer’s) son, to this day, thinks I’m Superman.”

Amin decided to continue to surprise people in his community with the suit. He told “Good Morning America” that elderly people who received shots stopped him and asked him to get pictures.

One man, an Army veteran, stopped Amin and said something that really touched him, he told the show.

“He said, ‘As people that serve this country, we usually bow down and we salute our dignitaries, other veterans, people that serve our country. Today I’m giving you the biggest medal that any veteran can give,’” Amin was quoted as saying. “Then he put his hand up to his forehead and saluted me.”

Minnesota Senator Amy Klobuchar lauded Amin’s efforts, writing on Twitter March 16: “Dr. Mayank Amin, you and every frontline worker are ‘superheroes.’ Our nation owes you a debt of gratitude for your bravery during this time of crisis.”

Often driving through the snow, Amin has vaccinated thousands in his Superman suit.

Amin, known as Dr. Mak, set up a vaccination clinic on Super Bowl Sunday at the local firehouse that drew more than 1,000 people who kept their appointments for shots despite the snow that day, according to Reuters.

Amin, reported Reuters, has also vaccinated people by appointment at his pharmacy, including holding a special clinic for pregnant women and another one for children with underlying health conditions.

Even before the pandemic struck, Amin looked out for his community.

A 50-year-old independent pharmacy in Amin’s community had shut down while he had taken a break from being a pharmacist to change careers – becoming an event planner, according to “Good Morning America.” When he saw the concern among elderly neighbors about getting their medications after the local pharmacy closed, he decided to step in and build his own in the same space, it said.

“These folks were very lost,” Amin told “Good Morning America.” “So I said, ‘You know what? I’m going to stick up for my community and bring this place back to life.’ We’re going to be a community pharmacy and give people a memorable experience.’”

And then Covid-19 happened.

“When this pandemic first hit last year, I saw the fear in people’s faces when they were walking through our doors,” Amin told the show. “That’s when we went from 9 a.m. to whenever I couldn’t stand anymore. I’d be at the pharmacy till 2, 3, 4 o’clock in the morning every single day.”

Along with working overtime and dealing with the many hurdles associated with the vaccine rollout, Amin is also making sacrifices in his personal life.

The young pharmacist, said Reuters, reunites with his pregnant wife only on weekends as a health precaution and spends the week at his parents’ home in Lansdale.

He continues to hold several clinics in his bid to vaccinate everyone in his community before the arrival of his first child in May.