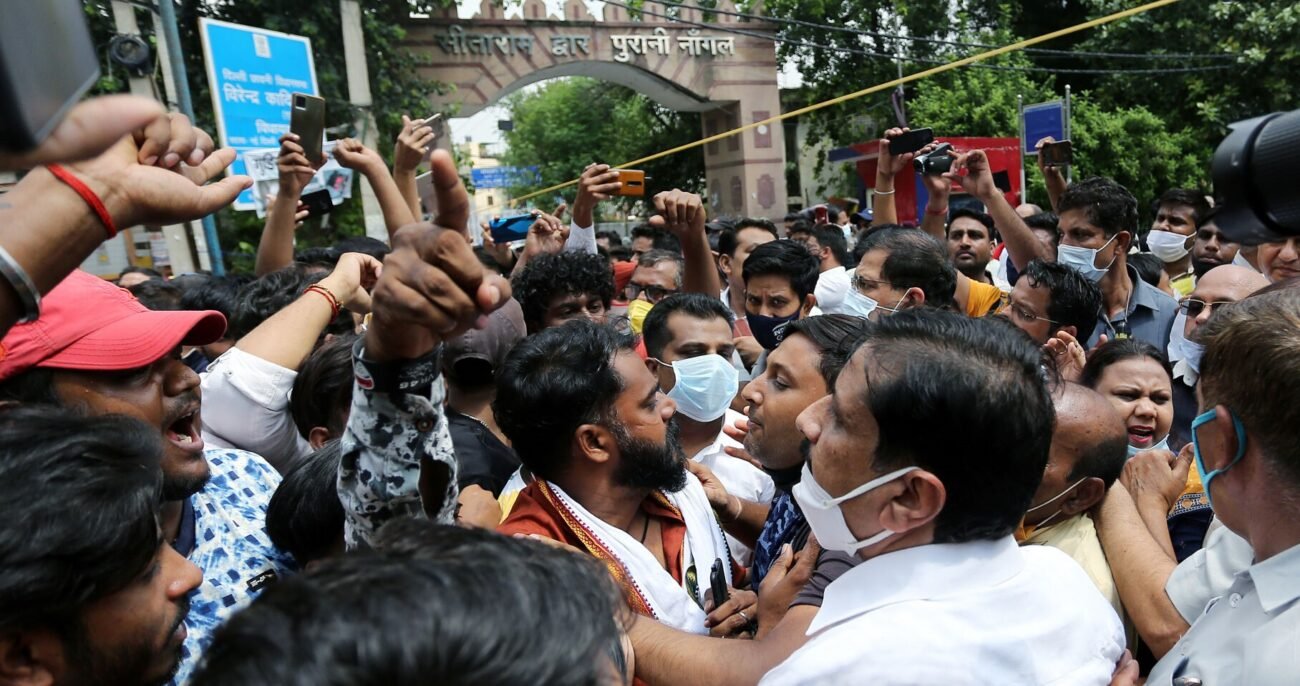 People stage a protest against an alleged rape and murder of a minor girl, at Cantonment in New Delhi on Aug. 4. (ANI photo)

NEW DELHI — Angry villagers in the Indian capital held a protest Aug. 5 outside a crematorium where they say a 9-year-old girl was raped and killed earlier this week.

The protesters, sitting on a makeshift stage, held placards demanding justice for the girl, who lived nearby. The case has revived outrage over the number of gruesome sexual crimes against women in India as well the treatment of those on the lowest rung of the country’s rigid caste system, from which the girl hailed.

Four men suspected in the crime, all of them workers at the crematorium, have been arrested but have yet to be charged, said police officer Ingit Pratap Singh.

Police said the girl told her mother on Aug. 1 that she was going to get water at a tap at the crematorium in southwest New Delhi. About 30 minutes later, police said, the crematorium’s priest called the mother, who was told that her daughter had been electrocuted.

The mother was shown her daughter’s body, which the suspects then cremated without calling authorities, police said.

The mother said she saw her daughter’s body on the floor of the crematorium with bruises all over. She said the priest and three other men at the crematorium told her not to call the police and threatened her.

The mother cannot be named due to Indian law that prohibits releasing information that could identify the victims of sexual crimes.

Villagers said some of the girl’s remains were saved from the crematorium.

Singh said the extent of the cremation meant a post-mortem examination was unable to establish whether the girl was raped or how she was killed.

“The cause of death is inconclusive,” he said.

Police said forensic experts were testing her clothing for bodily fluids or other evidence.

The suspects are in police custody but under Indian law can’t be formally charged until the police investigation is complete.

Rape and sexual violence have been under the spotlight in India since the 2012 gang rape and killing of a 23-year-old student on a New Delhi bus. The attack sparked massive protests and inspired lawmakers to order the creation of fast-track courts dedicated to rape cases and stiffen penalties for those convicted of the crime.

Four men sentenced to death for the 2012 attack were later hanged.

Tina Verma, an activist who was among the 200 protesters gathered Aug. 5 outside the crematorium, said she frequently used to see the girl begging outside a Sufi Muslim shrine just across from the cremation ground.

“I shudder at the thought of what was done to her,” said Verma, who has been on a hunger strike for two days to demand justice for the girl. “This is a barbaric crime and must be dealt with swiftly.”