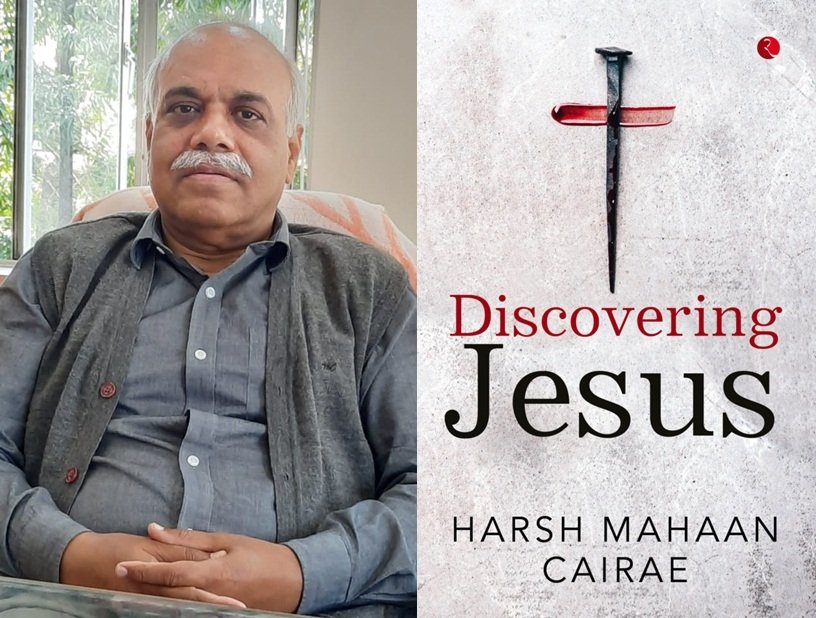 NEW DELHI, (IANS) – Veteran bureaucrat Harsh Mahaan Cairae is an avid reader and a student of philosophy and religion. He has studied the scriptures of several religions, of which the Vedas have been of special interest. He says that the teachings of Jesus Christ are identical to Vedic beliefs.

In his book “Discovering Jesus” (Rupa), he proceeds to look for the source of these beliefs reaching Jesus and finds that these were also the original beliefs of the Jewish people.

“Jesus did not acquire them from an external source. This raises a bigger question of how the beliefs of the Jews were identical with the Vedic beliefs. Were they in any way related to the Aryans? I have relied on several literary sources including my earlier book, ‘An Aryan Journey’ which was a research based on Vedic, Zoroastrian, Greek and Roman literary sources, and concluded that the Jews were Aryans and were of the group which called itself Devs as distinct from Asurs,” Cairae said. “Other sources of information, particularly genetics need to come in to take the issue to its logical conclusion,” he added.

“My first book was based primarily on research of Vedic and Zoroastrian scriptures in which I had traced the migration route of the Indo-Aryans. In this, I had come across a person in Iran, named Mani, who is believed to have been the founder of Manichaeism, a religion very widely practiced till the spread of Christianity. My findings led me to believe that this was the Vedic religion which had acquired a new name as Mani had introduced some reforms. Mani used to claim that he was the Apostle of Jesus Christ. The Manichaens claimed they represented true Christianity, while the Church considered them to be heretics. Heretics, but not followers of some other religion. This led me to believe that there is something wrong in understanding Jesus. Hence the study and the writing (of this book),” Cairae elaborated.

Christianity today is based on the beliefs and teachings laid down by Paul.

“Discovering Jesus” brings out evidence to show that Paul and the real apostles were not preaching together or the same things. Paul fought a running battle with them all his life and was not acknowledged as an apostle.

The book asserts that Jesus and his apostles believed in the transmigration of souls in which a person was born in a position based on his deeds in the previous life. The soul could go out of the cycle of rebirth and attain salvation by realizing the true nature of the self. The teachings of Jesus were thus diametrically opposite to what Christians believe today and as were laid down by Paul.

In showing that Paul was fighting with the apostles and not preaching with them, the book first brings out evidence from the Bible itself. The letters of Paul, that are a part of the New Testament and are called Epistles, show the discord. The differences he records include the debate between deeds and faith; animal sacrifice, baptism; laying on of hand; resurrection; and eternal judgement.

These are fundamental beliefs of Christianity today, which Paul has himself recorded, were issues on which the Apostles did not agree with him. For animal sacrifice, which Paul was requesting to be stopped immediately, the book brings out evidence to show that this was practiced in the Church.

James, an apostle, and the brother of Jesus had become the bishop of Jerusalem and the head of the Church of the apostles after the death of Jesus. No writings of anyone from this side have survived. All that has come down to us is from Pauline traditions.

Having shown that Paul was not on the same side as the apostles, the book proceeds to bring out the myths that Paul and the Pauline Church created to support their belief system and for that how the New Testament was tampered with. It shows that only the Gospel of Mathew was the genuine gospel accepted by the followers of the apostles. The rest of the New Testament is Pauline. To create a divine stature for Jesus, myths have been created of his birth from a virgin, miracles performed by him and his rising from the dead. The last myth has been created also to support the theory of the resurrection of the dead on the Day of Judgment. The book brings out evidence to show that the apostles and their followers did not believe in any of these myths.

To raise the stature of Paul to the level of an apostle, three things have been done, an extraordinary situation of his conversion to Christianity has been created, he has been shown performing miracles and finally to have been martyred for his faith.

Six fundamental elements of the Vedic beliefs have been found in the beliefs of the apostles and have been compared. These are:

* The religion had two distinct streams, one for common believers and the other for the spiritually inclined. The practices of the latter were the core of the religion.

* Secrecy was maintained of the core teachings.

*The belief that there was no difference between the Creator and the creation. The unbridgeable gap between God and man was not there.

*There was a belief in the rebirth of the soul in which the next birth was determined by the deeds of the previous birth. It was possible for the soul to go out of this cycle of births and deaths and attain salvation.

* The objective of a practitioner was to go out of the cycle of births and deaths and attain salvation. This is achieved by the realization that I and God are the same. I do not exist only He does.

*There were two philosophical thoughts prevalent, one the dualism of Sankhya and the other the non-dualism of Vedant.

The book brings out evidence to show that all these elements were present in the beliefs of the Christians declared heretics and Gnostics by the Pauline Church.