HomeFeaturedTelangana’s Yadadri Temple Seeks to be on Par with Tirupati 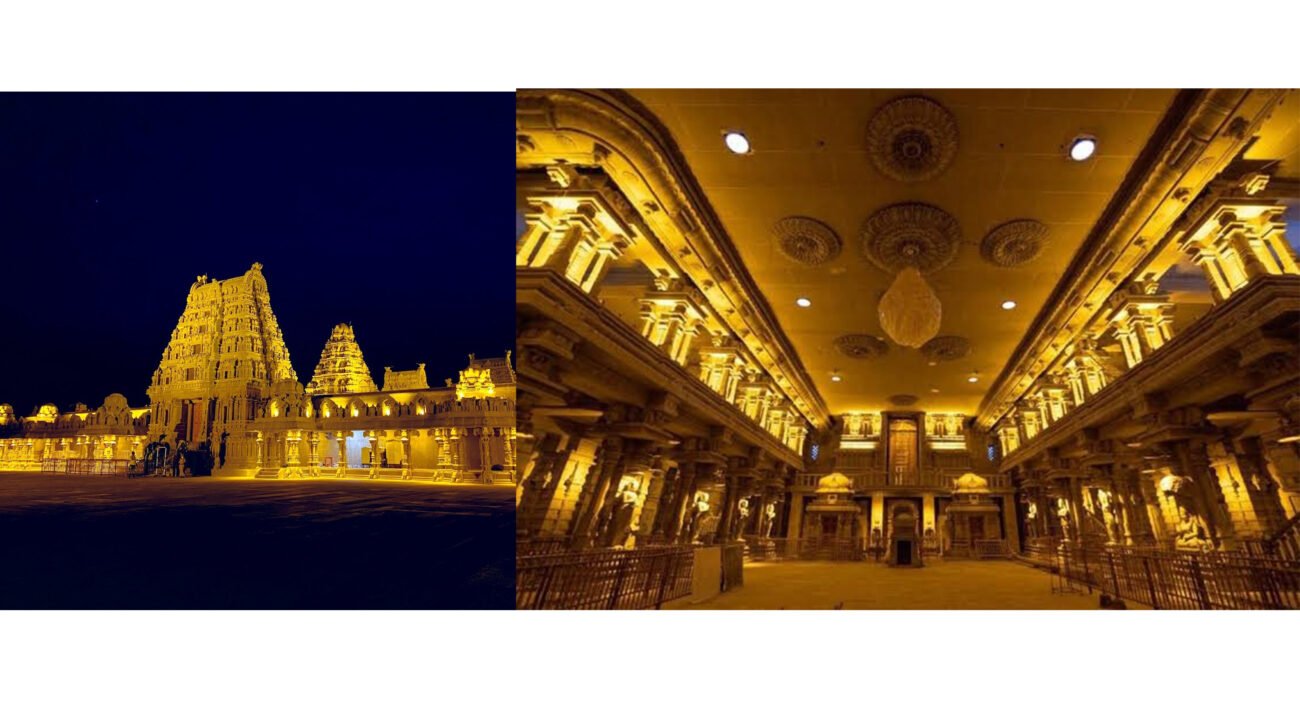 HYDERABAD (IANS) – After more than five years of renovation and reconstruction, Telangana’s Yadadri temple has transformed from a small hill shrine into a magnificent and sprawling pilgrimage center and an architectural marvel.

The mega project was taken up at a cost of Rs 2,000 crore and works were launched in 2016. After strenuous efforts put in by various agencies for more than five years, the temple was finally re-opened for devotees on Mar.28 while the other works around it are yet to be completed.

With elaborate rituals involving scores of priests, KCR, as the Chief Minister is popularly known, inaugurated the temple.

Accompanied by his wife Shoba Rao, other family members, host of cabinet ministers, TRS leaders and officials, KCR participated in the ‘Mahakumbha Samprokshana’. He performed Kalasha pujas and participated in the procession carrying the presiding deity from Balalayam to the sanctum sanctorum.

Whatever KCR plans always draws attention for its scale and magnificence. Be it Kaleshwaram, the world’s largest lift irrigation project built at a cost of about Rs 1 lakh crore, construction of the chief minister’s official residence or the ongoing new Secretariat Complex in Hyderabad, KCR was personally involved in the design and development of his dream projects.

The renovation of Yadadri temple is also part of KCR’s efforts to develop physical assets in line with the cultural identity of Telangana.

As bifurcation of undivided Andhra Pradesh led to the residuary state keeping most of the major temples, KCR drew an ambitious plan to revamp and renovate 1,000-year-old temple at Yadagirigutta into a temple at par with Sri Venkateswara temple at Tirumala in Andhra Pradesh, which is the world’s richest Hindu temple.

Before embarking on the project, KCR renamed Yadagirigutta as Yadadri. He took well-known pontiff Chinna Jeeyar Swamy, considered as his spiritual guru, with him on a helicopter survey of the temple and its surroundings. KCR decided to club the neighboring eight hills to make it a mega center of pilgrimage. Thus, the pilgrimage center will have nine hills against seven hills of Tirumala.

The government created Yadadri Temple Development Authority to execute the renovation and reconstruction works. Authorities have not used conventional materials such as cement, bricks and concrete in the project. They used only lime and mortar for the temple works as per heritage norms.

It is said to be the only temple in India which has been built with Krishna Shila (black stone). About 2.5 lakh tons of black stone was sourced from Prakasam and Guntur district in Andhra Pradesh for sculptors and other works.

Every day, about 1,500 workers, including 800 sculptors, from different places including Allagadda, Karimnagar and Tamil Nadu toiled long and hard to execute the mega project.

Temple’s chief architect Anand Sai visited several temples across South India before making a final plan. According to him, seven gopurams are inspired by Srirangam temple of Tiruchirapalli.

Gold plating of Vimana Gopuram or the main Gopuram at the temple has been inspired by Tirumala temple. The gold plating of Gopuram, which is an ongoing work, requires 125 kg gold. On an appeal by KCR, corporate houses, businessmen, public representatives and politicians late last year donated nearly 30 kg of gold.

KCR had announced the first donation of 1 kg 16 tolas gold to the temple on behalf of his family.

The Rajagopuram or the pyramidal structure at the temple entrance is seven-storey high. It is made of stones weighing 13,000 tonnes.

The Covid-19 pandemic had its impact on the pace of the work and led to the delay of more than two years.

The renovated temple is now a 17-acre, three-storey temple with seven gopurams and sculptures, which the officials believe would mesmerize devotees for years to come. While the overall project is spread over 2,000 acres, the development has been completed over 250 acres around the hill shrine.

The temple complex was earlier spread over just 2,500 square yards with hardly any space for devotees to move around after darshan or to get prasadam. Now the expanded and renovated complex can accommodate one lakh devotees.

Authorities expect 8,000 devotees to the temple every day and this number may go up to 40,000 on holidays.

According to YTDA officials, about Rs 1,000 crore have so far been spent on the entire project. While nearly Rs 280 crore was spent on temple renovation and reconstruction, the remaining amount went towards land acquisition, road laying and infrastructure development.