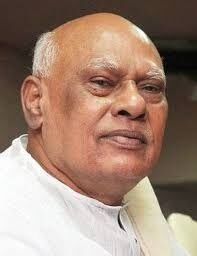 HYDERABAD – Tributes are pouring in from all corners of the Telugu states for former chief minister of combined Andhra Pradesh, K. Rosaiah, who passed away Dec. 4 at the age of 88.

Telangana chief minister K. Chandrashekhar Rao expressed his condolences, and remembered Rosaiah as one of the “leaders who brought many laurels to the posts he had held, such as the finance ministry.”

Telangana Governor Tamilisai Soundararajan expressed grief and shock at the passing away of the former Governor of Tamil Nadu and former chief minister of the erstwhile Andhra Pradesh.

Paying rich tributes to his memory, the governor termed him as an iconic politician in the undivided Andhra Pradesh.

“It is a great testimony to his unmatched acumen in administration that he presented the state budget for a record number of 15 times,” the governor observed.

In neighboring Andhra Pradesh from where Rosaiah hails, Chief Minister Y.S. Jagan Mohan Reddy expressed grief over the demise of Rosaiah, and conveyed condolences to the bereaved family members. Governor Biswabhushan Harichandan expressed sorrow over Rosaiah’s death, and described him as a leader with values.

Congress leaders from Telangana and Andhra Pradesh have paid tributes to the party veteran and loyalist.

The government of Telangana has announced a three-day mourning period for the former chief minister who was at the helm of affairs of the undivided state of Andhra Pradesh, from 2009 to 2011. Arrangements are being made for his funeral to be conducted with police honors.

Rosaiah is survived by his wife, three sons and a daughter.