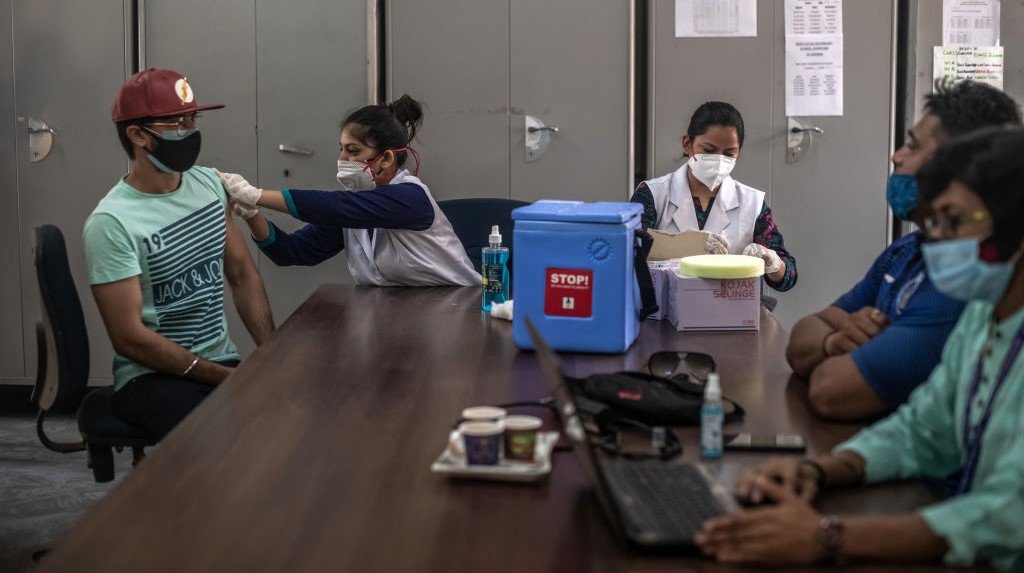 People receive their Covid-19 vaccines from medical workers at a vaccination center set up in the library of a government school on May 4, 2021 in New Delhi, India. (Rebecca Conway/Getty Images)

DES MOINES, Iowa — A third coronavirus variant that was first identified in hard-hit India has been uncovered in Iowa, state public health officials said May 4. The Iowa Department of Public Health said it has confirmed two cases of the variant, SARS-CoV-2 B.1.617.

Health officials are still learning about the characteristics of this strain, but it is not designated as a variant of concern, “indicating that there is not currently evidence of increased transmissibility or more severe disease caused by this variant,” the agency said in a statement, noting the recent U.S. advisory warning against travel to the South Asian nation.

Virus cases are rising quickly in India, where COVID-19 deaths have exceeded 220,000 and confirmed cases have surpassed 20 million.

The World Health Organization said in an April 26 coronavirus update that a preliminary study based on genetic sequencing shows the variant has a higher growth rate than other variants circulating in India, “suggesting potential increased transmissibility.” The agency said further study is urgently needed to determine its potential for increased spread and more severe disease.

The Iowa cases were detected in two adults in Jefferson County in southeast Iowa. Public health officials are investigating to determine where they were exposed to the virus strain.

Strains first found in the U.K. and Brazil have been identified as circulating in Iowa and are considered variants of concern because they spread easily and have the potential to cause more serious illness.

IDPH said with the variants circulating, it’s especially important for Iowans to get a COVID-19 vaccine. People also should continue to wear a mask in public places and practice social distancing when with people from outside the household.

Interest in vaccination has slowed in Iowa in recent weeks.

The Des Moines Register reported May 1 that Iowa turned down 71% of the COVID-19 vaccine supply it could have received from federal officials for next week, marking the second week the state has not had enough demand to accept the state’s full allotment.

Iowa has fully vaccinated 1.12 million people, or nearly 36% of the population, placing it 14th in the nation for the percentage of total population vaccinated, according to the U.S. Centers for Disease Control and Prevention.

The state reported 389 new confirmed cases and no new deaths on May 1.

Meanwhile, in Tennessee, officials in the state’s most populous county said April 29 that one case of a COVID-19 variant found in India has been identified in a person who had recently traveled there.

The Shelby County Task Force said one person has been found to have contracted the B1617 variant of the coronavirus. The person is under quarantine and the person’s past contacts are being investigated, officials said.

Variant coronavirus cases have been found in Tennessee, including strains found in the United Kingdom. Officials in Memphis are still encouraging people to get tested if they feel sick or have had contact with an infected person, to help pinpoint if variants have emerged or spread.