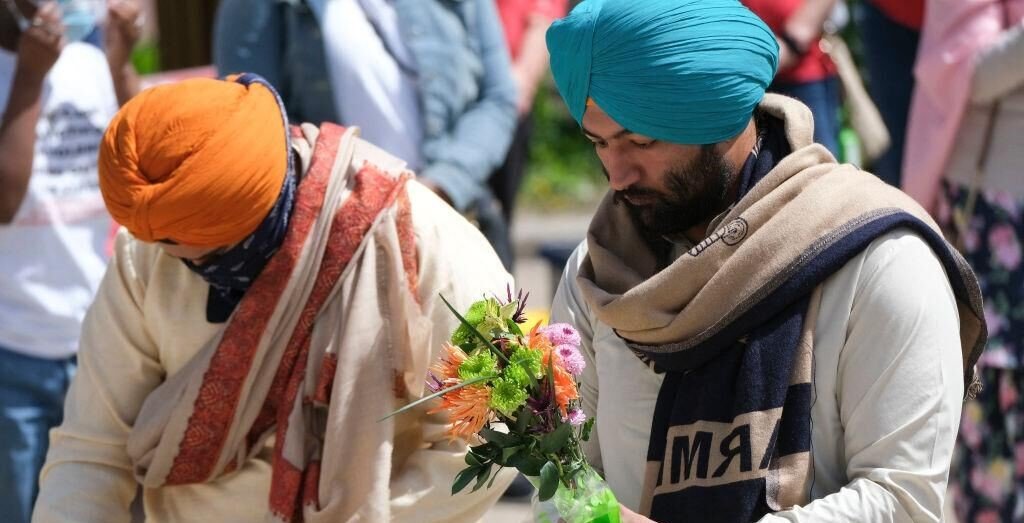 File photo of family, friends and Indian American community members attending a vigil in Indianapolis, Indiana on April 18 to remember the victims of a mass shooting at a local FedEx facility which took the lives of eight people, including four Sikh Americans. (Jeff Dean/AFP via Getty Images)

INDIANAPOLIS – Three members of the Sikh community affected by a mass shooting at an Indianapolis FedEx facility in April are seeking compensation from the city over claims that local officials failed to pursue a court hearing that could have prevented the shooter from accessing guns used in the attack.

An Oct. 12 letter obtained by The Indianapolis Star indicates that Harpreet Singh, Lakhwinder Kaur and Gurinder Bains, who were injured or lost family members in the April 15 attack, are each requesting $700,000 in damages from the city.

Lawyers for the victims said the Indianapolis Metropolitan Police Department and the Marion County Prosecutor’s Office failed to follow Indiana’s red flag law when they decided not to file a case with the courts to suspend the shooter’s gun rights in March of 2020.

The “red flag” legislation, which became law in Indiana in 2005, allows police or the courts to seize guns from people who show signs that they might be violence.

The lawyers say the law doesn’t give the authorities discretion and that they must file such cases with the courts. Had such a case been filed, the mass shooting could have been prevented, according to the letter that serves as a tort claim notice, which precedes a formal lawsuit.

Police said Brandon Scott Hole, 19, used the attack as an act of “suicidal murder.” Eight employees, including four members of the city’s Sikh American community, were killed and five others were injured.

Hole, a former FedEx employee, was able to legally purchase the two rifles used in the shooting, even after his mother called police in March of 2020 to say her son might attempt “suicide by cop.” Police seized a pump-action shotgun from Hole, then 18, when responding to his mother’s call.

Marion County Prosecutor Ryan Mears has since faced sharp criticism for choosing not to pursue the red flag court hearing that could have prevented Hole from accessing the guns used in the April attack. Mears said shortly after the attack that prosecutors didn’t pursue such a hearing because they didn’t have enough time under the law to definitively demonstrate his propensity for suicidal thoughts.

Mears, Indianapolis Mayor Joe Hogsett, and Indianapolis police Chief Randal Taylor have not commented on the tort claim, according to The Star.

Singh, who was shot in the head during the attack, still has a bullet lodged in the left side of his head between his ear and eye. His injuries resulted in “hospitalization, multiple surgical procedures, extensive rehabilitation, inability to work at full capacity, and continued physical and psychological injuries,” according to the letter.

Kaur was grazed by a bullet on her left underarm. She was standing behind Jaswinder Singh – Bains’ father – when he was fatally shot, and now suffers from psychological distress, the letter says. Bains is requesting compensation on behalf of his father’s estate.

The victims are being represented by Amandeep S. Sidhu of the Washington, D.C., law firm Winston & Strawn LLP. The Sikh Coalition is acting as co-counsel.