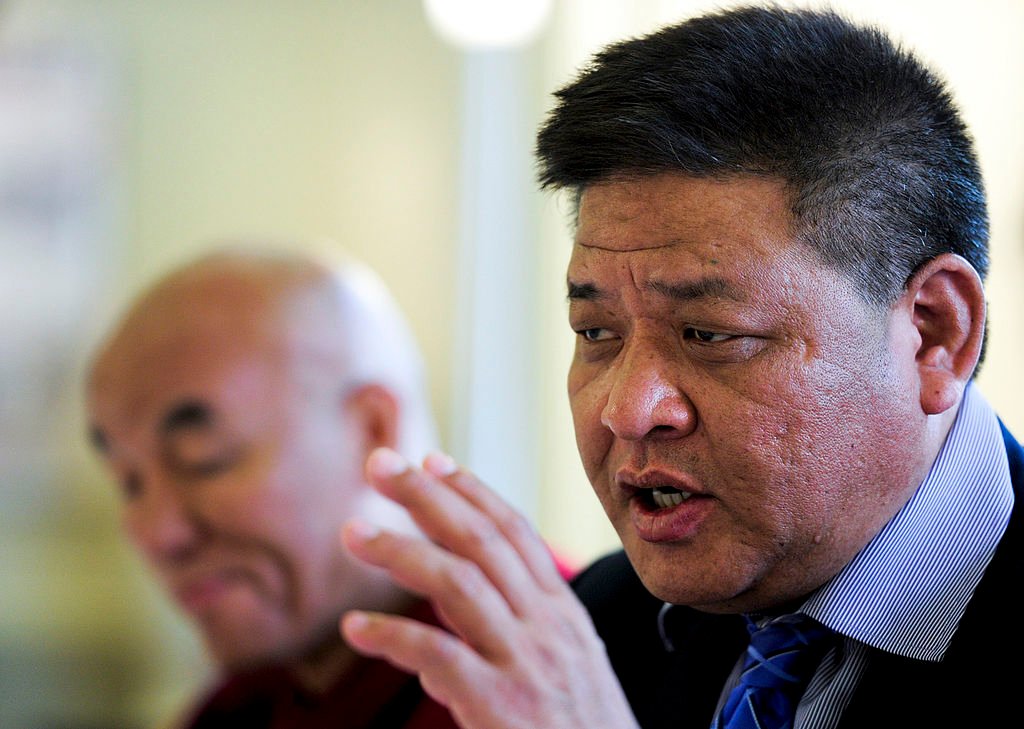 Penpa Tsering, the new president of the Tibetan Parliament-in-exile, attends a breakfast briefing at the International Press Center of Barcelona on June 15, 2010. (Josep Lago/AFP via Getty Images)

DHARAMSALA — The new president of the Tibetan exile government said June 17 he will do his best to resume a dialogue with China after more than a decade, and that a visit by the Dalai Lama to Tibet could be the best step forward.

The Buddhist spiritual leader “has expressed his wish to go to Tibet to his birthplace, Lhasa and some other places depending on his physical condition,” Penpa Tsering said in an interview with The Associated Press. The Dalai Lama lives in the northern Indian town of Dharmsala, where the exile government is based.

Penpa Tsering, 53, said the Dalai Lama is eager to settle the China-Tibet dispute and he “will leave no stone unturned” to achieve that.

China doesn’t recognize the Tibetan government-in-exile and hasn’t held any talks with representatives of the Dalai Lama since 2010. Beijing accuses the Buddhist leader of seeking to separate Tibet from China, which he denies. Penpa Tsering supports the Dalai Lama’s position.

Penpa Tsering, the former speaker of Tibet’s parliament-in-exile, was sworn in last month as president in Dharmsala, where the Dalai Lama has lived since he fled Tibet after a failed uprising against Chinese rule in 1959.

He said China should take “a middle-way approach” that would give autonomy to Tibetans allowing them to protect their culture and language, without full independence.

“That can bring some traction to the contacts or negotiations between the two sides,” he said.

He strongly criticized China for restricting the Tibetan culture and language, which he said is the foundation of Tibetan Buddhism.

“The language is very important but today it has become something only taught in a language class. All other subjects at school are taught in Chinese, and the Chinese leaders are not even following a two-language system in which you give equal weight to both languages. That, as well as the government policy of not publishing official documents in Tibetan, is striking at the very root of Tibetan existence. If our language goes, the religion will also go away slowly.”

Penpa Tsering is taking over the Tibetan government-in-exile at a time when Chinese President Xi Jinping is seeking to put his imprint on virtually every aspect of life across the vast county. China’s ruling Communist Party is pushing to Sinicize Tibetan life through programs that separate Tibetans from their language, culture, and especially, their devotion to the Dalai Lama.

China denies curbing religion in Tibet and says the Himalayan region, which has been governed by the Communist Party since 1951, has been Chinese territory since the mid-13th century. Many Tibetans say they were effectively independent for most of their history, and that the Chinese government wants to exploit the resource-rich region while crushing its cultural identity.

Some Tibetan groups advocate independence for Tibet since little progress has been made in talks with China.

Exiled Tibetans chose Penpa Tsering in elections held in January and April. It was the third direct election of the Tibetan exile leadership since the Dalai Lama withdrew from any political role in the running of the exile government in 2011. Nearly 64,000 Tibetans living in exile in India, Nepal, North America, Europe, Australia and elsewhere voted.

Penpa Tsering was elected to its parliament in 1996 and became its speaker in 2008. Last month, he succeeded Lobsang Sangay, who had completed his second five-year term as president. The 45 people elected to the exile parliament represent traditional provinces of Tibet, religious constituencies, and Tibetan communities abroad.

Penpa Tsering was born in India after his parents fled Tibet after the failed uprising against Chinese rule in 1959. “Since I haven’t seen my own country, we are basically Indians in that sense,” he said.