HomeIndiaIndia and the worldToronto Lights Up for India as 3,000 Ventilators Sent to New Delhi 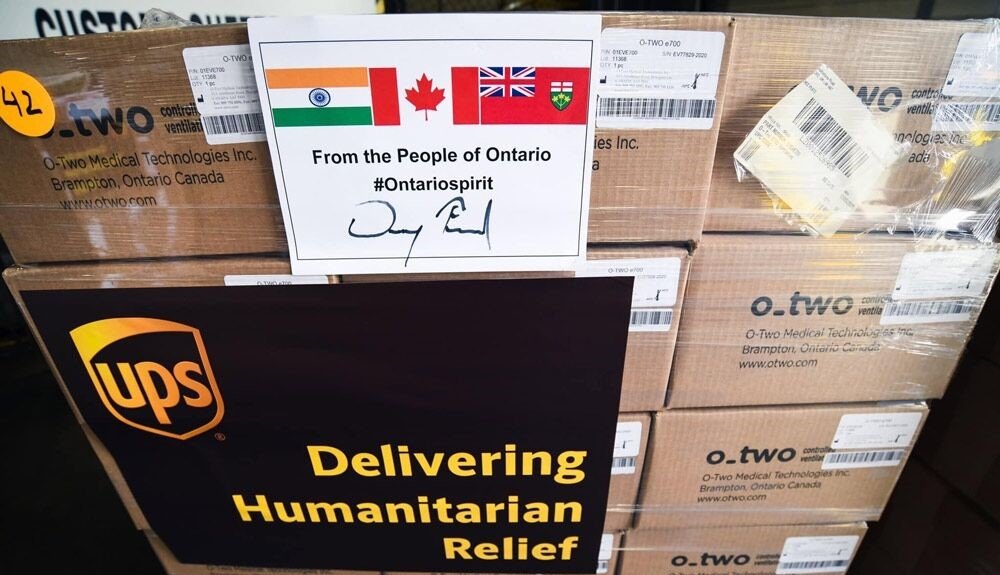 The city of Toronto in Canada has sent 3,000 ventilators to Delhi. (IANS photo)

TORONTO – Authorities in Canada’s Ontario province dispatched 3,000 locally made ventilators to New Delhi, even as the Indian-dominated city of Brampton illuminated its city hall with the Tricolor in solidarity with the people of India.

Ontario Premier Doug Ford and his economic development minister Victor Fedeli joined Indian Consul General Apoorva Srivastava and others in flagging off the shipment to India on May 6.

The Indian Red Cross will receive the ventilators, e700 Transport, which have been manufactured by O-Two Medical Technologies based in Brampton.

The ventilators have been donated in response to requests from the High Commissioner to Canada and the Consul General in Toronto.

“Today, I joined Minister Victor Fedeli, as well as Vikram Khurana, Paul Winters, and Apoorva Srivastava to send 3,000 Ontario-made ventilators to our friends in India,” the premier tweeted.

“I’ve spoken many times about the #OntarioSpirit and I am very proud to help our friends in need.”

Ford said: “We stand shoulder-to-shoulder with the people of India during these difficult times. Our government will keep working closely with His Excellency, Ajay Bisaria, High Commissioner of India, and Apoorva Srivastava, Consul General of India to Toronto, and stand ready to assist further with India’s urgent needs, for as long as we are able to. We are all in this together and we will all overcome this together.”

In solidarity with India, Brampton illuminated its city hall with the Indian Tricolor.

“Brampton City Hall was illuminated last night with the tricolors of India to show our solidarity with the people of India given the recent adversity with Covid-19,” Mayor Patrick Brown said.

Indo-Canadians make up about a quarter of the city’s population of over 600,000.