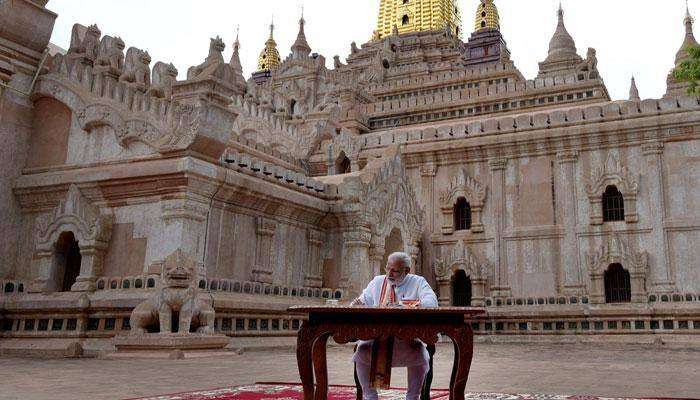 PM Modi during his visit to Bagan, Myanmar

Modi’s connection with Buddhism started at his birthplace Vadnagar. Historically, Vadnagar is one of the ancient towns of western India, an important center of the Sammitiya Buddhist school. The famous Chinese traveler Hiuen Tsang mentions `Anandpur’ in his book. Vadnagar was situated at a strategic location where two ancient trade routes crossed each other, one was from central India to Sindh and another from Gujarat coast to North India.

As Chief Minister of Gujarat, he started large-scale excavation of the Vadnagar monastery complex. The state archeology department made a stunning discovery of a large Buddhist monastery dating back to the 1st- 7th century and another excavation at Dev Ni Mori in northeast Gujarat, where sacred relics of Buddha were found. He had also started planning the creation of a Buddhist circuit in the state to woo tourists from around the world.

In 2010, Modi inaugurated the first International Buddhist Heritage meeting at MS University in Vadodara, where the Dalai Lama was also present. Talking about the presence of many monks in Gujarat and Buddhist teachings, Modi said that “During the time of the Maitraka kings, there were more than 13,000 monks in Gujarat. We also had one of the greatest Buddhist universities, the Vallabhi Buddhist University in Vallabhipur.”

His foreign visits have been filled with stops at Buddhist sites. “Wherever I have traveled in Asia – from the edge of the Pacific to the center of the Indian Ocean; from the seashores of Southeast Asia to the lofty heights of the Himalayas; from the thick forests of the tropics to expanse of these steppes – I see thriving monuments and temples dedicated to Lord Buddha”.

He described Bhutan as a natural choice for his first visit abroad as PM, as the two countries shared a “special relationship” which, accordingly to him; is cemented by the Buddha.

He reiterated the importance of Buddha, Buddhism and Buddhist heritage in India’s foreign policy during his speeches in Japan: “India is the land of Lord Buddha, who lived for peace and spread the message of peace across the world”.

During his visit to Mongolia in 2015, while addressing members of the Mongolian Parliament Modi said that “there was a time when the messengers of Lord Buddha linked Asia with his message of love and compassion. The shifting sands of time have not buried their footprints, because the value of their message never diminishes”. He visited the Gandan Monastery in Ulaanbaatar and gifted a statue of Lord Buddha to the monastery.

He became the first Indian PM to visit all Central Asian states – Uzbekistan, Turkmenistan, Kazakhstan, Kyrgyzstan, and Tajikistan in a single trip. “We share deep historical, cultural, and civilizational links,” Modi said. He reiterated that all central Asian nations of the ancient Silk routes shared the Buddhist heritage.

Amidst the busy schedule during his Russia tour in 2017, Modi visited the oldest Buddhist temple in Saint Petersburg, known as Datsan Gunzechoinei Buddhist Temple and gifted the Urga edition of the Tibetan Kanjur- a complete set of 104 volumes to the head monk priest of the temple.

Later that year PM Modi visited the Ananda temple in Bagan and offered prayers. Ananda Buddhist temple was built in 1105 AD and is one of the surviving masterpieces of Mon architecture. He also visited Shwedagon Pagoda in Yangon. In 2018, he visited Buddha Tooth Relic Temple and Museum in Singapore which was built in 2007.