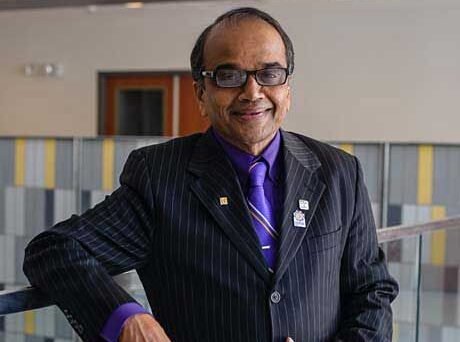 ASM International recently announced its class of 2021, with two Indian Americans named among the honorees.

Among the Fellows for 2021 were Dr. Govindarajan Muralidharan and Prof. S.K. Sundaram.

He was named a fellow “for significant technical contributions in the research, development, and commercialization of high-temperature alloys for use in harsh environments prevalent in industrial process, energy, and automotive applications.”

Muralidharan received his Ph.D. from the University of Illinois in the field of materials science and engineering. He has worked in the field since 1995, at such places as the Institute of Microelectronics and Argonne National Laboratories. He has six issued patents (two on sensors and four on novel alloys), and nine patent applications pending in the U.S. patent office, according to his bio on ornl.gov.

Sundaram is the Inamori Professor of Materials Science and Engineering at the Kazuo Inamori School of Engineering at The New York State College of Ceramics-Alfred University in Alfred, New York.

He was chosen “for significant contributions to millimeter and terahertz wave diagnostics of materials and processes, and integrated processing of materials.”

Additional Fellows may be elected to this distinguished body in subsequent years.

ASM International established the honor of Fellow of ASM in 1969 to provide recognition to ASM members for their distinguished contributions to materials science and engineering.

Recipients of one of the highest honors in the field of materials, ASM Fellows are technical and professional leaders who have been recognized by their colleagues and now serve as advisors to the society.

Their solicited guidance, provided by ASM Fellows to the ASM Board of Trustees, enhances the society’s standing as a leading organization for materials and provides a unique resource to serve the worldwide community of materials scientists and engineers in the years ahead.