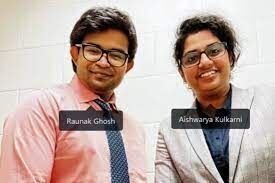 Two Indian American students at the University of South Florida Muma College of Business took the top prize at the Amgen Strategy Competition for a strategy proposal aimed at keeping a company’s workforce diverse, according to a USF press report. Their winning pitch beat out competing proposals from dozens of other universities across the country, the report said Dec. 10.

Aishwarya Kulkarni and Raunak Ghosh, both graduate students in business analytics and information systems program, won first place for presenting their career development strategies to maintain the percentage of diverse talent at all levels of hierarchy. The month-long competition culminated in an in-person pitch on Nov. 18 before a panel of senior leaders from Amgen, a biotech company.

The pair bested teams from the University of Southern California and the University of California-Riverside, who took second and third place, noted the report. In all, 100 students from 23 universities and colleges across the country took part in the competition. Teams were tasked to pitch a strategy from four different topics.

“Our main concept was the Human Library project, where people can express their stories of overcoming any biases or issues that they had faced and how they overcame those issues, which would inspire people in the organization and bring about a sense of inclusion with respect to empathizing certain scenarios,” Ghosh said, according to the news report.

The Human Library Organization is a nonprofit headquartered in Copenhagen, Denmark, which offers diversity and inclusion training to companies and institutions.

Ghosh said they also proposed companies emphasize diversity in exit interviews, host events based on the diversity, inclusion and belonging theme, and offer surveys to gather data on employee reactions to DIB policies and how they are treated by the company.

The pair was mentored by Amgen leader Arnold Eddula, who is the global head of operations in cybersecurity.