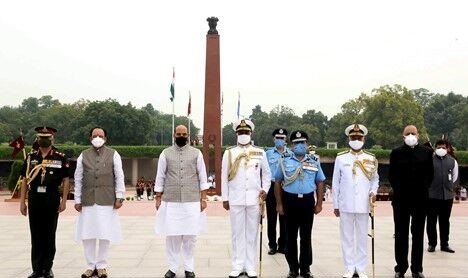 India’s Defense Minister Rajnath Singh at the National War Memorial to pay homage to the fallen heroes on the occasion of Kargil Vijay Diwas, in New Delhi on July 26. (ANI photo)

“The State Department has made a determination approving a possible foreign military sale to the Government of India of Harpoon Joint Common Test Set and related equipment for an estimated cost of $82 million,” the U.S. Defense Security Cooperation Agency said in a statement.

The proposed sale will support the foreign policy and national security of the United States by helping to strengthen the U.S.-India strategic relationship and to improve the security of a major defensive partner, which continues to be an important force for political stability, peace and economic progress in the Indo-Pacific and South Asia region.

The Harpoon is an all-weather, over-the-horizon, anti-ship missile developed and manufactured by McDonnell Douglas that uses active radar homing and flies just above the water to evade defenses.

The proposed sale of this equipment and support will not alter the basic military balance in the region.

The principal contractor will be The Boeing Company, St. Louis, Missouri.

In June 2016, Prime Minister Narendra Modi had visited the U.S. At that time, the U.S. recognized India as a major defense partner, which commits the U.S. to facilitate technology sharing with India.