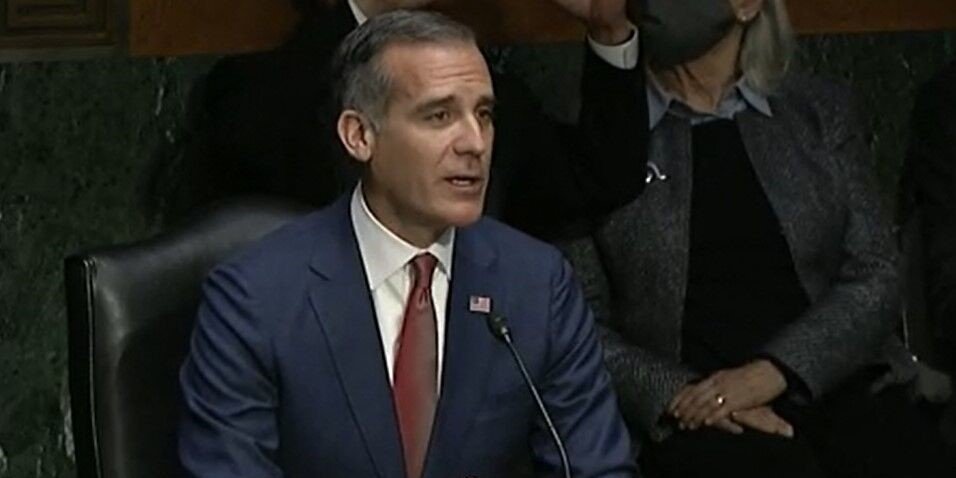 Eric Garcetti, the nominee for U.S. ambassador to India, speaks at the Senate Foreign Relations Committee hearing on his nomination on Dec. 14, 2021. “The bedrock of our partnership are the human ties that connect our nations, embodied by the four million-strong Indian American diaspora,” he said. (SFRC photo via IANS)

NEW YORK (IANS) – Los Angeles Mayor Eric Garcetti said Dec. 14 that he intends “to double-down on our efforts to strengthen India’s capacity to secure its borders, defend its sovereignty, and deter aggression” if he is confirmed as the U.S. Ambassador to New Delhi.

“India is situated in a tough neighborhood. Few nations are more vital to the future of American security and prosperity than India,” Garcetti said at the Senate Foreign Relations Committee hearing on his nomination.

He said that he would work to achieve India’s security “through information sharing, counter-terrorism coordination, joint freedom of navigation patrols and military exercises, which I have participated in as a naval officer alongside my Indian counterparts, and sales of our best defense technologies in order to realize the full potential of our major defense partnership.”

Nominees for ambassadorships and other senior administration jobs have to be confirmed by the Senate.

Garcetti’s nomination was announced in July, but it has taken five months for the Senate to start the confirmation process by holding Senate Foreign Relations Committee hearings. If the panel approves the nomination, it will go to the full Senate for a final vote.

The committee also took up the nomination of Donald Blome to be the ambassador to Pakistan.

Garcetti was a co-chair of President Joe Biden’s election committee.

Committee Chair Senator Bob Menendez said he welcomed Garcetti’s nomination “at a critical time in the U.S.-India relationship” when “India is a vital strategic partner for the United States as a member of the Quad alongside the United States, Japan and Australia. India is playing a greater role in helping maintain a free and open Indo-Pacific.”

On other items on his agenda for India, Garcetti said, “I intend to champion an ambitious economic partnership with India that reduces market access barriers and bolsters fair trade and creates good jobs for the American middle class.”

On human rights issues that were raised by the senators on the panel, he said, “Respect for human rights and strong democratic institutions are key elements of our strategic partnership and values enshrined in our constitutions, and if confirmed, I will engage closely and regularly with the Indian government on these issues.”

In his introductory remarks, Garcetti said that when he visited India in 1990 as the guest of then-Ambassador Bill Clark, whose son was his college roommate, U.S.-India ties “languished in the shadow of Cold War mistrust” and “the very idea of a U.S. India Strategic Partnership would have been deemed laughable.”

“Today,” he said, “The fundamental nature of that strategic partnership is firmly ingrained in both Washington and New Delhi. Twenty years ago, President (Joe) Biden – then chairman of this esteemed committee – called for a new and ambitious vision of U.S.-India ties. Thanks to successive administrations – Democratic and Republican – and the bipartisan work of this Congress, that strong new chapter is upon us.”

He said that inspired by his India visit, he had studied Hindi and Urdu in college, along with religious studies.

Garcetti also emphasized the people-to-people ties between the two countries because of the diaspora in both the nations.

He noted that the Indian American community “serves at the highest level, including our Vice President (Kamala Harris).”

“The bedrock of our partnership are the human ties that connect our nations, embodied by the four million-strong Indian American diaspora that strengthens our nation and the nearly two hundred thousand Indian students and tens of thousands of Indian professionals who contribute to our economy,” Garcetti said.

He said that about 950,000 U.S. citizens live in India and his priority would be to ensure their security and that of the U.S. missions.

Menendez, a Democrat, mentioned areas of differences between the U.S. and India with which he expected Garcetti to deal frankly.

“As we deepen our partnership with New Delhi, there will inevitably be areas of friction, including concerns related to India’s purchase of Russian military hardware and reports of democratic backsliding and discrimination against religious minorities,” Menendez said.

“New Delhi will need to address our concerns if it seeks to deepen our partnership even further,” he said.

Answering questions from senators on the panel, Garcetti said that India and the U.S. had “a very strong record together whether it’s in those supply chains or some of the innovations that we have.”

Garcetti, who has been an intelligence officer in the U.S. Navy Reserve, was asked about India’s purchase of the Russian-made S-400 missile defense system.

Senator Chris Van Hollen asked him about the danger from the system to security cooperation with India and about the deal possibly triggering U.S. sanctions, while also noting that there was a provision to give India a waiver.

Garcetti said that India was diversifying its defense purchases and called it “one of the great success stories of the last few decades.”

India’s defense purchases from the U.S. grew from zero to $20 billion, he noted.

He said the two countries have started intelligence sharing, developed have interoperability in defense, held joint military exercises and cooperated in the maritime area.

As someone “who’s served alongside my Indian counterparts to really deepen those people-to-people relationships in the military, the industrial coordination,” he said that he would “be very clear about what the threats are to our system, especially for new weapons systems in the future that would come from outside the United States or in this case, Russia.”