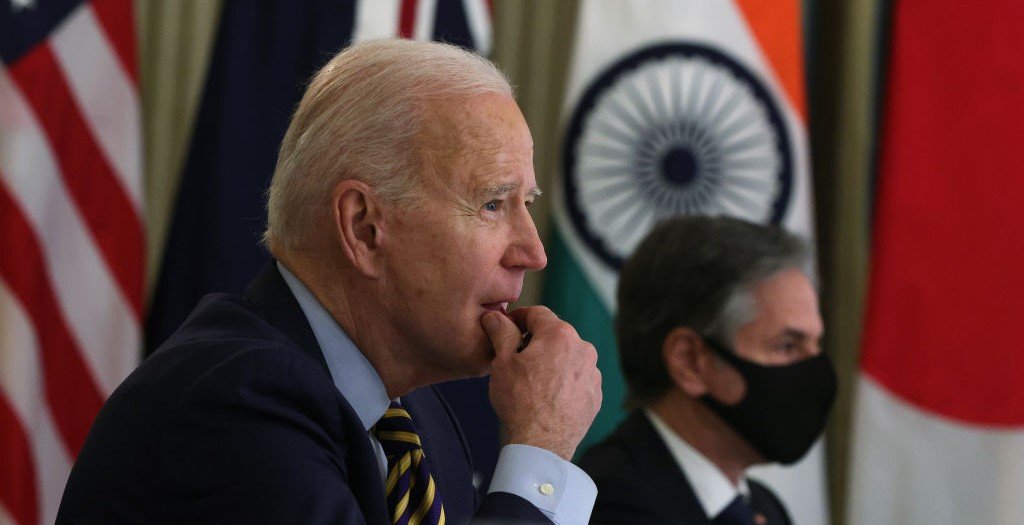 President Joe Biden and fellow leaders of the Indo-Pacific alliance known as the Quad are set to announce a plan to expand coronavirus vaccine manufacturing capacity in India.

The effort was being announced March 12 at a virtual meeting of the leaders of Australia, India, Japan and the United States. It comes as the Biden administration is putting greater emphasis on the Indo-Pacific region in the face of growing economic competition from China.

At the start of the meeting, Biden teased the forthcoming announcement, noting the alliance would be “launching an ambitious new joint partnership that is going to boost vaccine manufacturing … to benefit the entire Indo Pacific” region.

The effort by the alliance to pump up India’s vaccine manufacturing also comes as the Biden administration and leaders of other wealthy nations have faced calls from France and some global health advocacy groups to donate a small percentage of vaccine produced in the U.S. and other industrialized nations to poor countries. Biden has also fielded requests from allies, including Canada and Mexico, to buy vaccines made in the United States.

But the Biden administration has remained steadfast that, at least for now, it is focused on making sure that all Americans are first vaccinated even as China and Russia have engaged in vaccine diplomacy, sending badly needed vaccines to other countries. Administration officials have noted the United States’ $4 billion commitment to COVAX, an international effort to bolster the purchase and distribution of coronavirus vaccines to poor nations.

“If we have a surplus, we’re going to share it with the rest of the world,” Biden said earlier this week at an event where he announced that the U.S. had acquired an additional 100 million doses.

Biden was joined March 12 morning by Vice President Kamala Harris, Secretary of State Antony Blinken and other top national security aides for the meeting, which was being held virtually because of the pandemic.

The effort by the Quad is projected to allow India to increase manufacturing capacity by 1 billion doses by 2022, according to two senior administration officials who briefed reporters ahead of the meeting.

But the effort is already deemed not ambitious enough by some groups advocating for Biden to press for the World Trade Organization to allow a temporary waiver of the body’s intellectual property agreement. That would pave the way for generic or other manufacturers to make more vaccines.

The United States, Britain, European Union nations and other WTO members on Wednesday blocked a push by more than 80 developing countries to grant the waiver.

Each of the four nations has a complex, if not strained, relationship with China. Biden, in his calls with each of the leaders during the first weeks of his administration, has stressed the need for cooperation on China.

Australia’s relationship with China has soured over a series of trade disputes.

India is in the midst of a 10-months-long military standoff with China along their disputed border in eastern Ladakh. Tens of thousands of soldiers are facing each other at friction points in the region.

Biden, in his first call with Suga days into his administration, underscored his commitment to protecting the Senkaku Islands, a group of uninhabited islets administered by Tokyo but claimed by Beijing, according to the White House.

The White House is also expected to announce on March 12 that Biden will host Suga for the first in-person foreign leader visit of his presidency, according to a senior administration official. A date has not been set for the visit.

“A free and open Indo-Pacific is essential,” Biden told fellow Quad leaders at the start of meeting. “The United States is committed to working with you, our partners, and all of our allies in the region to achieve stability. This is a group particularly important because it is dedicated to the practical solutions and concrete results.”

Morrison said there was no reason for China to object to the leaders’ meeting.

Blinken has made clear that the Democratic administration believes the best counterweight to China is for U.S. allies to stand together

“The more China hears not just our opprobrium but a chorus of opprobrium from around the world, the better the chance that we’ll get some changes,” Blinken told the House Foreign Affairs Committee this week.

Biden administration officials wanted to first hold the meeting of the Quad — an alliance that grew out of the response to the 2004 Indian Ocean tsunami that killed some 230,000 people — and additional meetings with Pacific partners ahead of their first face-to-face, high-level meetings with China.

The Associated Press has documented widespread forced birth control and forced labor of the Uyghurs. President Donald Trump’s last secretary of state, Mike Pompeo, in the final 24 hours of the Republican administration, declared that China’s policies against Uyghurs, who are predominantly Muslim, and other ethnic minorities in Xinjiang were “crimes against humanity” and a “genocide.”

“I know that addressing the genocide against Uyghur Muslims is something that will be a topic of discussion with the Chinese directly next week,” Psaki said.

AP Writer Rod McGuirk in Canberra, Australia, and Jonathan Lemire in Washington contributed to this report.