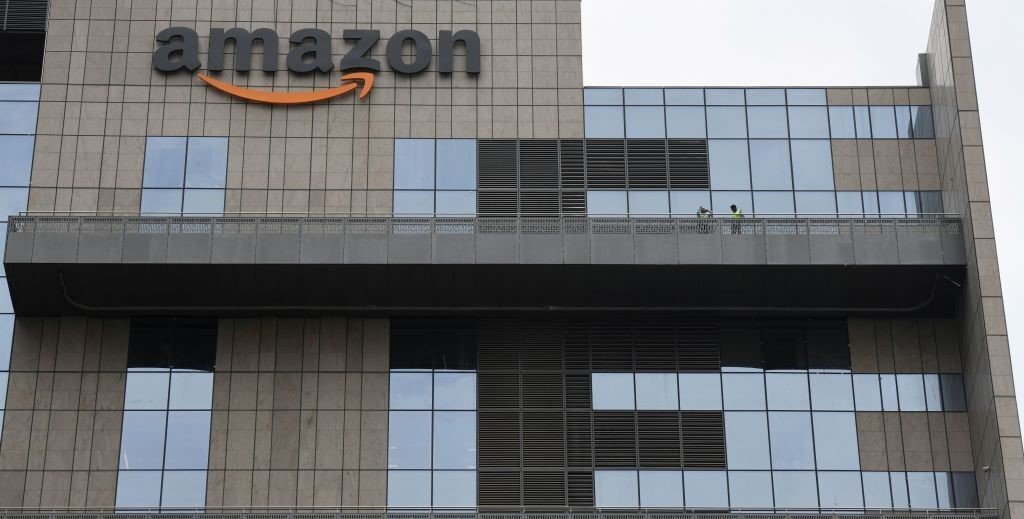 Indian workers (r) stand beside a logo at Amazon’s newly inaugurated largest campus building in Hyderabad on August 21, 2019. Global News Wire reported in February that the company had favored certain sellers on its website in India and bypassed local laws that requires foreign e-commerce companies to treat all vendors equally. (Noah Seelam/AFP via Getty Images)

NEW DELHI – U.S. officials rushed to defend Amazon’s business practices in India after Global News Wire reported in February that the company had favored certain sellers on its website and bypassed local laws that requires foreign e-commerce companies to treat all vendors equally.

Global News Wire reported that emails obtained through the U.S. Freedom of Information Act from the office of the United States Trade Representative showed that U.S. officials prepared a note for John Kerry, a top envoy of President Joe Biden, about the February 17 report.

The note, contained in an email dated February 18, said that India’s antitrust watchdog had reviewed many such allegations against U.S. e-commerce companies and found nothing wrong.

Biden’s envoy, former U.S. Secretary of State Kerry, is in charge of climate change policy. He was scheduled to speak that day with India’s Commerce Minister Piyush Goyal. The U.S. government was concerned that Goyal would bring up the Global News Wire story, so it hastily drafted a note about the article in case he did, the emails show.

“This could come up in the call since as you know Minister Goyal is prone to bring up tangential topics,” Thomas Carnegie, a U.S. Embassy official in New Delhi, emailed an official at the USTR.

Philip M. Ingeneri, another U.S. Embassy official, also told the USTR official in an email on February 18 that he had “verified” the contents of the note prepared for Kerry with Amazon India’s government affairs chief as “true and accurate.” The emails do not describe what ultimately happened during the Kerry-Goyal call.

The U.S. Embassy in New Delhi referred questions to the U.S. Department of State in Washington, which said it expected that any issues regarding U.S.’ e-commerce companies’ practices in India would be reviewed by the Competition Commission of India (CCI) “with the same level of independence, transparency, and professionalism it has demonstrated in the past.”