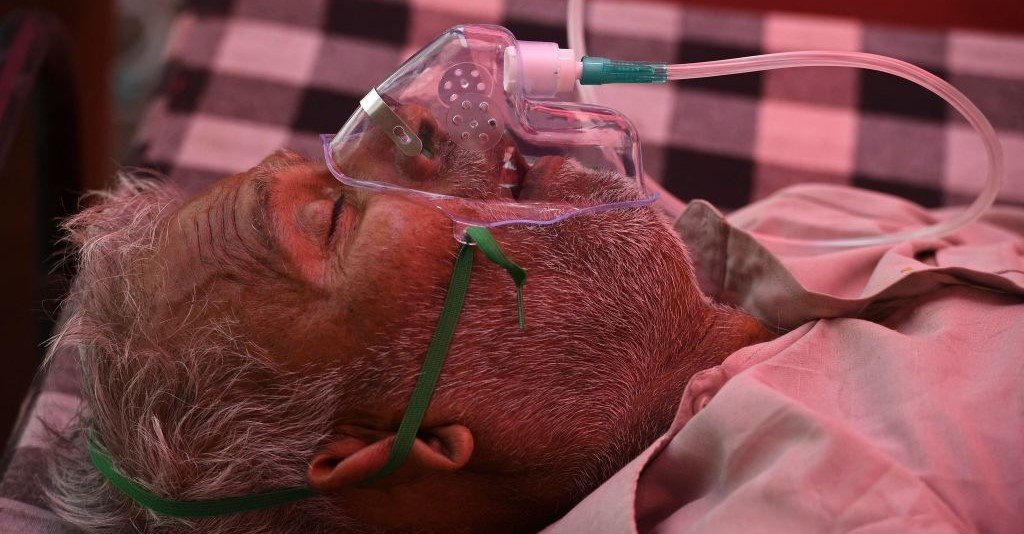 A patient breathes with the help of oxygen provided by a Gurdwara under a tent installed along the roadside amid Covid-19 coronavirus pandemic in Ghaziabad on May 4. (Tauseef Mustafa/AFP via Getty Images)

Senate India Caucus co-chairs Mark Warner, D-Virginia, and John Cornyn, R-Texas, along with Sen. Rob Portman, R-Ohio, wrote to Secretary of State Antony Blinken May 5 urging him and the Biden Administration to speed up emergency Covid aid to India.

“As you know, India’s healthcare system and infrastructure are struggling to meet the challenges posed by the current and largely unchecked surge, with the country averaging more than 300,000 new infections every day,” said the senators.

“We urge you to work with the Department of Defense and other U.S. government agencies, as well as with our international partners and private sector partners to transfer more lifesaving equipment, vaccines and other support to India as quickly as possible.”

“The United States must work with the Indian government on their response, as well as continue to lead the international efforts to stop the spread of variants and to deliver the assistance needed to the Indian people,” wrote Cornyn, Portman and Warner.

India May 5 reached a new daily high of 400,000 new infections in a single day. Public health experts state that India’s reported numbers are about five times lower than reported numbers, with at least 10,000 deaths per day.

At a press briefing that morning, organized by Ethnic Media Services, Warner noted that the Biden Administration has pledged a $100 million Covid aid package to India with oxygen cylinders, oxygen concentrators, therapeutics, and personal protective equipment including N95 masks, among other critically-needed supplies.

“We need to get vaccines on the streets and India and oxygen and ventilators, not a month from now, but tomorrow,” stated Warner, noting that U.S. supplies have already begun arriving in India.

“This is a global pandemic. No country is an island. The fact that we have a declining number of cases in the U.S. does not mean we are safe,” the senator asserted, noting new hot-spots in Argentina, Uruguay, and Brazil, where the rate of infection per capita is spreading even more quickly.

“So this is really a time again for the world to come together. And it is a time for America to assert its leadership particularly because of the growing strength of the U.S-India relationship. I have been proud of the fact that the American government is acting quickly,” said Warner, joking that, as co-chair of the Senate India Caucus, his phone has been “blowing up” with Indian American friends hoping to find a way they can help mitigate the crisis.

In their letter to Blinken, the senators commended the Administration for the $100 million aid package, but added: “We also believe there is more we can do, both to mitigate the tragedy unfolding in India and to ensure that the explosion of cases in India does not undercut global progress to combat this virus.”

Warner said at the EMS briefing that the Indian government is struggling with setting up field hospitals. The U.S. can provide the equipment but also the logistics of set-up, he said.

“We see the images of people in Delhi, Kolkata, and elsewhere being turned away from hospitals for a lack of oxygen, or lack of beds,” he said, noting that the crisis is expected to last at least until the end of May. “It is really our responsibility, as the world’s largest economy to be there for India.”

Warner commended the efforts by American corporations to provide aid to India, as well as the large number of private-public partnerships that have quickly emerged.

In their letter the senators urged the Biden administration to take further steps to help India by continuing its robust contribution to the World Health Organization’s COVAX plan. COVAX provides tests, vaccines, and therapeutics to low and middle-income countries around the globe.

Addressing the 60 million doses of the Astra Zeneca vaccine that will be released by the U.S., the senators wrote: “A detailed public strategy on how the Department of State plans to distribute these excess vaccines would clarify the ambiguity surrounding future U.S. policy and provide needed certainty to India.”

The senators also spoke out against Russia and China’s disinformation efforts. “Specifically in India, disinformation has undermined the public health response, heightened already-tense religious tensions, and muddied the waters surrounding our support as they face an unprecedented surge in coronavirus infections.”

At the briefing, Warner also chastised the Modi government “for limiting journalists and Indians themselves who are raising legitimate questions in social media.”

“If the government is using its tools to try to limit accurate reporting of the spread of the virus that is very dangerous. We need to encourage all governments to be transparent. This is a crisis, but hiding the level of the crisis will not lead to a quicker solution,” he said.

According to an ANI report, Indian American Congressman Raja Krishnamoorthi May 4 called on the Biden administration to deploy AstraZeneca vaccines rapidly in India.