HomeAmericasUber Cup Badminton: Indian Women’s Team Get 4-1 Win Over US

Uber Cup Badminton: Indian Women’s Team Get 4-1 Win Over US 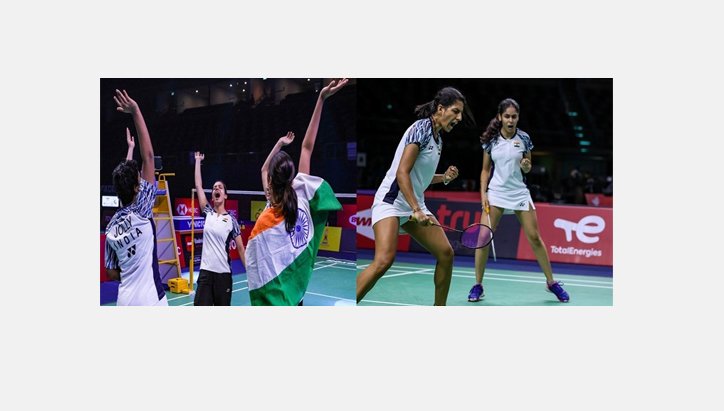 Uber Cup Badminton: Indian Women’s Team Get 4-1 Win Over US

BANGKOK, (IANS) – The Indian women’s badminton team sealed its place in the Uber Cup 2022 quarterfinals after registering a 4-1 win over US in their Group D tie, here on May 10.

The Indian shuttler dominated the match right from the beginning and raced to 16-4 lead in the first game. There was no looking back from there on for Sindhu as the world No. 7 sealed off the contest with ease in 26 minutes.

Thereafter, Tanisha Crasto and Treesa Jolly doubled India’s advantage with a solid 21-19, 21-10 victory over Francesca Corbett and Allison Lee. The Indian duo was trailing 5-11 in the opening game but produced a fine comeback to take the lead.

The second game was a much more straightforward affair as Crasto and Jolly cruised to a 12-0 lead before closing the match off in 34 minutes.

Aakarshi Kashyap then confirmed the tie for India with a 21-18, 21-11 win over Esther Shi.

Lauren Lam and Kodi Tang Lee pulled a point back for Team USA, edging out Simran Singhi and Ritika Thaker 12-21, 21-17, 13-21 in the second doubles match of the tie.

However, youngster Ashmita Chaliha completed the 4-1 score line for India after accounting for Natalie Chi 21-18, 21-13 in the final rubber of the day.

The victory on May 10, coupled with their 4-1 win over Canada on Sunday, ensured India a top-two finish along with South Korea in the Uber Cup Group D and in extension, a berth in the top-eight. India and Korea will meet on Wednesday to settle the group winners.

Earlier, the Indian men’s team had secured their quarters berth in the Thomas Cup and will also be in action on Wednesday for their final Group C encounter against Chinese Taipei.

Notably, both the Indian men’s and women’s teams were ousted in the quarterfinals of the Thomas and Uber Cup 2020 held last year.